Is light the only difference? Or does the camera and lens make all the difference?

Look at this stunning portrait: 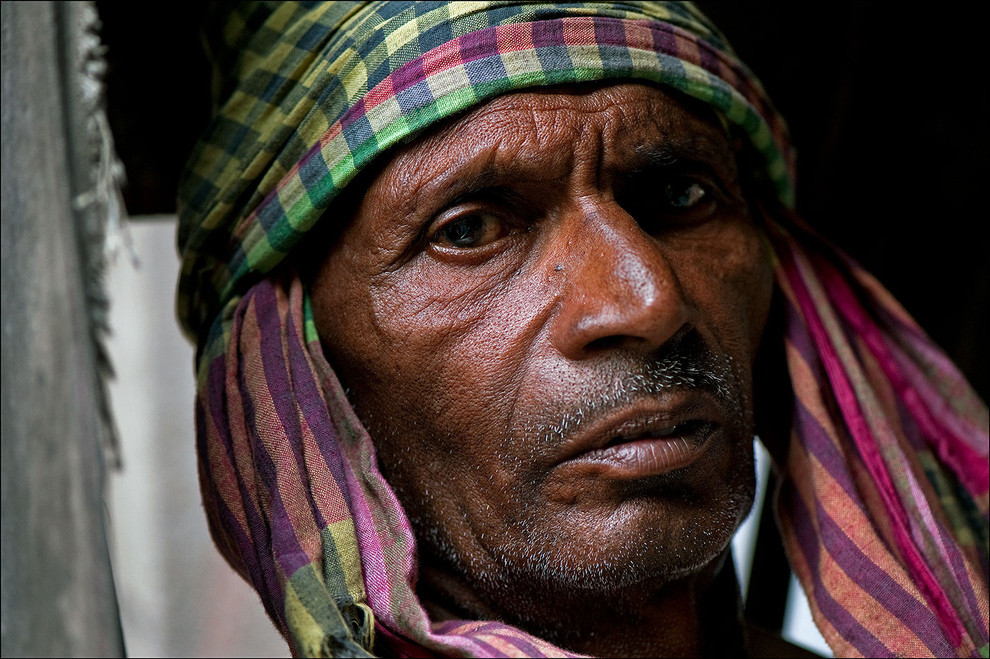 Let's ignore everything but JUST the amount of detail the photograph succeeds to convey.

Now look at one of the best portraits I have taken of my girlfriend, as a beginner with a 700D and 18-135mm IS lens: 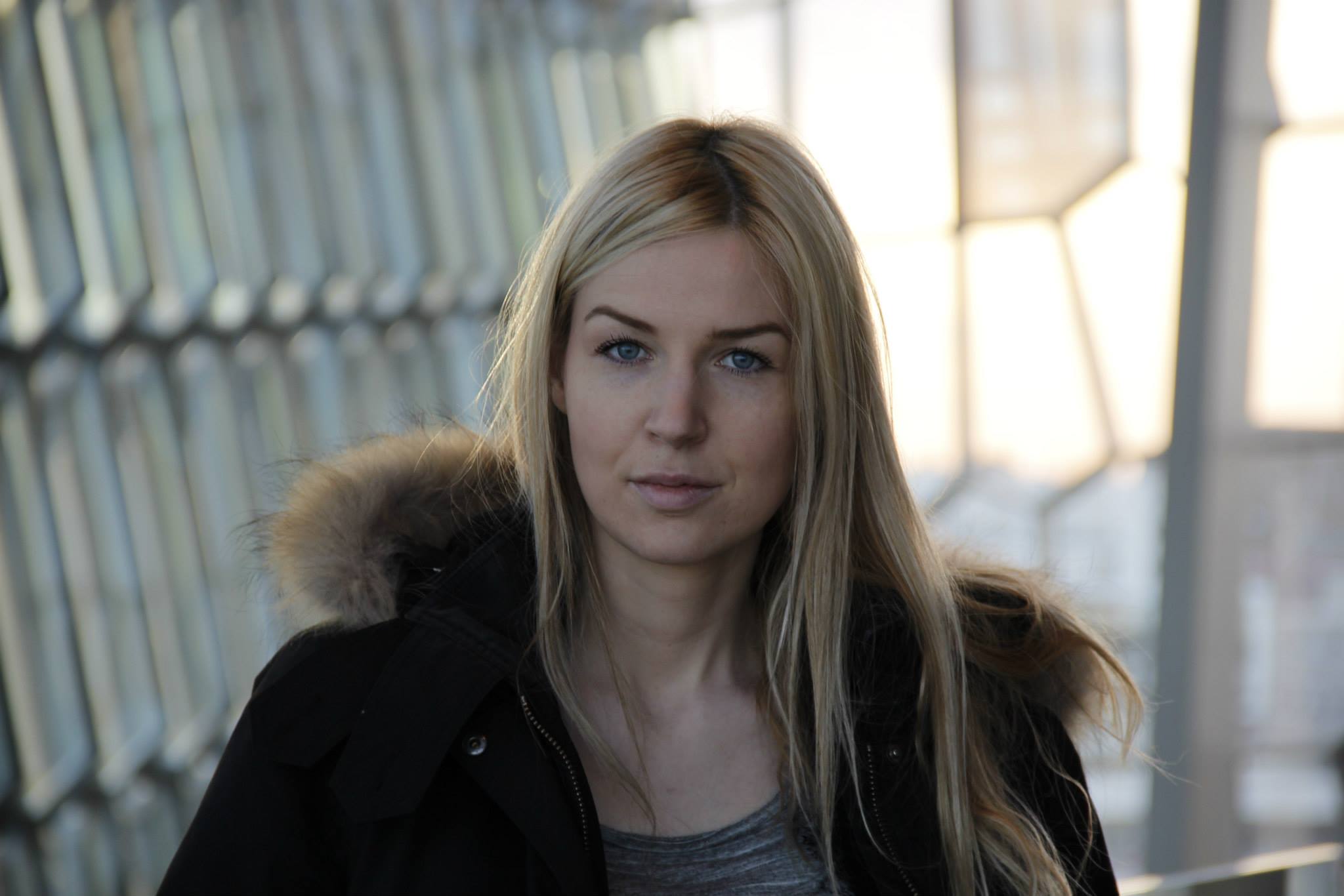 My photograph looks as if it is taken by a mobile phone in comparison. Is this mainly lightening, camera model, lens or a mix of all? What is the photographer doing that I fail to do? I'd really like some tips!

As others have said, it's largely lighting. As much as people like to moan about the quality of "entry level" cameras and affordable lenses, almost anything beyond point-and-shoots and camera phones these days is actually better from a purely picture-making perspective than anything the dedicated professional small-format photographer had in his/her arsenal when I was a youngster. (Ruggedness and "build quality" are another matter, and have more to do with reliability and longevity than with picture quality.)

It is very difficult to tell exactly what your camera captured because of the high amount of JPEG compression, but a rather quick trip through Photoshop to simulate a slightly contrastier, but otherwise similar, light yielded this: 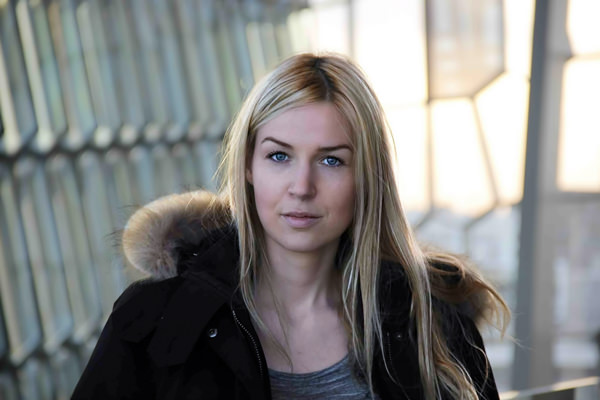 Very little was done to the image; it consisted mostly of applying a curves layer (set using "Auto" just on the face and shoulders) and masking it to the subject only. The curve was then pulled back to about 80% opacity because I've learned over the years that when it looks good to me, I've overdone it. (I'll always thank myself for doing that the next day.) That introduced — or, rather, enhanced — some colour artifacting, which I cleaned up to keep the image from looking, well, unfortunate. I used samples of good skin tone on a layer set to Color blend mode above the low-frequency layer of a frequency separation, in case anyone's interested. (Working from a raw image or a clean high-quality JPEG would have made that step unnecessary; without it, working on the supplied image would have been unflattering to the point of insulting the subject. By the way, I have reason to believe that a full-rez, HQ version of this image could easily become a wall-hanger with only a few minutes of work.)

Conversely, sucking all of the contrast out of the other example image (both locally, to simulate much softer light, and globally to simulate flatter light) results in this: 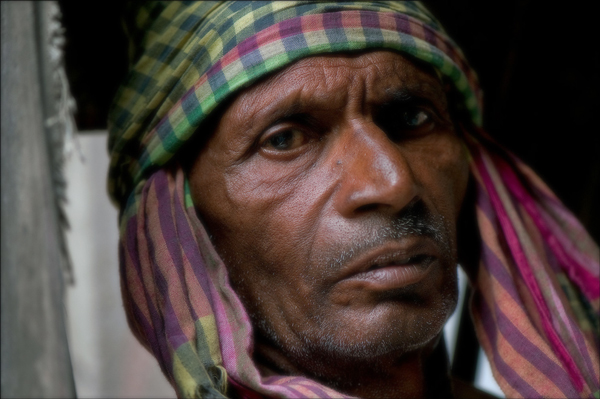 (My apologies to the original photographer. I will gladly take it down upon request.) Please note that I haven't blurred anything in any way, I have simply reduced the contrast of the small details (under 3 pixels). This may well be very close to the image as it came out of camera; there is really no way to tell. And no, there's nothing much I can do with the image to overcome the size of the subject in the frame, the courseness of the man's complexion compared to the lovely subject above, or the stark difference between the specular reflections on this subject's skin and the darker skin tone. But still, as it stands it's a lot more point-and-shoot than "stunning portrait" at this point.

The point was to demonstrate that "detail" is really just contrast. A very high-quality lens on a very high-quality, high-resolution sensor can generate smaller, more localised contrast, so there is some point to using better equipment. But while flat, soft lighting is "safe" and easy to use with people, that "safety" consists mostly of avoiding details that may not be entirely flattering. More contrast and more attention paid to where the highlights and shadows are falling is more difficult and "dangerous", but it almost always results in better pictures (for some value of "better"). And yes, you may need to process out some amount of detail after capture/development, but while softening parts of an image (or healing problems) can solve the "too much detail" problem, no amount of sharpening can add detail that wasn't there to begin with. Mind you, the bumped-up version of your image is still very soft lighting, it's just no longer as flat as in the original.

Shade is a wonderful thing, but look for shade that forces a direction to the light. Stay close to the entrances to shady areas. When you use fill, don't overfill. Contrast (within reason) is your friend. And if the contrast is there in the captured image, but at a lower level than you'd like, it's often just a matter of bringing it to the fore to go from meh to stunning — it's just a matter of knowing when and how to do it, of recognizing the cut diamond in the rough stone.

Mainly things are different, here's a few big ones:

Others have already pointed out lighting and some things to do in post processing. Those are important and the primary issue here, but I want to point out something else, which is framing.

Think of the whole frame, and how your subject relates to the whole frame. And always remember that you can rotate the camera. Every picture, ask yourself whether what you want to capture is wide or tall. When taking a picture of a person, you almost never want a small head in the middle of a horizontal picture. Beginners will focus on the person's head, therefore point the camera directly at the head, and shoot. That is understandable, but rarely results in a good picture.

This is where learning to take good pictures makes a difference. Force yourself to consider vertical versus horizontal every picture you take. Then force yourself to think how the subject fills the frame, what else is in the frame, and how that works with the intended subject.

In your case, there was a lot of superflous stuff in either side. The fact that the background is out of focus actually helps. However, the bright area in the top right corner is a serious distraction. In this case, one possible solution might have been to walk more to your right or have your girlfried move more to her right so the sunlit object is no longer in the frame.

The other issue is filling the frame. This is a case just crying out for a vertical orientation (in my opinion, of course). Here is your picture cropped and re-oriented: 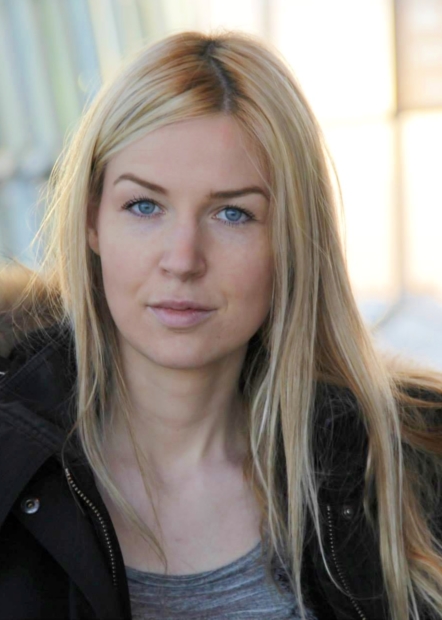 I also lightened up the forground a bit, but that's not the point I am trying to make. Stan already went into that quite nicely, so I only did minimal post-processing. Given the original, there is not much that can be done about the bright area in the upper right without extensive post-processing. Again, my point here is framing, not lighting.

In this case I liked how her hair flowed down over her left shoulder, so I moved her head to left of center in the picture and let her hair be a feature in the lower right corner. Otherwise, I only left a little margin of background around what the picture is trying to show.

There are also some good points about your picture. You managed to capture a great casual look. She is clearly aware of you taking the picture, but isn't "posing". The result lets her natural beauty show thru without looking artificial. It is often difficult to capture this, even with people that know you. The natural reaction of most people when you point a camera at them is to freeze up and pose. This rarely results in good pictures. It is the photographer's job to get the subject to present themselves the way you want to show them.

Right off the bat I can see that there's a difference in the direction of light. Your model is in shadow while the man is being lit from the side. You have soft lighting which is usually preferred for women and the old man has a harsher light which can emphasize the oldness of his age (typically not desirable for women).

The old man is probably "underexposed" as the camera would see it so either exposure compensation or manual control is used. Your picture would probably look better (in my opinion) if it was brighter. It also looks like your picture is an unprocessed RAW where all the tones are middle grey because you didn't adjust the white and black points. The old man may have more saturation/vibrance as well.

Composition is also important. Your picture is very loose whereas the old man is cropped very tightly. I'm not sure about how sharp your lens is, but if you were to have the same composition, nail the focus, and use an appropriate aperture I'd bet you'd have more detail. Though this goes back to the lighting. The side lighting on the old man is going to emphasize his texture whereas your shade is going to minimize it.

It is both the lighting and the lens. The picture you are taking is has a background brighter than the subject and that will always make the subject look subdued. You can compensate for this either by altering the position of the subject so that the lighting is better or using a powerful enough Speedlight to act as a fill.

Additionally, the first photo is taken with a much sharper lens. In your photo, if the lens was sharp enough, you'd still be able to make out the detail, it just wouldn't be particularly standing out. But you can't make out the detail because the lens isn't as sharp.

Additionally, your shot is taken from further away and thus doesn't fill as much of the frame, which further reduces how small of details you can capture.

The differences are - roughly in this order:

So there is a whole bunch of skills plus some equipment, that an excellent photographer needs to master.

Not the answer you're looking for? Browse other questions tagged canon portrait technique shooting-technique or ask your own question.

0
Is 35× zoom the only meaningful difference between the Canon Powershot SX 40HS and Olympus Pen E-PM1?
0
Is focal range the only significant difference between Canon's EF-S 18-135 IS and 18-200 IS lenses?
5
Does having the AF points bunched up in the middle make a big difference?
7
How does the Canon EF-S 15-85 IS USM compare to the EF 24-105mm L as an all-around lens?
0
Style with dim background, warmer tones and subject being almost the only light-emitter?
1
Why does my Sigma lens make a high-pitched ringing noise on my Canon camera?
0
My camera keeps getting the static effect and it shows in all of the photos.. What is the problem?