Why does opening photos in Windows preview result in a yellowish tint?

I have a weird case wich I expect someone can solve. I have edited some photos in Lightroom and exported them to Flickr. When I download them in another computer and open them in the Windows Preview (don't know how it's called in English) I see them with a yellowish tint over them (as I would see with my sunglasses on :P).

I suspect it has something to do with color spaces (sRGB, AdobeRGB,...), but I've never looked into that so I'm not sure.

Update: This is how I see it: 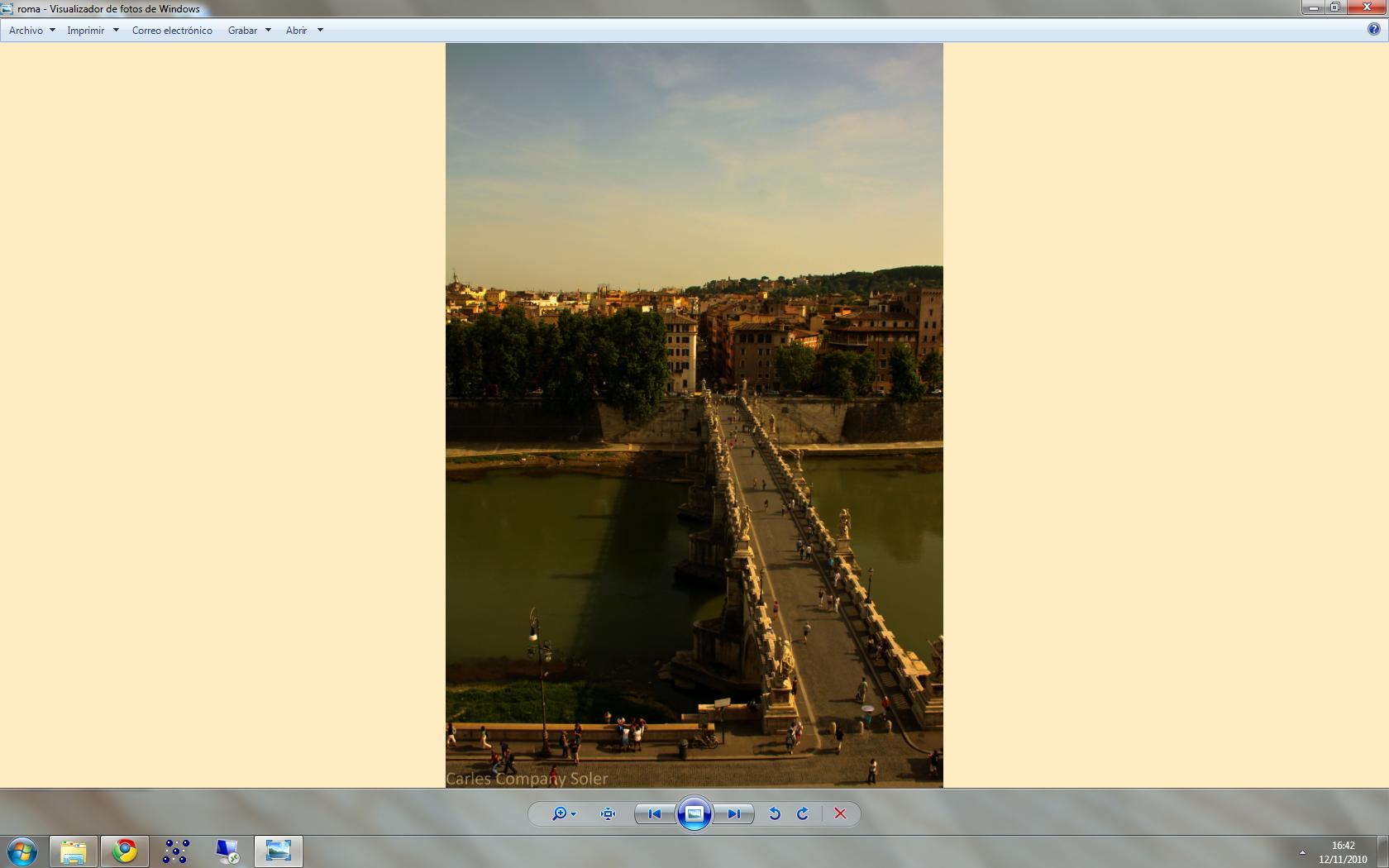 And it only appears like this with this program.

This isn't exactly an answer, but since I have the same problem, I thought I would post with an example. 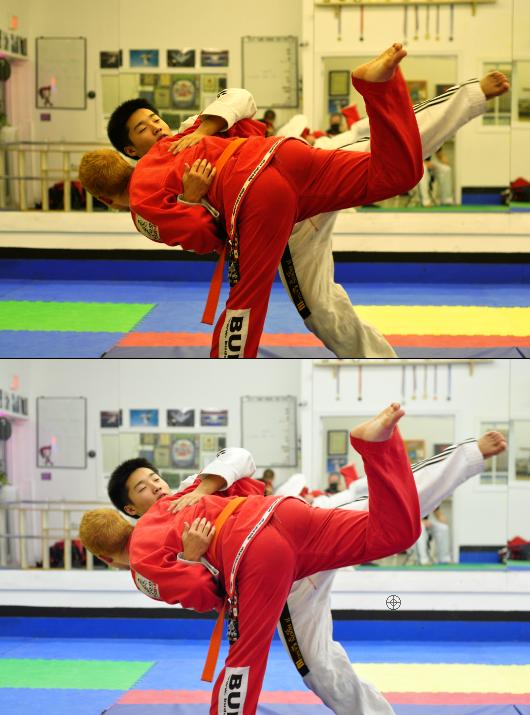 Notice that the top half has significantly more yellow-tinge than the bottom.

Here's where it gets weirder. I moved the same two applications with the same photo to my secondary monitor (an Optiquest Q19wb), and took screen captures again. Note that the difference between the top and bottom halves is much less. 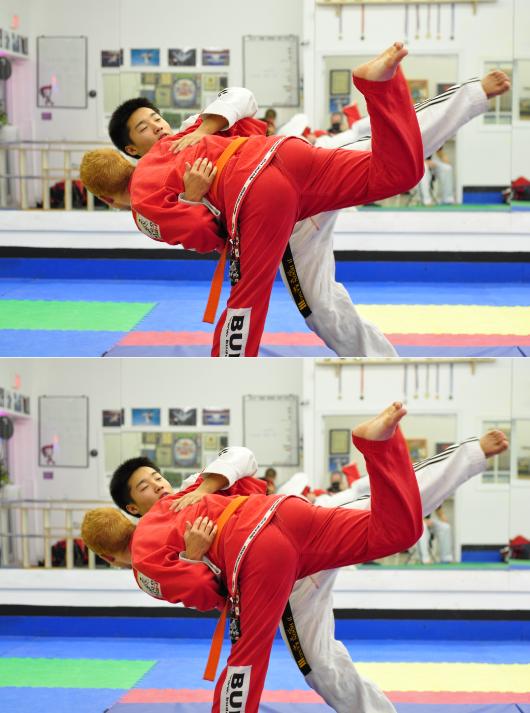 It would seem to me that Windows Photo Gallery is trying to do something with the white balance based on the monitor profile? (BTW, Windows Live Photo Gallery does the same thing). If I use Paint, it looks the same as Photoshop.

I haven't imported this photo into Lightroom V2.x yet, but from experience, it seems to me that Lightroom is trying to do the same thing as Windows Photo Gallery (that is, it makes the photo look yellower on my main monitor).

Again, this is not an answer, but maybe provides more info on the problem?

If it's the case that you edit the photos on one computer and then download them on another and see a yellow tint, the most likely cause is that one or both of the monitors are not calibrated and thus the colours in the image are not represented properly.

Viewing conditions also play a part - if you're editing the photos in a room with an artificial yellow light you're eyes will adjust and cause you not to notice a yellow tint to the image.

However looking at the image myself it doesn't look overly yellow so I suspect it's the monitor you're downloading it on that has a problem. You can have a go a calibration it by eye but for best results you need a hardware colorimeter.

Colour spaces can cause problems as you state, but it's typically programs which don't read colour spaces taking an AdobeRGB image and displaying it with the sRGB colour space. As the Adobe space is larger, the colours you typically get in a photo are further from the edges of the space (colours get more vivid toward the edge), so when you take the same numbers and interpret them using the sRGB space, the colours appear muted.

edit: I wouldn't expect to see a colour shift due to improper use of the sRGB and AdobeRGB profiles since white and grey tones are represented using the same numbers in both cases so those tones will always look the same no matter which of the two profiles gets applied.

It's possible you applied some other profile in Lightroom which is responsible. In any case your best defence is to convert to sRGB in Lightroom (or specify this space when covering your Raw). This will solve most problems as apps which are unaware of colour profiles tend to assume sRGB (and those that are aware should load the embedded sRGB profile!)

Most likely you are using a Samsung Monitor. Heres how to correct it:

Screenshot of change below: 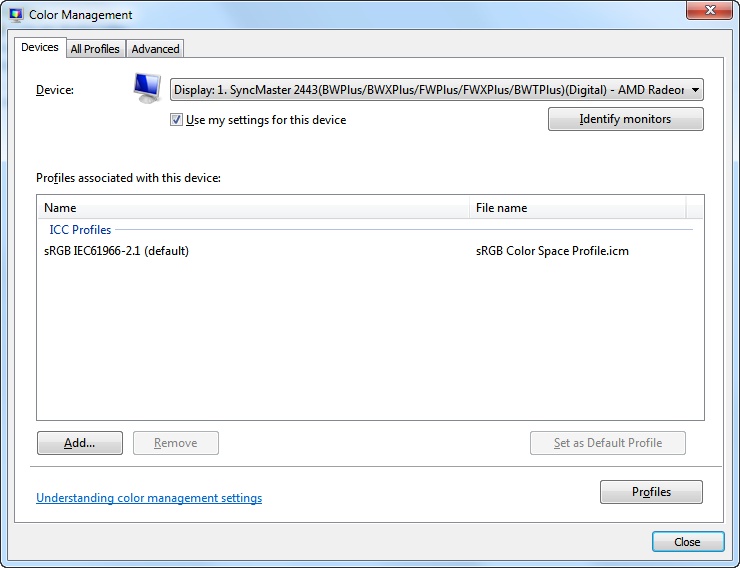 The yellow background in Photo Gallery is telling you that color management is not being used. It's intentional, but unfortunately not very user friendly.

SeanMC is seeing strange behavior with his 2 monitors because one is running color management, and the other is not.

You want color management. It's the only way to know that the colors you are seeing on your screen are the same colors other people will see on their screens, or when the image is printed.

A quick search on Google for Samsung Colour profiles will turn up a lot of info on this topic. Mostly saying it's an issue with the Samsung colour profile. My Samsung Syncmaster T240 has the same problem. Photoshop particularly does not like the standard colour profile for my monitor. The quick fix for Windows 7 is to select Colour Management in the Control Panel and add the sRGB IEC61966-2.1 as the default profile for your Samsung monitor. This will cure the problem with the windows photo viewer and issues with Photoshop. I've not noticed any adverse effects from doing this.

Not the answer you're looking for? Browse other questions tagged lightroom photo-editing windows-7 or ask your own question.

30
Why does my Lightroom/Photoshop preview change after loading?
3
Why does opening Lightroom 4 cause a color shift to my entire display?
0
Setting white balance for raw image from Canon S100 using Lighroom failed to work well
6
How to calibrate image darkness (blacks and shadows) between Lightroom and printers?
0
How do I figure out a good workflow with Lightroom CC, Nik Filters, Photoshop CC, and Exporting?
0
Why did LR6 soft proofing thought some colors were out of gamut even if they turned out perfect?
4
Why do my RAW pictures look fine in Lightroom preview but become faded when exported?
1
Opening NEF files on windows initially open fine but then change contrast
0
Lightroom Library Metadata filter does not show result count
3
Image colour inconsistency between browsers, image viewers, and Photoshop