Is the Deflector Plate recommended when using a Westcott Rapid Box with the cover on?

I recently added a Westcott Rapid Box 10"×24" Strip to my setup, and am really happy with how it lives up to the "rapid" name, and when in use takes up a lot less area in my cramped working space. I'm thinking of adding the 26" Octa, and entirely doing away with the umbrellas I have been using.

Just about every review of the Octa Rapid Box notes that the internal deflector plate is a must have (and that it's unfortunate that it's not just included rather than costing an additional $20). But the deflector plate is marketed as turning the Octa into a beauty dish, used directly without the diffusion material. I might want to experiment with that, but if I am using it as a soft light source with the white cover on, will it make a meaningful difference? I'm pretty happy with the evenness of light from the Strip, without a deflector, but perhaps the Octa's different size and shape changes things.

You don't need it, and possibly don't even want it. You do want a Sto-Fen or similar push-on diffuser, though.

I know Stan knows what he's talking about, but I had some downtime this afternoon and my normal models are off watching the new Muppet movie with friends, so I decided to experiment a bit.

Westcott Rapid Box 26" Octa with Cheetah Light V850 (radio trigger hotshoe flash). I dialed the flash power back to ¹⁄₁₂₈th, zoomed it to its widest setting, and selected a relatively narrow aperture and low ISO.

I took three test shots, one with the flash unmodified, one with the wide angle diffuser pulled down, and one with a Sto-Fen push-on diffuser. (See my previous test with the Rapid Box 10"×24" Strip .) Then, I repeated this with the defector plate in place.

As before, the bare flash clearly doesn't produce enough spread. Unlike the previous test with the smaller rectangular box, there is a clear advantage to using the push-on diffuser over the wide-angle panel. The extra internal diffusion is particularly interesting in the last test where the plate ends up with an... umbra and penumbra, I guess.

The plate casts a considerable shadow. It might be useful in some cases, but for most even light, use without the plate but make sure to use a push-on diffuser.

Here's a direct shot without the front diffusion material, in "beauty dish" configuration. (Push-on diffuser in use; it makes this better too.) Kind of an interestingly-distint spider pattern: 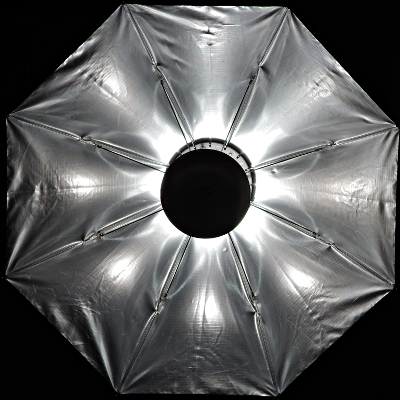 And, that pattern is actually fairly clear in catchlights, which some people might not find a nice as a pure, clean circle. If that's a concern, using the plate with the front diffusion material might be preferred (although then, of course, you're not really getting the harder beauty-dish look). 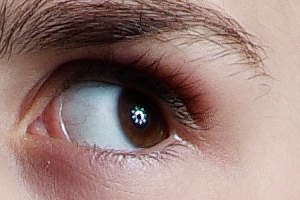 Without it, the box is heavily hot-spotted (even if you use a dome diffuser). The box is simply not deep enough for its surface area to provide anything approaching even dispersion, especially when used with a speedlight.

That does not mean that the RapidBox is useless without the deflector plate, but it does offer a much different sort of light. Much more contrasty, but without actually being hard. I guess the closest familiar comparison would be to use a shoot-through umbrella "choked up" with a Sto-fen (where the flash is considerably brighter in a small area, but there's still a lot of light getting to the subject from the rest of the brolly. Without the spill, of course.

But yeah, if you want "normal" octabox/strip box results, you need the plate. (You probably wouldn't notice too much difference unless you're shooting glossy stuff, though, and that's my usual use case for small striplights.)

Not the answer you're looking for? Browse other questions tagged lighting studio-lighting softbox or ask your own question.

23
How do I set up a home portrait studio area in zero space?
7
Does the wide-angle diffuser on a flash help reduce hotspots when used in a small softbox?
4
Does the internal structure of an umbrella-type softbox impact light quality?

6
Why does the lighting sometimes differ between the two images when taking stereoscopic photos with my 3DS?
4
How to avoid shadows under the eyes when using bounce flash?
5
How to get beautiful even and soft lighting on face?
2
When using a ring light, how do I get rid of the dimmed backround?
10
How to avoid shadows on the background when photographing with flash in darker areas?
4
How to set up lighting when using a fog machine in the background of the model?
2
What is the difference in light from an umbrella with and without a softbox cover?
2
Why is the white balance so different when using daylight bulbs?
0
Concealing brush strokes when using a light box to photograph minatures?