Beam-splitters are used for 3D/stereo photography. Many kits are available for many types of DSLRs.

I want a kind of Inverted-Beam-Splitter, so that I can give the same point-of-view to 2 different cameras. I am experimenting with HDR these days and was thinking this will be a good way to do it.

Is there any thing like this in the market? Has anyone tried this before?

Yes it's been done, someone used a beam splitter to record to two 5DmkIIs in order to produce an HDR video: 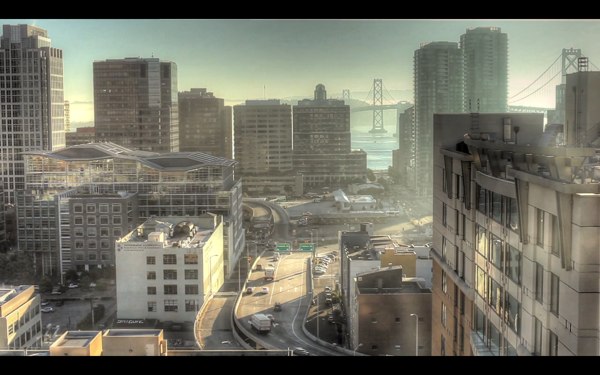 It doesn't quite look how I would expect, maybe because the camera isn't moving around much (due to the size of the rig needed to hold 2 DSLRs in place). Would also be nice to see what this would look like with a more conservative tonemapping approach, possibly in an area more deserving of HDR (like a forest with direct sunlight shining through).

Having alternating pixels with different sensitivities like Fuji's EXR sensor sounds like a better way to do this, as it avoids the problems of registration necessary to align two images (as well the problem of buying, syncing two cameras). I guess things like bloom and lens flare ultimately limit how far you can extend the DR of a single sensor in this way.

Edit: omnivision have announced an HDR video sensor, while it's not DSLR sized they have made some interesting claims (100dB dynamic range, which I make to be 16.6 stops):