How can I photograph a reflective convex cylindrical trophy without reflections?

What I need to do:

What I have available to do it:

What the problem is:

I don't have an entirely empty white room to do it in, and the concave cylindrical form of the trophy seems to emphasize any reflections present, including me, the light stands, the camera and any lights that aren't behind the object.

Here is my best shot: 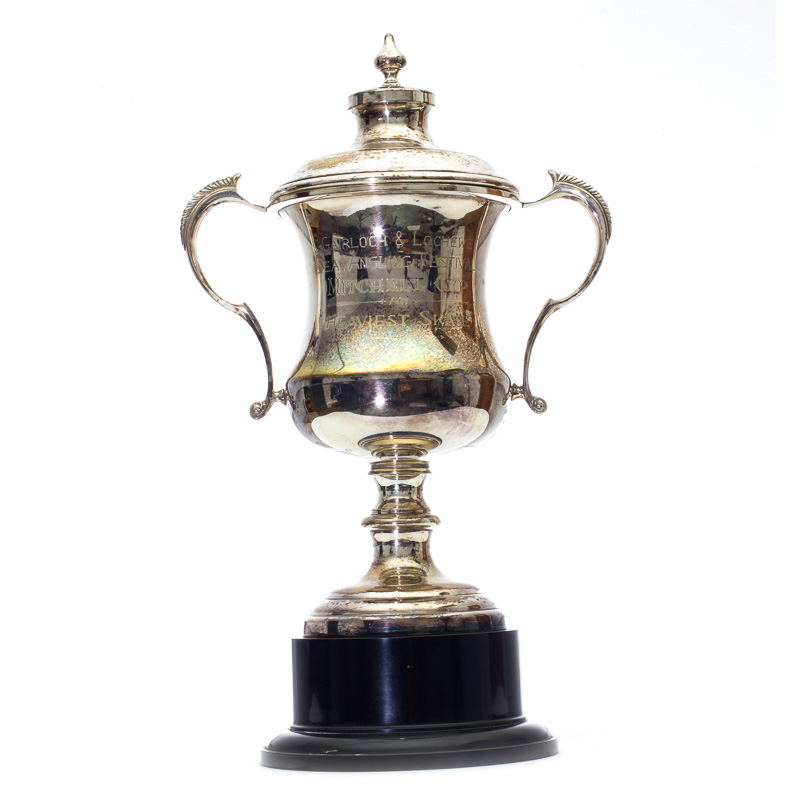 (Yes, it's a little wonky, and the edges look rubbish, but at this point, I realised I couldn't get rid of the reflections without asking for some advice, so I gave up trying anything better for now)

I understand that my reflection would be greatly diminished if I was further away using a longer lens, but the further away I am from the object, the more ground there is between me and it that will be reflected. If I were up close to it, I could put my back against a white wall, the white sheet from the wall to the cup, a white background behind the cup and possibly something white over me and the camera (with lens poking through), but that setup is starting to sound a bit ridiculous.

Is there an obvious setup with the equipment listed above to get the shot I want?

EDIT - should probably mention that this is a museum artefact and cannot be altered, modified or have anything added to it. So any kind of non-reflective coating is not an option.

As promised, here's the final shot: 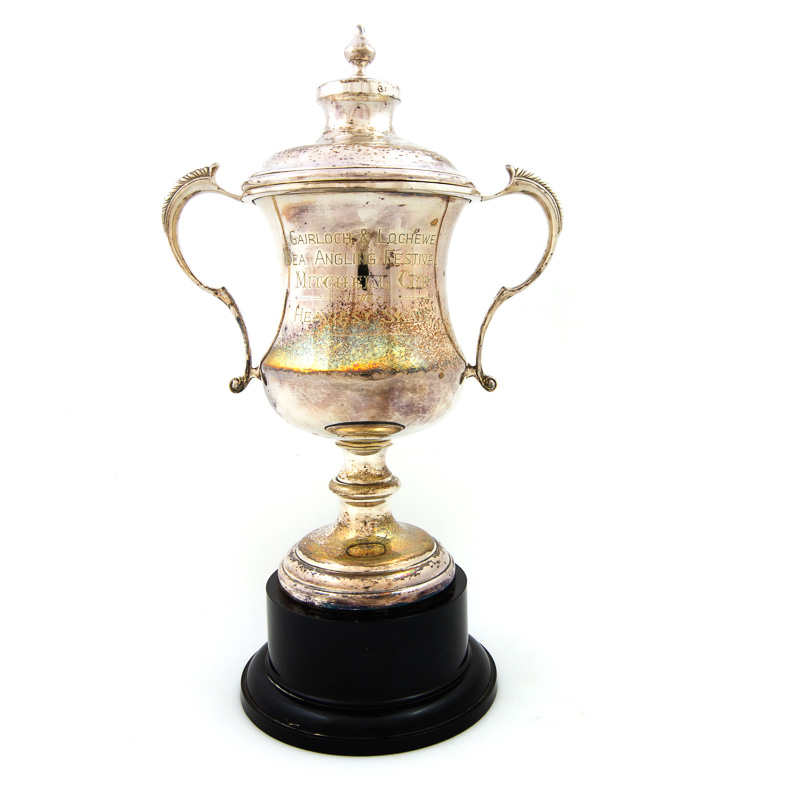 And here's the setup I went for in the end: 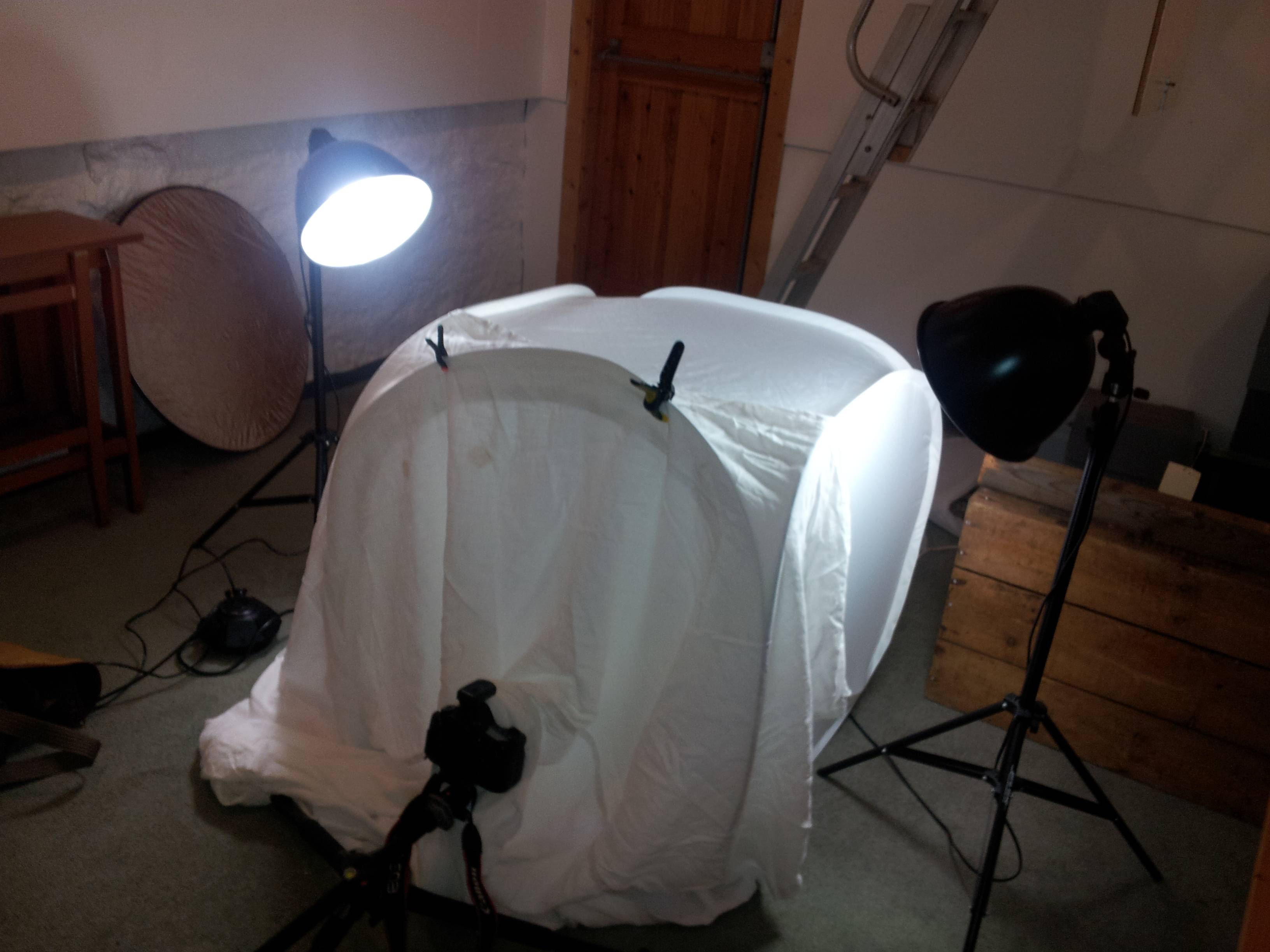 Not shown in this image is a flashgun on full power pointing at the upper half of the back of the light tent. The camera is about as low as it can get on my tripod. The sheet mentioned above was clamped to the opening of the tent and bunched up around the lens. Focal length was 13mm (efl: 20.8mm).

The lens is still visible in the image (that ugly black blob), however, this was shown to the client and they were more than happy with the result. I suppose not wasting a client's time and money striving for perfection - when pretty good will do just fine - is a lesson in itself!

The "correct" answer is the one that matched my setup the closest, as the solution I went for was the easiest and cheapest, given what I had to hand. However, anyone reading this because they want to do something similar should read ALL the answers, as there is great advice to be found in each.

Round metallic subjects inherently reflect all of the surroundings, and the camera will always appear in the reflection. The best you can do is control the environment to make it reflect what you want.

If your studio is large, lighting only the subject, and making sure the camera and surroundings are dark may be sufficient. Black cloth or paper with a hole for the lens can help conceal the camera.

Another possibility is to set up a light tent: completely surround the subject with white material, light it via diffusion through this material, and photograph it though a small hole for the lens. Undesirable seams or reflections should be minimal and easily removed in post. Premade light tents are available in a variety of sizes from photography retailers, or you can make your own.

Finally, using a long lens to try reduce the size of the reflection will work only for reflections in curved subjects; reflections in flat subjects will remain the same size. The camera's own reflection can in general be controlled by keeping it in the dark, or by putting the subject in a light tent with only a small hole for the lens.

Put a white sheet between you and the trophy - some distance from the trophy, but basically "all around". Cut a rectangular hole in it that is about the size of the trophy. Use a long lens, and shoot the trophy through the hole. Now most of what is reflected will be "white sheet", with just a small hole in the middle where you were standing. If you further put a second white sheet where you are standing, and just point your lens through it, you will reduce the reflections to a small dot in the middle of the trophy. The rest can be done with photoshop.

Reason for two sheets is this: you really want 360 degree coverage, but you don't have a "white room". So you make a "small white room", and look through the keyhole (as seen from the trophy) at a slightly larger "sheet". Here is an approximate diagram:

You probably want to make sure you illuminate your "second sheet" to make it appear roughly equally bright as the inside of the first sheet. Play around with the positioning of your flash guns to get the desired effect.

response to icycle regarding "using a long lens far away doesn't work" - the following diagram shows that this is true for a flat mirror (the point on the surface where the reflection of the edge appears is the same regardless of distance), but it is NOT true for a curved object: a lens of the same size will seem smaller relative to the object when it is further away. One way to think about it: you always see "the entire room" in miniature in the reflection in the object (I use a sphere for simplicity). When you are very close, your lens looks like a large part of the room; when you are very far away, it becomes much smaller. 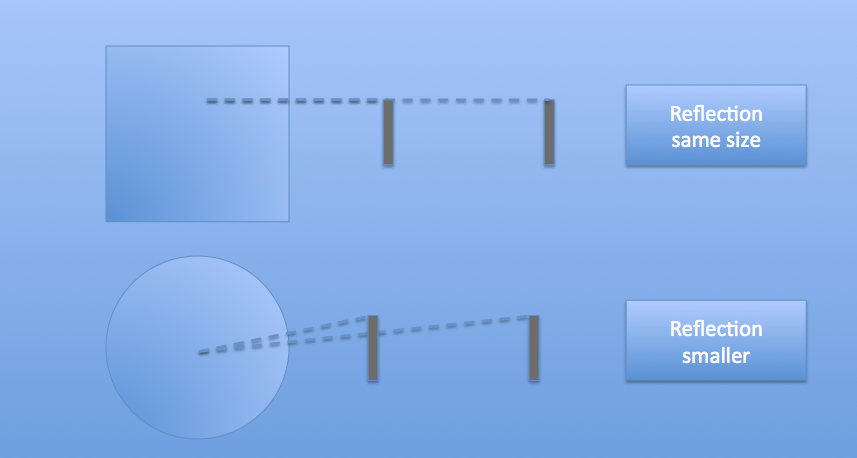 If you need to use a larger lens because you are further away, this is no longer true - in fact if you are trying to shoot with a constant F number lens, since F number is ratio of diameter to focal length, and magnification scales with focal length, then the lens needs to get bigger as it gets further away by just the right amount to keep its reflection constant…

One more thing you can do with the given setup: if you don't need to shoot with lens wide open, consider a piece of card that is white on the front and black on the back, and cut a circular hole in it. Put it right in front of your lens. Depending on the lens construction, you may be able to get a good picture through this hole while the "lens blob" in the reflection will look smaller. Experiment with the f number you use - in principle you will be restricting the lens light gathering capacity which means that you can't trust the f number, and you also have to worry about DOF and how the edge of the circle may become visible in the picture (depending on the view angle of the lens, and the distance from the card to the optical center). You need to paint the inside edge of the hole matte black to prevent haze.

PS - great job on the picture - even with the "larger" lens reflection, it came out pretty clean looking! Happy to know the customer liked it too.

You WILL have reflections - the question is: what would you like to see there? Seriously. Because 1. You will have to put that there or 2. Do that in post-processing. Both is painful, #2 is a bit less money-wasting, but more time-wasting. :-)

You could use a polarizer to remove reflections, if that helps. Makes the object look dull though...

Also, you can learn a lot from car photography. What they usually do: instead of using diffuse lighting (softbox, etc.) they use numerous distant spot lights to emphasize the reflections on the object. This way you can create such a light intensity that ambient becomes very small (or you could turn off lighting completely in the room.) You can use a neutral soft diffuse light to add some color to the object if that helps, from an impossible angle that is not being reflected into the camera.

You could also put the object in some kind of velvet backdrop, to emphasize the form.

EDIT: Also: you can use shallow DOF to blur the reflections! It will not affect the trophy itself!

I'd probably use black rather than white backgrounds (absorb light rather than reflect it back towards the reflective surface), but otherwise basically what you said. Surround it on the sides with black, I'd try bouncing the light from above or from holes in the sides and I'd hide the camera behind a black sheet that only has the lens going through it to minimize the visibility.

If the black ends up being too dark, use neutral greys to balance it. The key is that it be a consistent color that will give you the desired look when reflected. It's impossible to prevent reflections, you can just make sure that the reflections are consistent and appear the way you want them to.

Your light tent seems to have only 5 walls, I'd simply advise you to buy a new one. A 3'x3'x3' with a proper zipped door and an small opening to let just the lens go inside costs under 30 € (USD 40).

I think SE.com forbids the links to shopping sites otherwise I would put it here. http://www.pearl.fr/photo/accessoires/studios-photo/tente-studio-photo--grand-modele_PE3413.html

As an alternative, if you are in a rush, consider turning the opening of your current tent towards the floor, set your reflector as 'ground' and cut a small hole in one of the walls to let your camera peek inside the tent.

Not the answer you're looking for? Browse other questions tagged studio-lighting product-photography reflection metal or ask your own question.

16
How to shoot a reflection in a ball bearing without appearing in it?
8
Lighting on highly reflective surfaces - chromed Dobro guitar
4
What should I consider when getting a camera for product photography?
5
How can I photograph reflective surfaces without the camera being visible?
1
What is a "deported" flash?

2
How to create candle reflections?
8
How to photograph glass without reflections and shadows?
5
Small Studio/Objects Containing White : Getting A Pure White Background
8
How can I get consistent backgrounds when shooting white objects on white background?
4
Product Photography: White object on white background producing white halo
4
How can I avoid light bleed in a studio shot?
8
Avoiding reflections when taking close-ups of a wrist-watches dial
5
How can I photograph reflective surfaces without the camera being visible?
5
Shadowless Product Photography with illuminated bottom?