What are the distinquishing features of 50mm prime lenses for Sony?

Are there other manufacturers besides Sony which develop 50mm lenses for Sony cameras too, and how do they differ?

The best 50mm lens is the best one you can afford and are willing to buy.
You knew that :-).

Your budget affects the answer substantially.
The Sony A58 SLT is an excellent camera but is several steps down from the top of the Sony SLT APSC range). That plus your statement re having a kit lens suggests a low to moderate budget.

You can notionally obtain 50mm lenses that are not from Sony that would be able to be made to work with the Sony A-mount lens mounting, but they would be liable to be high spec and high cost compared to Sony versions.

An excellent start is the Sony 50mm, f/1.8. While this is about the lowest spec new 50mm A-mount lens that you can buy, the difference between that and the much more costly f/1.8 and f/1.4 is far less than the price difference might lead you to expect.

Most major SLR makers produce a 50mm prime low cost lens as a 'gateway drug' to high performance high cost lenses. Sony is no exception. The Sony 50mm f/1.8 prime can be bought new for well under $200 and is superb value for money. I've seen it estimated that to get a zoom lens of equivalent quality to the entry level primes from major manufacturers you'd need to spend around $1800 or more.

By all means look at reviews and sample photos for the Sony A mount 50mm f/1.7 and f/1.4, but it's unlikely that for you the difference would be justified.

The table below shows user opinions of a number of 50mm A mount lenses - the 3 current Sony ones (one of which is from a Sony / Carl Zeiss cooperation), plus 4 old long discontinued Minolta ones - which will also fit your camera. (I've ignored the 'specialised' lens baby offering).
These review summaries are from the Dyxum lens pages. While the two f/1.4 lenses are usefully better than the f/1.7 (as would be expected) - ALL the old Minolta lenses also score higher. This is not to say that the f/1.7 is bad - it's not - it's just that the old lenses are also very good. The 4.37 score fro 81 users indicates a very capable lens - but a good condition used Minolta lens may suit you just as well, and for even less than the new lenses bargain basement price. The Minolta lenses have the advantage of being full-frame, so when you upgrade to an A99-MkIV they can still be used. 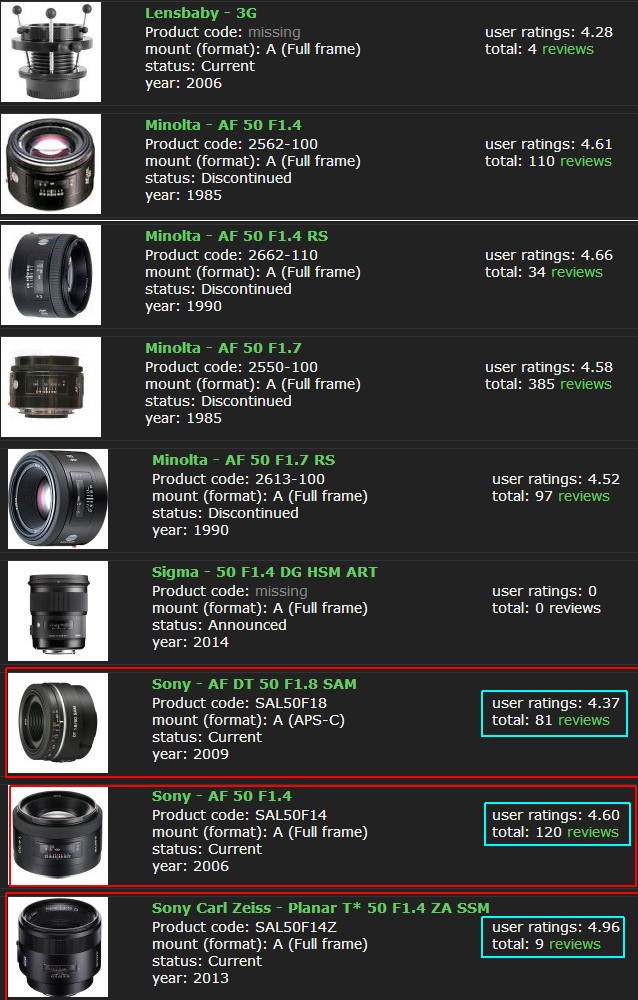 Not the answer you're looking for? Browse other questions tagged lens equipment-recommendation sony prime 50mm or ask your own question.

38
Why do people recommend 50mm or other prime lenses as starting lenses for learning photography?
2
How can I learn about the differences between types of lenses, so I can choose the best lens for my purpose?
11
Are there any Canon EF-S prime lenses or tele-zooms?
10
Why are 50mm no longer the default kit lens for prosumer SLRs?
6
How do I compose photos with prime lenses?
7
What are STF lenses?
4
Do old manual focus prime lenses give better image quality than new kit lenses?
1
What's the difference between these two 1.4f 50mm prime lenses?