Which terms accurately describe the lens mount on a Canon 7?

I've gotten a used Canon Model 7 rangefinder camera from my grandfather. I'm given to understand that it's a reasonably cool old camera, and the 50mm/1.4 lens isn't too shabby either.

I am considering whether to also get a 35mm lens for this camera, and I'm having a little trouble understanding all the terminology. If I'm correct, the following keywords describe lenses which are compatible with this camera:

The following I'm not sure about:

Is a M39-mount lens actually compatible or no? Am I right about the other terms? Am I correct in surmising that basically the only place to find any compatible lens is eBay? :) 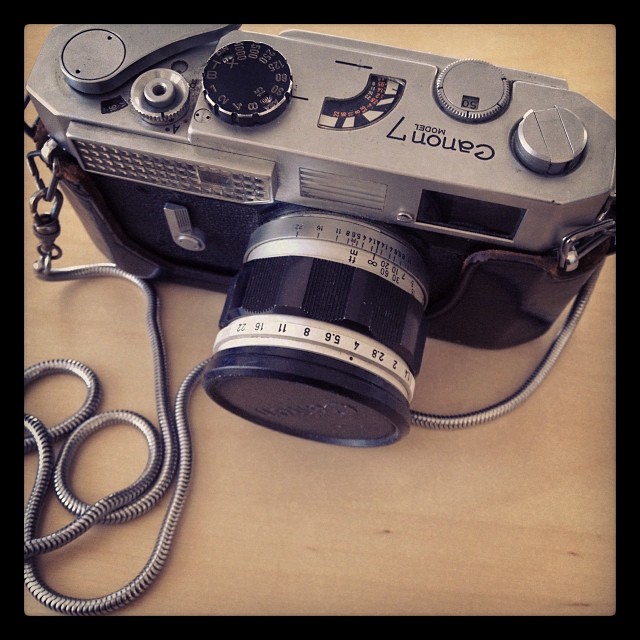 "M39" describes Leica's screw mount, and most M39 lenses on the used market are Leica M39 compatible. Most. And therein lies the problem.

"M39" only tells you that it's the standard diameter for a metric 39mm screw. That's about as useful as knowing that a bolt is a 1/4" bolt. You also need to know the thread pitch and profile.

A lens that is only specced as "M39" may be a 39mm/26tpi Whitworth Leica-mount lens. Or it may be a 24tpi early Canon lens (which won't fit your Canon 7). Or it may be a 39mm x 1 DIN thread screw (mostly Eastern European lenses), which also won't fit the Canon 7 (or a Leica). Or, rather, they'll fit if you force them a bit, since they're almost 26tpi (25.4 tpi), which may then keep your other lenses from fitting properly unless you force them a bit too. (Rinse and repeat until there are no threads left on the camera body.)

And it doesn't help that most of the later Soviet lenses were Leica mount (to fit the Zenit rangefinder) and that Canon and FED, who were the main non-Leica oddballs in the beginning, went on to become the major Leica-compatible screw mount rangefinder lensmakers. A little research can save a lot of trouble.

And no, eBay isn't your only source. There are still very good used equipment retailers out there, like KEH, that can limit the risks involved in purchasing (especially) the more desirable Cosina Voigtlanders and so on that you might want to consider using on a Micro Four Thirds camera as well as on your rangefinder. And while the prices may not get quite as low as a "really bad for the seller" eBay auction, they're usually better than what you'd get on a "quite good for the seller" auction.

0
Which mount adaptor do I need to mount an old Tokina FL/FD lens on a Canon 30D?
26
Are there drawbacks when using Panasonic lenses on Olympus Micro Four Thirds cameras?
1
What lens and mount is this Sigma lens for Canon?
2
Can I use a Nikon S Mount adapter for a Contax RF Mount lens?
1
Which mount is this Sigma lens for?
6
What is the Canon PE Mount?
1
Which kinds of lenses can be mounted on or adapted to the Leica M-Mount?
1
What is the mount on this Beston lens?
3
Raw therapee lens/geometry correction Sony a6100
1
Adapt Praktica MTL 5B lenses to Lumix G80 camera