How does lens-hoods for pancake lenses work? (Canon EF 40mm with ES-52)

Normally I use lens-hoods on every of my glasses (flairlight blocker, lens protection). Some days ago a bought the Canon EF 40mm STM (Pancake-Lens). So I look for the fitting lens-hood and found the tiny ES-52.

Honestly I can't imagine that this tiny piece mounted on the lens can really block sun or protect the lens very well. Maybe in very very extreme situations with light coming from a nearly 90 degrees angle, but this can't be all.

I don't want start an opinion based discussion - I'm searching for facts. Do I miss here something or is the lens-hood “useless” (yes I know this sentence is a little bit overpraise, but I think you know what I mean).

The ES-52 works a little differently than most lens hoods we are accustomed to seeing. Instead of blocking off-axis light by extending a cylinder or cone perpendicular to the image plane and centered around the optical axis, The ES-52 blocks extraneous light by placing a smaller circular opening parallel to the image plane. Due to the difference in design, perhaps it doesn't offer as much hazard protection as a conventional design would. This is balanced by the fact it preserves the compact size of the EF 40mm f/2.8 STM which is one of the drawing points of this lens.

As with all lens hoods designed for EF lenses, the OEM hood is designed for the angle of view needed for use on a camera with a full frame sensor. If you are using an APS-C camera, the hole on the middle of the hood could be even smaller since the angle of view needed is narrower. This would be the same as aftermarket conventional hoods for other lenses that extend further out for use on APS-C cameras. 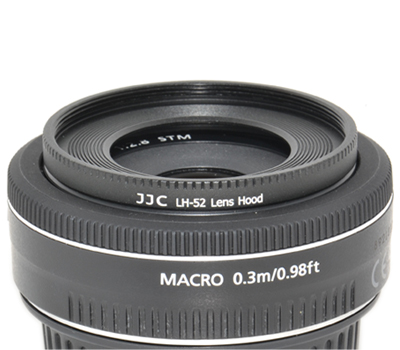 I have seen a few reports that the ES-62 hood (including thread adapter) designed for the EF 50mm f/1.8 II will also fit the threads in the 40mm pancake lens, but you then lose the compactness of the 'pancake.' Since the EF 40mm f/2.8 STM provides a narrower FoV on an APS-C camera than the EF 50mm f/1.8 II does on a full frame camera and the front element of the 50mm lens is recessed from the hood mounting point and wider than the front element of the 40mm lens there should be no issues with vignetting if you choose this option. Without comparing them side-by-side, though, it would be hard to say which one provides the narrower and wider angle of protection from off-axis light when mounted on the EF 40mm f/2.8 STM. 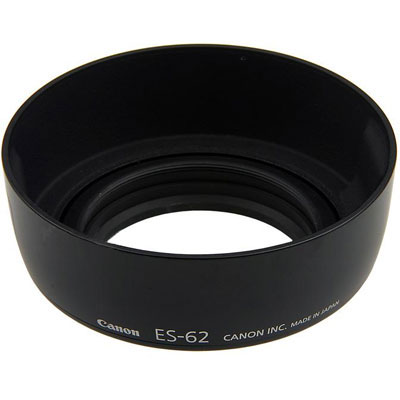 Here's a very crude conceptual drawing that illustrates how each type design blocks extraneous light. Please note that this is not to scale for either of the actual hoods. Light from point sources outside the yellow lines of each cone but inside the orange ones would fall on part, but not all, of the front element. Light from outside the cone formed by the orange lines would not fall on any part of the front element. 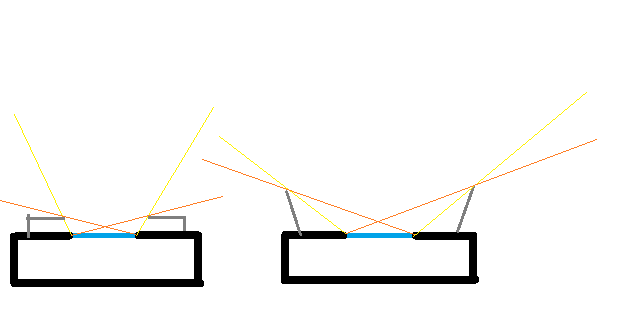 I remember a lengthy discussion about lens hoods on a forum where many pro photographers frequent. Michael gives you a good summary of all intended advantages of the lens hood. Meanwhile, the participants of the discussion described themselves using the lens hoods (of the large variety) on every lens that wouldn't get adversely affected by it restricting the field of view (pretty much everything but fisheyes). Reason?

When your camera falls lens-down without lens hood, the lens (which costs a fortune) gets damaged beyond repair.

When your camera falls with the lens hood on, the cheap lens hood gets shattered but the lens usually survives.

Other than that, it doesn't impair picture quality in conditions when it's not necessary. And cameras with them on look rather stylish.

In essence, the "stray light blocking" effect is considered completely secondary. They are commonly used as physical shock protectors to save lenses from fall damage though. There were quite a few stories where $10 lens hood saved a $1000 lens.

Not the answer you're looking for? Browse other questions tagged lens canon equipment-protection light lens-hood or ask your own question.

7
Are there any good pancake lenses for Canon EOS DSLRs?
14
Would the 40mm pancake or 50mm prime be better for street photography with a Canon APS-C camera?
0
Would a 24mm/40mm pancake or 50mm prime be better for landscape photography with a Canon APS-C camera?
1
Why are lens hoods rectangular for professional videocameras, and why not for DSLRs?
1
compatibility of lens hoods and lens filters with step up ring
0
How important are lens hoods on ultra wide zoom lenses?
1
Does EOS utility fully work with other (non canon) lenses?
8
Are there any lens hoods with zoom-moveable petals?
1
Are Canon EW-83J and EW-83H lens hoods mount mechanisms compatible?
1
Canon EF-S 24mm f/2.8 STM 'Pancake' lens hood and UV filter