How to film translucence and light?

That said, here's my current obsession: capturing items that have some depth and translucence to them. There is this glass ball hanging in my back yard, and when the light hits it, it's spectacular. I'm having a very tough time capturing that light. My images either come out looking too flat with little depth, or too dark with too much contrast. And none of them really capture the range of colors in the sunlight hitting the glass; yesterday I saw yellows and blues in the white highlights. Couldn't figure out how to get them with my camera.

How do you film translucence and glass? How do you capture both the depth of the glass and the spectrum of light hitting it? Are there processing tweaks that help?

Attempting to attach photos so you can get an idea of what I'm talking about ... (this is my first time doing this here, so please bear with me).

The first is bright but flat; the second is too dark but begins to show depth, although it doesn't capture the brilliance of the light striking the ball. 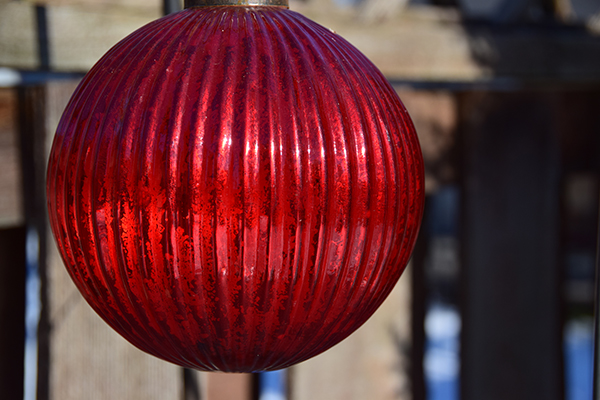 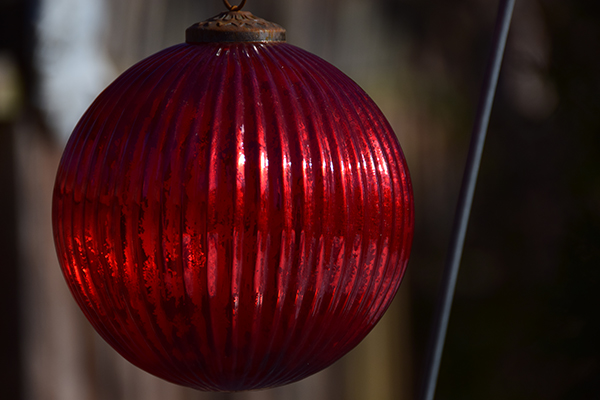 you have too much dynamic range. First of all shoot raw so you shoot the full dynamic range and can balance the different components to achive your desired depth and light play. Secondly, your highlights will be difficult not to clip. you could try a polariser, and turn it to dampen them a bit, just dont close them off completely, or shoot from a tripod with multiple exposures and blend them in from a darker exposure. I'm deliberately not recommending "HDR", as that most often lead to crazy looks, when people get started with it.

The problem here is the lighting and contrast. The first difficulty in capturing spheres in a realistic way is conveying that they are spheres instead of just flat circles. With light placed to the side and forward a bit towards the ball you'll see a light and dark side to the sphere, for example, and this kind of difference will make it feel more like a sphere. Additionally, in your photos you can see that the contrast is high -- some parts are dark while others are blown-out to pure white -- and this large difference is too much for the dynamic range of your camera to capture.

Applying these ideas: a softbox or umbrella and flash would help a lot. You can position the light to make the ball look good, and the added light will brighten the whole ball, reducing contrast.

Now, that will help you capture the sphere but I suspect it won't quite let you capture the translucence very well and it may not show off the colors you see. Honestly, off the top of my head I'm not sure how to approach that. But! The book Light: Science and Magic is exactly the resource you want. I'm not sure where my copy is right now, but I'm sure it has exactly the information about how to capture such detail (and lots of other interesting stuff, too)!

This is not evident in either of your posted images. The object looks opaque due to the dominant lighting you have added from the camera-right side of the shot according to the highlights on the textured object.

When I shoot a glass of beer, I want it to look translucent not transparent as it does sitting on the bar in front of you. To get the visual effect, I put a white card behind the glass of beer trimmed carefully to not appear in the image. Then, I carefully light the card independent of the beer. The effect is a light translucent cool glass of beer. The light travels through the beer. If I take away the card, the background shows through the transparent liquid. It loses its appeal.

Light, itself, is not visible and cannot be photographed.

You are photographing a lighted object not the light falling on the object. So you have to make the subject appear as though it's translucent.

Light is electromagnetic energy. It is not a solid, liquid, plasma, or gas. As such it isn't observable, per se. I can see something illuminated by light but I don't see the flow of it toward the object and back in the same sense as I would as with a stream of water from a fire hose, say.

While this is a very FINE point, it is the essence of photography. You must look at the object and how light affects its appearance. Think about how the effect you wish to capture must appear to the viewer in order to portray the effect you wish to communicate. I was taught that this is the process of visualization (an analysis of the subject).

With all my respects to some other answers. It has NOTHING to do with dynamic range or RAW. Stan nailed it.

You see your lamp translucent because you interact with it, you see it on the morning, and see it diferently on the evening or during the night.

(Here is a similar situation, where you know there are sparkles because you interact with the real subject How to photograph frost and snow sparkling?)

But on this shoots, where the light looks comming from the front on the first shoot (probably the camera flash) and on the side on the second one (off camera flash) the light is bouncing.

It looks like a lamp. Do you have a light inside it? Can you put an off camera flash behind it, probably with a snoot? You then need to balance the ambient light with the artificial light.

26
How to photograph frost and snow sparkling?

9
How do you avoid a dim portrait with a bright background and no external flash?
8
How can I improve shots in the dark, when tripod or flash are not available?
8
Is there a fundamental difference between emitted light and reflected light?
1
How do I know how much light will be needed for a given film speed, shutter speed, and aperture?
7
What is "north light", and how can I use it in my photographs?
9
How to recreate Liam Wong's images of city streets at night with neon lights?
3
Why are specular highlights sharp when focusing on close object?
0
My light measurement sensor is returning random (bad) values in my Pentax K-50
1
How to get the most out of low-level monochromatic light?