I recently came back from a visit to Tikal, a mayan ruin filled with majestically tall structures and vertigo inducing panoramic views when looking down from on top.

Unfortunately, my (and other's) photos of the site don't seem to it justice - they look "flat" almost as if the site were a small toy replica. I noticed this is a problem with other impressive landscapes as well.

So here are my questions:

There are some things that two dimensional photos have trouble doing. One of them is portraying a place we experience in three dimensions and translating that place into two dimensions without something being lost along the way. OMNIMAX/IMAX Dome theaters try to deal with it by curving the screen around the viewer so that the visual experience includes the entire field of vision of the viewer (when looking straight ahead) and then add immersive surround sound to the equation. Another method used for still images is the Gigapan approach. By making a large panoramic image that the viewer can zoom into and see particular elements of the image at high resolution and then pan around it gives a better sense of 'being there'.

As far as more traditional photos of such vistas are concerned, there are a couple of things you can try.

Is there an optical explanation behind this perceived "flatness" in the images?

It is not so much optical as it is psychological. We don't really "see" with just our eyes. We really see with our brains. Our brain assembles all of the bits and pieces of a scene that our eyes send to it and combines it with other physical sensations we experience simultaneously. A photo that can induce vertigo is rare, and usually involves some kind of trickery that fools our brain, rather than our eyes. This one from Eric James illustrates the concept. 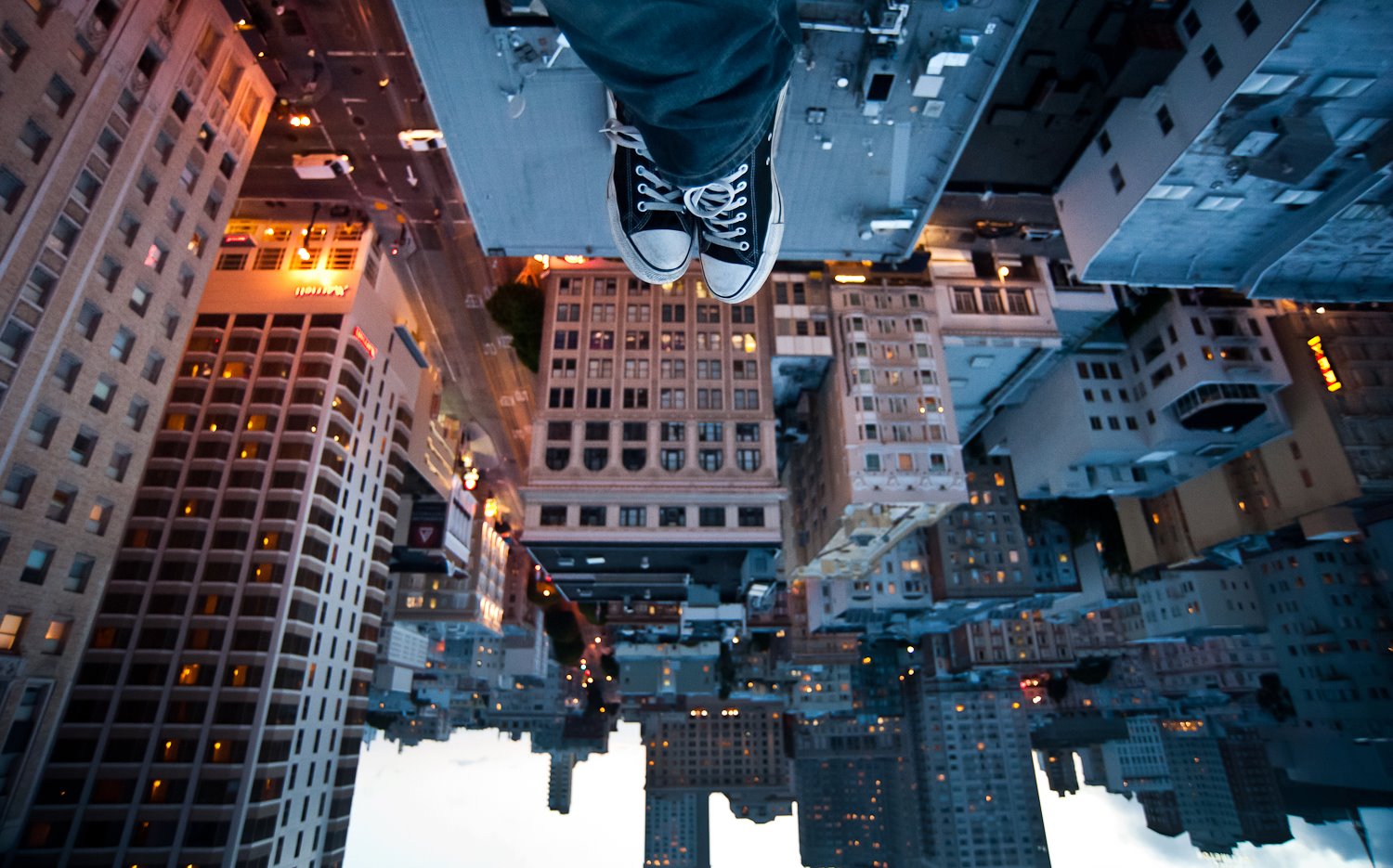 Rotate the photo 180° and you get nowhere near the same effect.

Are there any best practices for shooting "deeper" landscapes?

Try to include some nearer objects as well as the distant vista in the scene. In the example image above, getting the shoes in focus meant sacrificing some sharpness in the cityscape beyond. Don't become so concerned that everything is perfectly focused with infinite depth of field if your primary concern is creating an effect that provokes a particular emotion, rather than documenting everything in the scene. The general rules of composition also apply. For example, you can use converging lines to draw the eyes of the viewer to the peak of one of the pyramids. You could also use the rule of thirds to place that peak at one of the intersections of the imaginary grid lines that divide the frame into thirds both horizontally and vertically. Then use color contrast if possible, etc.

Are there specific lens better suited for this task (say fisheye), and can their effect be simulated in post-processing?

This may be a question of artistic preference, but I personally am drawn more to wide angle landscape images that are corrected to a rectilinear projection, rather than a fisheye projection. There are software tools that can do either: correct mild barrel or fisheye distortion to rectilinear projection or take a rectilinear view and make it look like it was taken with a fisheye lens. In both cases some of the original frame will be cropped off if the final image remains rectangular. Sometimes a lot of the original image will be cropped in the correction.

Depth of obvious to us in the 3D world but when things get translated into 2D via photography, we lose depth-perception and the brain must therefore interpret signs in the images in order to see its depth.

Using a projection to form a panorama with a wider field-of-view actually removed perspective and flattens the scene. Incidentally, I happen to have taken a 360° of Tikal in completely flat light and you can see that it looks like a painting rather than real 3-dimensional location. The light was better the day before for the 180° view but because the field-of-view is so wide, perspective is flattened out. Had I wanted to get emphasize perspective, I would have taken a photo of the pyramid or path close up and uses a focal-length around 16mm (APS-C) or 24mm (full-frame).

Not the answer you're looking for? Browse other questions tagged landscape field-of-view perception or ask your own question.