When scanning a printed photo, the resulting file is of less quality or resolution than the original?

In other words, can a photograph (or any other printed image) be scanned and the output yield a file that can be used to print a copy with the same resolution/sharpness as the scanned material?

A reason for that is quite simple to understand. Printer splits an ink in dots pattern where some of the dots are larger, some are smaller, and some overlap. See the macro image of printed page: 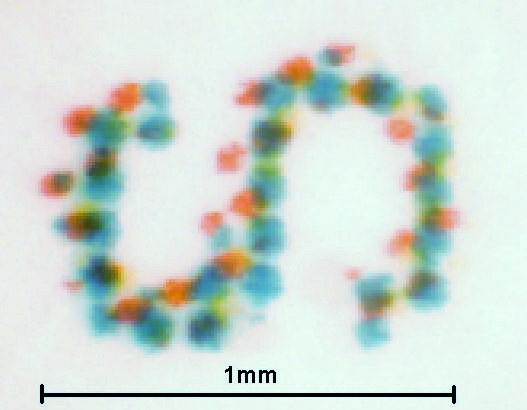 Meanwhile computer images work on a basis of pixels - where each "dot" is square (not round), equal in size and doesn't overlap any other, nor there are any spaces between them. So if you scan such a printed image - there's inevitable loss of details due to the way image is printed out.

Therefore you always will have a loss of image sharpness, resolution, as well as quality of colors (reasons for that are much more complicated than just raster printers use - quality of an ink, paper, used processing, number of inks, coatings, and other things make a huge difference to how the colors look like on an image, not to mention further difficulties with scanning).

Yes, as perfectly described in sampling theory, in the Nyquist rule.

If you know the grain size of the photograph, or the point size of the the printout, you have to use at least a double resolution using scanning. Meaning: a grain or dot on the photograph has to be at least perfectly covered by two scanlines and two scanner sensor pixels, or whatever it is called.

You also have to make sure that there is no internal image processing, so you end up with a raw image interpretation.

The photo grain is not a perfect square. So that should be considered.

Also, the scanner's lens or edge will already alter the image a bit (it is not sampling a perfect square, but something similar). This works as a low-pass filter, and also can work as some kind of a convolution filter.

The printer you want to use to reproduce your image will also emit dots, instead of emitting perfect squares. This is also a kind of 2-dimensional filter.

Also, scanner mechanical elements do a bit of jitter in sampling, but that can be eliminated, too, with a bit of postprocessing, if needed.

However, if you go well beyond the Nyquist frequency, these will have very limited effect.

Get the smallest grain size on your photo, divide by 2 => that is Nyquist. Divide that by 8-10 to oversample. And that will be the needed scanning and printing resolution.

It depends on the relative quality of a lot of things. If the quality of the printer and scanner far exceed the quality of the original source, then it is quite possible there will be minimal loss as both the printing and scanning would effectively create multiple similar points for every point of the original image. This would allow for random error to be strongly reduced by downscaling the image and combining the multiple samples back together. That said, this would still only get a very close approximation of the original. There is always some amount of generational loss in any analog transfer. You can reduce the impact by using much higher qualities than otherwise necessary, but some small degree of loss still occurs.

In other cases however, if the print quality is close to the quality of the original photo, then a large amount of information is lost because of the difference in how the pixels are rendered. In a print, small dots of ink or pigment are applied to the paper in a pattern that dithers to produce the actual colors we see as the image. They are microscopically small, but if the print resolution and image resolution are close, there won't be a good way to reliably reverse the dithering to get the original pixel colors and thus a much higher resolution scan that captures all the points being dithered is necessary, but the image is then significantly different. You can also similarly downscale again after the capture, but it will result in a lot of information being taken from originally neighboring pixels based on the spread of the dots. To the human eye, it would probably still be rather close, but it wouldn't be nearly the same as the original if you did a digital comparison.

No, each transfert from one media to another one is working with tolerance due to captor/probe/output device. so at least you could have the same in perfect world but you only have partial in real world. Transfert is loosing part of the information with the physical limitation of each device not like a digital copy of a file on computer that copy each simple info exactly the same on the new support (in reality there is also tolerance but there is a auto correction info that could be assimilate to exact copy)

I will try to explain using an example from earlier days when music was still recorded using analog technology.

Maybe you remember the times when music was recorded using tapes. Even with high-quality equipment it was impossible to avoid quality loss. Maybe making a good enough copy was entirely possible, but lossless, no.

The exact same applies to scanning a printed photo today. Repeating the scanning and printing process will always reduce quality.

As a side note, I always have big difficulties in getting dust out of my scans of photo prints, so I leave that to professional services.

Not the answer you're looking for? Browse other questions tagged scanning or ask your own question.

10
how to properly clean inside a scanner
10
Why do my scanned images have lines across them?
4
How much post processing advantage is gained when scanning 35mm negatives as TIFF rather than JPG?
2
How to restore as much detail as possible to a scanned image of an inkjet-printed page?
1
What caused this pattern of lines (moire?) in this picture I scanned from a book?
1
Is there software to automatically choose the optimal resolution for scanning?
2
Do negatives degrade resolution over time?
5
How can I restore this scratched 1930s print?
6
What's the point of scanning family photos at a higher resolution for later enlargement other than restoration?