What is the reference plane used when the minimum focus distance is measured?

Once you know the MFD (minimum focus distance) for a particular lens, is that the distance from the subject to the front of the lens or to the camera sensor?

The Minimum Focus Distance is measured from the image plane that is occupied by either the film or sensor. In fact, all focus distances are measured from this point. Although not defined as such in the academic field of optics, in the field of photography this plane is also referred to as the focal plane.

Many cameras, including most film SLRs and DSLRs, have an external marking that indicates where that plane is using a symbol that resembles the Greek letter Φ. The distance from the front of the lens to the subject is usually referred to as the working distance. When doing Macro work, it is not uncommon for the MFD to be only slightly longer than the physical length of the lens plus the camera's registration distance (the distance from the image plane to the lens flange), leaving very little space between the front of the lens and the plane of focus. 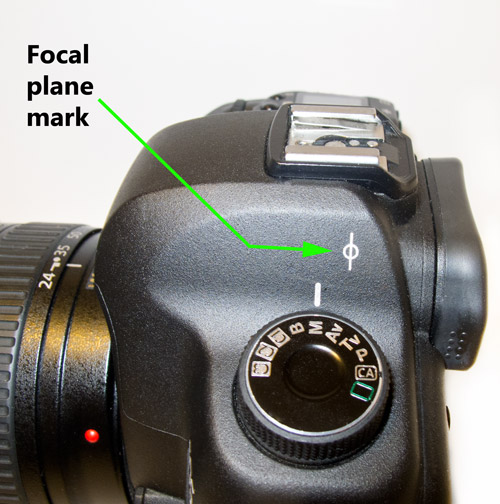 The MFD is the minimum distance you can focus a subject and it is measured from the focal plane mark on the camera body, not from the front of the lens.

9
How can I find the sensor position on my camera?
27
What is the shape of the focal plane?
13
How does Nikon measure “minimum focus distance” for Macro/Micro lenses?
2
Why can't my dSLR take close-up photos?
1
Why can't my DSLR with kit lens focus on objects close to the lens?
-1
Why is the autofocus not working on my Canon EF 70-200mm f/2.8 L IS II USM?
0
The best setting for Canon 70D for my application
0
Measure in photo formula help
0
Where is the image sensor located in a camera with a fixed-focus lens?

17
How does changing focal length affect depth of field?
9
When a camera auto-focuses, is the current focus distance reported from the lens to the camera?
3
Why is my subject still out of focus when it's inside the range shown by a depth of field calculator?
1
How to accurately determine the size of a nearby object (~15cm) using the autofocus focus distance?
3
Would adding an external lens allow one area outside the focal plane to be in focus?
4
Can hyperfocal distance be used to keep everyone in focus in group photography?
1
Is minimum focus distance (MFD) really minimum?
1
Would a screw in 2x converter double the minimum focusing distance?