How do I manage good photos of babies and kids?

Apart from the strain they create by not sitting in one place while in photo shoot, kids do make nice subjects for pictures.

I have been trying various scenes, props, etc., to get the best out of my one-year-old son and ten-year-old daughter. Can I have something like Dos and Don'ts for kids pictures? Are good pics taken outside the home or indoors? Should I wait for enough daylight or should I use artificial lighting. I have 14 megapixel digital camera. Is this camera enough for the shoot or should I try some another camera?

You've got plenty of megapixels... don't worry about that. Here are some other tips for photos of children:

Have fun taking photos of your kids... experiment and find what creates effects that you like.

When photographing kids, megapixels don't matter. What matters more is the ability to focus and take the picture before the child escapes from the picture. Generally DSLRs are better in this regard, but recent compact cameras might work well enough for you.

If you're shooting indoors an external flash might help to freeze the movement and improve lighting conditions.

Regarding dos and don'ts: what comes to my mind is that it's better to shoot kids from their own eye level.

Wise sage says, "To photograph a child you must be as a child."

In other words you have to be able to communicate with them, at their level on their level. Have fun!

Beyond that your job is to direct the child in a way that doesn't feel like direction. Compose by moving around your scene in a way that feels like a game. Have your settings dialed in before you start. You'll need all your attention on your subject, there is no time to fiddle.

Play with them. Get on your knees, or your butt, or your tummy. Roll around with them. Let them engage you, show you things. This is easier outside of a studio setting, but can still be done.

Beyond this, some of your best images will happen once they loose interest. Let them do their thing. Follow them. Be as curious as they are. Suddenly their world will unfold to you and you will have magic. 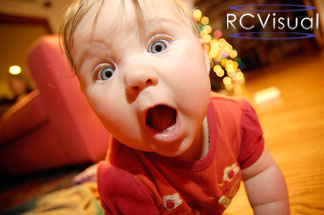 Here is what you need for shooting kids:

1) Speed! Kids move quickly, their expressions are mercurial. A fast lens with a fast camera is a must. So, an SLR, but instead of a kit lens (which is not a 'fast' lens), you'll need something like the 50mm f/1.8, a prime that's ~$100 on the major systems. That lens is fast, meaning that it will find focus quickly and require less open shutter time (ie, take a picture faster), than a kit lens. I'd stop down to about f/2.5 or 2.8 in order to make sure to get the plane of focus wide enough to get everything.

2) Light! A flash, either an external or on the camera itself, will be something of a help, but the problem is two fold: the fastest shutter speed is generally 1/250th of a second (1/500th for an older Nikon D70), which may be about the speed you want to be shooting, or you may want to go even faster. The other problem is that flash can be harsh, and the resulting photos can have a look that you don't want. So, it's better to be outside or to have lots of light inside to shoot kids, and use a flash as a backup.

3) Distractions. You need to get the kid to look at you, so keys, shiny things, etc help for younger kids, or saying naughty words for older kids (whooo! You said something you shouldn't have!). When I was growing up, my dad used to say, "say shiiiii..." and we'd all have fits of laughter about that.

4) Be patient, but be fast. I find myself waiting for the shot as the kids are playing, waiting for that fleeting expression that I want to get. Once it's there, the camera has to be ready to go, no shutter lag or the like. That could be five minutes of waiting followed by a bunch of shots in a row.

Also, @ahockley's composition suggestions are good. Don't shoot from your head height, shoot from theirs (or, to really mess with perspective, shoot from the ground up, to give them the Godzilla look. Toddlers in particular like to think that they are huge, apparently).

Mind you, this is what works for me.

Your mileage may vary, but I find that indoor kid photos with flash almost never turn out well. The foreground frequently gets blown way out, rendering the background extremely dark. A slow synchro can help, but if they move, you'll get some blurring.

A good, fast lens is going to do far more for you than a built-in flash will. As long as there's enough ambient light, you should get decent results. As others have suggested, continuous shooting mode is also great — one of them is bound to turn out. I get good results with the Canon EF 50mm f/1.8 on my Rebel XSi.

The other suggestion is to engage the kids! If they're cooperative, you can get some good posed shots. I managed this ten-second exposure of my four-year-old a few days ago: 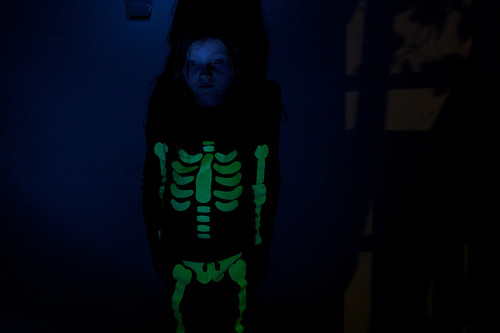 She was really cooperative and excited to help daddy out. You're not always going to get them in this mood, but it's worth trying.

Not the answer you're looking for? Browse other questions tagged lighting technique portrait children baby-photos or ask your own question.

25
Prime lens or flash: which upgrade will most improve baby photos?
10
I have a new dSLR and am terrified — any advice for a totally new photographer?
5
How can I get young children to cooperate with having their pictures taken?
8
What's a decent lighting kit for getting started with portraits?
5
Why am I getting a slow shutter speed with Child mode on Nikon D3100?
2
What lens for my Nikon D3100 will provide great bokeh and keep up with fast-moving kids?
1
Taking/Editing personal photos

25
Prime lens or flash: which upgrade will most improve baby photos?
5
How do I choose between an SLR or an expensive P&S?
11
How can I get good pictures of a fast-moving child without high FPS?
55
Is camera flash actually harmful to infants or newborns?
7
What is the best camera to buy for a child to help them learn about photography?
5
How can I get young children to cooperate with having their pictures taken?
2
How can I take natural looking photos of my kids, etc. with a compact camera indoors?
0
What's the best lens for shooting baby and kids with a DX Nikon?
3
How to handle publicly sharing family photos (especially kids) online?
0
What lens and flash should I get to take pictures of kids?