What's the formula for f-stop equivalence between different sensor sizes?

The famous Group f/64, to which Ansel Adams and several other prominent photographers of that day belonged, were named that because of the f-stop:

The term f/64 refers to a small aperture setting on a large format camera, which secures great depth of field, rendering a photograph evenly sharp from foreground to background. Such a small aperture sometimes implies a long exposure and therefore a selection of relatively slow moving or motionless subject matter, such as landscapes and still life, but in the typically bright California light this is less a factor in the subject matter chosen than the sheer size and clumsiness of the cameras, compared to the smaller cameras increasingly used in action and reportage photography in the 1930s.

I presume that was for either a 4×5" or an 8×10" large-format camera. I will presume the latter in my question.

When you capture images on a medium- or smaller format, the magnifications needed to make an 8x10" print increase from the 1:1 contact print of an 8x10" capture. Therefore, just saying something is f/5.6 doesn't tell you the depth of field achieved in the final print.

From Wikipedia, we see this: 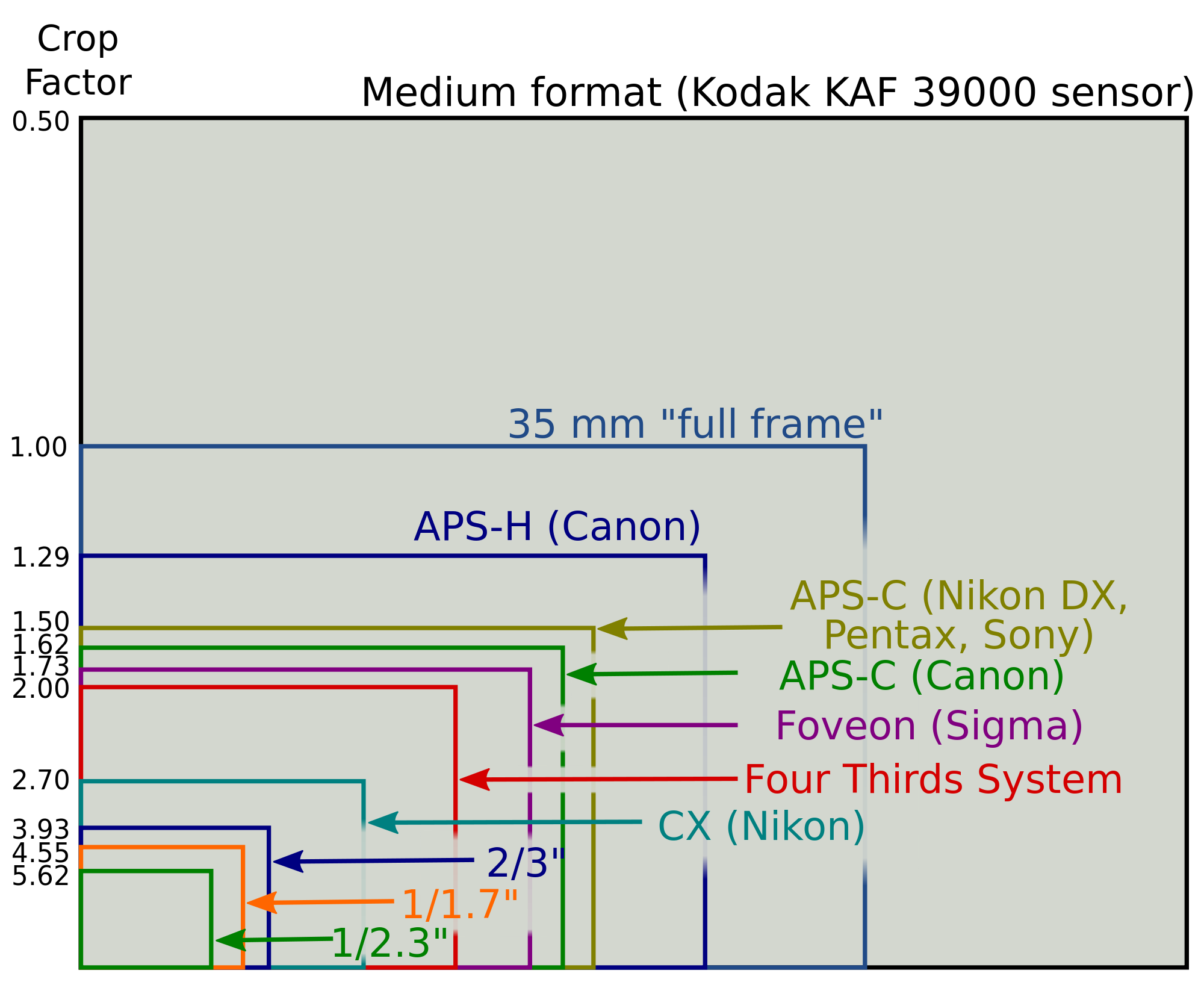 or going the other way, you have this:

If the Group/64 used f/64 for a certain look in their prints with their equipment, what would be the equivalent f-stop in the other format sizes?

Actually, if I just knew the formula based on the diagonal, I could fill out the rest myself. If an 8×10" transparency’s diagonal of 12.8" yields a certain effect stopped down to f/64, I figure we should be able to use a formula of some sort to derive all the others based on their diagonal. I just don’t know what that formula is, and would like to know, please.

For depth of field, you can use (for most practical purposes) the ratio of sensor diagonals — the crop factor. See Can a smaller sensor's "crop factor" be used to calculate the exact increase in depth of field?

Exposure per area is the same.

Other factors may also depend on sensor or film size and not translate in this way, of course. A larger area means more light overall with everything else equivalent, and that's an inherent advantage. But it sounds like you're primarily concerned with depth of field, and for that, crop factor will do it.

Depth of Field (DoF) is always a function of at least these variables:

As long as the two formats being compared are fairly close to the same height/width ratio then the ratio of the linear measurements of each format can be used to compare DoF when the images from both are displayed at the same viewing size, at the same resolution, and viewed from the same distance by a viewer with the same visual acuity.

Depth of field is related to f-stop and focal length, not size of the sensor directly. It is only indirectly related to sensor size because you'd pick a longer lens to get the same scene with a larger sensor. But f/22 on a 300 mm lens will have the same depth of field whether that is used as a telephoto for a "35mm" sensor (actually 24x36 mm), or a mild wide angle on a 8x10 inch large format camera.

Not the answer you're looking for? Browse other questions tagged digital f-stop 35mm medium-format large-format or ask your own question.

26
Can a smaller sensor's "crop factor" be used to calculate the exact increase in depth of field?
4
Why does getting closer or zooming in decrease depth of field?