Was there a film camera that was silent?

With digital cameras, when there is no mirror, an electronic shutter can be used to more or less eliminate any moving mechanical parts. That way, a camera makes little or no noise, making it useful for taking photos in quiet places.

In the film era, an electronic shutter was obviously not an option. Considering the sheer diversity and crazy designs that were around back then, did anyone ever release or create a silent or nearly silent film camera?

Bonus points if the film advance mechanism was very quiet as well!

I realise there were accessories that made shooting in quiet places possible, but this is more about whether there were cameras that were silent/very quiet as sold.

The original cameras didn't use film at all, so there was no noise from any film advance mechanism. Instead they used materials that were inserted in the back of what we now refer to as view cameras while being protected from exposure to light. Each image required changing out the entire back of the camera and replacing it with another glass plate that had photosensitive materials applied to one side of it.

The "shutter" in those early cameras was often the functional equivalent to a modern lens cap. Since the sensitivity of the materials used was so low as to require several minutes to properly expose a bright, sunny scene the level of precision obtained by removing and replacing a cap over the lens was sufficient.

As photo-sensitive materials improved and shorter exposure times were possible the need for a more precise method of beginning and ending the exposure was needed. Mechanical iris shutters in the lenses were activated by a pneumatic bulb that was squeezed by the photographer. As long as the photographer continued to squeeze the bulb, the shutter remained open. When the photographer released the grip on the bulb and it was allowed to fill with air, the shutter closed. These types of shutters made no more noise than the actuation of modern aperture diaphragms. In fact, in many cases the shutter was an iris that also functioned as the aperture diaphragm. The aperture setting selected by the photographer (or the single setting selected by the camera designer) determined exactly how wide the iris was allowed to open when the bulb was squeezed before it was 'stopped' from opening any wider. The Bulb setting on many modern cameras with focal plane shutters is a reminder of the time when photographers opened and closed the shutters on their cameras by squeezing a pneumatic bulb. So is the term Stop when used in reference to photographic exposure values.

After the invention of film, view cameras remained in use for many years. This is especially true regarding medium and large format cameras that could only accommodate a single film negative at a time. Most of Ansel Adams' work was created using such film based view cameras. By that time the shutter mechanisms, which still resided in the lens for view cameras, were mechanically actuated, usually by means of a spring driven release. This was still much quieter than the later two curtain focal plane shutters used in 35mm cameras such as the earliest SLRs and rangefinder cameras.

Most of the noise associated with 35mm SLR cameras is created by the rapid movement of the mirror, not the actuation of the shutter itself. Many film cameras had methods of locking up the mirror prior to the actuation of the shutter so that the noise created by the mirror cycling could be separated from the time when the photograph was exposed. Since rangefinders have no mirror, their shutters are generally very quiet. The vast majority of both SLR and rangefinder cameras used manual film advance that could be as quiet as a few almost inaudible clicks. The photographer also had the choice of whether to advance the film immediately after exposing it or waiting until a more opportune time when what little noise was created would be less of an intrusion.

In summary, for most of the history of photography cameras were fairly quiet. The generation of SLRs with high frame rates and motor drives to advance film were a fairly late development. Before those developments there was not a huge need for cameras quieter than the norm.

Many of today's upper tier DSLRs have various silent modes that either slow down the mirror so that it is less noisy (at the expense of maximum frame rate) or allow the photographer to separate the timing of the mirror movement and re-cocking of the shutter curtains from the actual moment of exposure.

A metal leaf shutter of an old rangefinder camera has relatively low sound. I have no decibel numbers to show, but I'd estimate the emitted sound to be only one fifth of the sound an SLR camera makes with shutter and mirror slap.

Here is a Youtube video I just recorded and uploaded. Tune up the volume on your speakers.

Shutter sounds of an SLR camera and a leaf shutter camera 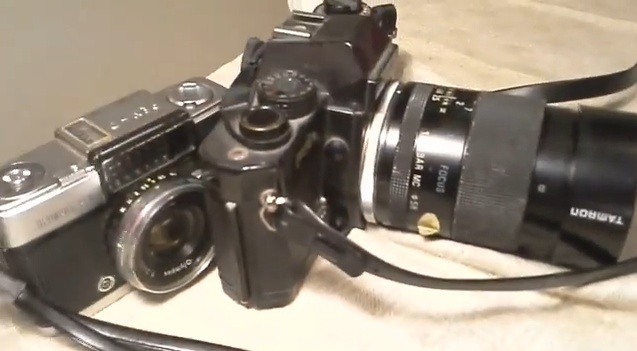 The early "black" Konica Hexar AF had a silent mode that was very good. For complicated reasons Konica disabled it in later versions of the camera. But it was still there in the firmware and could be hacked back into existence.

Plus it had a sweet 35/2. Plus active AF that focused perfectly in complete darkness. They even used IR for the active AF so there wasn't a visible spot.

I still have an Olympus XA2 camera somewhere. It had an extremely quiet shutter - not much louder than a pin drop. If I can dig it up I can try to record the sound of the shutter compared to some other sounds (like a pin drop). The film advance (manual/thumb click wheel) was considerably louder than the shutter. See http://mattsclassiccameras.com/olympus_xa2.html

There was a Canon Rebel model that had a semi transparent mirror, so half the light went to the viewfinder and half could pass to the film, so there was no need to flip the mirror, which is the loudest process on a SLR camera.

On a tween lens camera there is no need to flip any mirror at all, so the cameras were very silent.

Not the answer you're looking for? Browse other questions tagged film shutter history old-cameras vintage or ask your own question.

2
Film advance lever does not go all the way and shutter button locked
4
Where can I find B&W film for an Imperial Satellite 127 camera?
9
Why don't people care any more about shutter speed accuracy?
3
What is the precise model and background of this Kodak Six-20 camera with bellows?
2
Digital camera shutters
0
Minolta SR-101 Shutter stuck (?) but film advance lever works
5
Do any curtain shutters run in both directions, without reset between shots?
7
1960s-1990s third party lenses - why was the "lowest tier" cheaper to make?
3
How does electronic first curtain shutter match the second curtain?