Is it normal for autofocus to produce blurry photos under low light?

I use a Sony NEX-5R. I find that the autofocus often fails during low light, as in produces out of focus photos.

Sometimes it's clearly out of focus, and I can see that on the LCD, in which case I move the camera a bit to the side and back to get the autofocus mechanism to re-evaluate the scene, and then half press the shutter button to confirm the focus.

But sometimes, it looks fine on the LCD, but the result is disappointing.

Is this expected? Or is something wrong with my camera?

Here's a sample photo of the scene I'm referring to. This one was autofocused and is blurry:

while this was was manually focused: 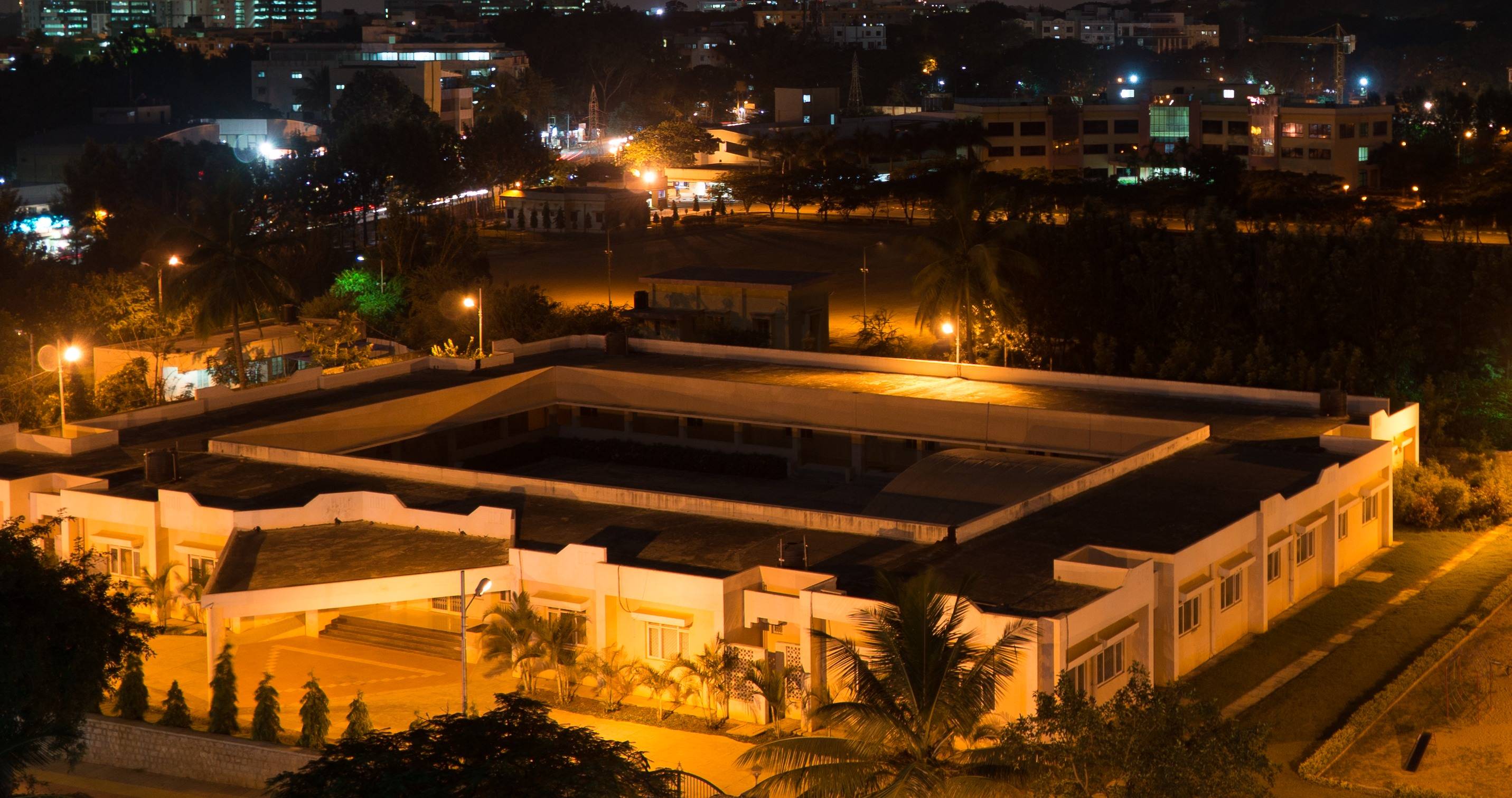 Both photos were shot with an F2.8 19mm lens at ISO 100 and in Program mode. The camera ended up choosing f/2.8 and a 2-second exposure. I enabled long exposure NR and electronic front curtain shutter. They were shot in RAW and exported as JPEG in Lightroom, with no post-processing other than the "sharpen for screen" present while exporting to JPEG. I used a tripod in both cases, with a ten second timer to eliminate camera shake.

Notice that there's plenty of contrast in this photo, and it's not anywhere as dark as the sample photo Esa posted below.

Hyperfocal distance for the F2.8 lens on my 1.5 crop factor camera is 21 meters, and everything in the photo is farther, so it's not a problem of DoF or too wide an aperture. Am I missing something?

Low light, long exposure and "landscape" photography like your example is typically where you want to use your manual focus, live view assisted by zooming in. AF points need contrast, and you should point your camera at the edges of the white illuminated walls to preselect focus, confirm the focus is correct, and then place your camera. In concert fotography I have to focus/recompose all the time, to even get AF right 3 out of 4 times. A lot of cameras require F2.8 or faster lenses to have accurate AF under normal light, so in dim light it needs even faster lenses.

But in a static situation like this you might as well go manual, as you need to confirm the AF result anyway. You might as well stop down, too, to around F5.6-F8 where your lens is sharpest (even without DOF considerations). Your dof is infinite at this distance even wide open, assuming normal focal ranges (17-55mm, as you dont mention it).

So the direct answer to your simple question is, yes, it is normal that lack of light leads to inaccurate AF performance, considering F2.8/F5.6 thresholds for AF performance in normal light, and also the type of scene in question, where you need to place the high contrast edges under AF points yourself. And your own experience that manual is more reliable is confirmed, since the hassle of setting up lock focus/recompose with the tri[od setup outweighs the manual focus process with liveview zoom.

Loss of sharpness in the dark is not all about focus.

Notice that in the dark your camera uses higher ISO and longer exposure time. Motion blur happens and low-light turns so easily into noise. And then you get unsatisfying photos because of the noise, de-noising, and motion. Noise makes for fuzzy outlook, denoising eats details, and motionblur is motionblur. Plus the bleeding of bright lights into neighbouring photosites.

Here a nighttime photo, a landscape illuminated by 3/4 moon only. In the lower lefthand corner you see a house with lights on in one room. The light was very dim, barely a reading light for someone reading a book in bed. Still the light was so bright that it bled all out of the actual window boundaries. Partly this was due to non-perfect focus, but more from the light bleeding out onto neighbouring photosites on the image sensor. 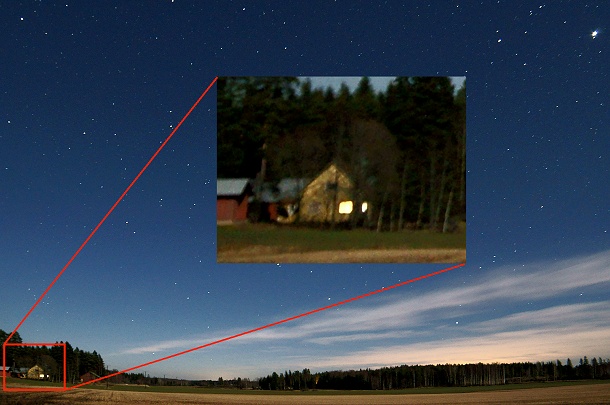 Based on your explanation and sample photo, the only conclusion I can come to is that you are trying to photograph a scene with great depth with a lens at a very wide aperture that will only allow a narrow depth to be in focus. I am not sure you necessarily have a focus problem...rather, you have a depth of focus problem.

You mentioned you are using a tripod, a long exposure, and using a fast aperture (f/2 or f/2.8). Assuming the image you posted is indicative of the type of scene you are generally working with, an f/2-f/2.8 aperture is going to be very thin, even at those distances. Distance scene content is very likely going to be out of focus, and if you are focusing on something relatively "central" in the frame, like that building, it is also likely that near scene content will be somewhat out of focus.

To capture a scene with such great depth, you really need to use a narrower aperture...and a MUCH narrower aperture at that. I would offer that f/11 or f/16 is probably REQUIRED to get the entire scene, from the near foreground trees to the distant buildings in acceptable focus. You may even need to use f/22, which would add some diffraction blurring across the whole scene, but likely LESS blurring overall than the areas that are currently out of focus (it appears that the distant buildings are actually rather considerably out of focus.)

You will need to increase your exposure time to do this. We are talking about many stops difference in aperture here, anywhere from 6 to 8 stops! You are going to need to increase your exposure time (reduce your shutter speed) by a similar number of stops. If you are currently exposing for say two seconds, then you would need to expose for 128 to 512 seconds! I assume that exposures that long are out of the question, so the only other option is to increase the ISO setting as well. We are probably talking ISO 800 to ISO 1600 at least, which takes care of three to four stops of the aperture difference. That would mean you need a shutter speed between eight and sixteen seconds (assuming you are currently exposing for around two seconds.)

If you want your entire scene in focus, then there really isn't much of a way around this. There are tradeoffs for each setting that affects exposure. Wider apertures reduce the depth of field, resulting in a non-linear blur curve as you move away from your plane of focus (in other words, a type of blur that is practically impossible to fix with post processing.) Longer shutter increases the chance that you will experience blur from camera shake, or result in motion blur for moving subjects in the frame. Higher ISO allows shorter exposures, but the reduction in true exposure (total light gathered at the sensor plane) and an increase in gain results in more noise. The trick is to balance these three settings to achieve the most acceptable result. For example, you may be able to get away with f/8, along with ISO 800 and an 8s shutter, at the cost of some additional blurring in the deepest depths of your scene.

I mentioned that you might even need to use f/22 if you are ok with very long (multi-minute) exposure times, and require the entire depth of scene to be in clear focus. I would also point out that linear and evenly distributed diffraction blurring is FAR preferable to non-linear and unevenly distributed iris blurring. Why? Because diffraction is a well understood convolution process, and correcting it in post is relatively easy...a moderate application of a decent sharpening algorithm will usually reverse most the effect of diffraction blurring.

I'm guessing you were shooting the scene through a window? A window much closer to you than anything in the scene perhaps? It appears your camera focused on the window rather than the scene beyond the window. The red AF Illuminator probably bounced off the window and back to the camera. Try turning off the AF Illuminator as discussed on page 130 of the NEX-5 User Manual.

As other have already mentioned, in a low light situation where you are using a tripod and a long exposure via timer you will probably get better results by using Manual focus anyway.

I would bet it's the camera's autofocus system that's causing you grief. I don't think you can find any camera or camera system that'll give you amazing autofocus under all conditions.

After looking at the operating manual (which I highly recommend) it seems you have 3 options for the focus area - Multi, Centre, and Flexible Spot.

If your camera is set to 'Centre,' it's likely the AF will struggle even if there's plenty of contrast around the centre and into the edges.

Setting it to 'Multi' would mean the camera will focus on the parts of the scene that contrast the most, so this would be best for the scene in your example photo. Note, however, that using this feature at very large apertures could throw the foreground or background out of focus.

Finally, if I'm not mistaken, 'Flexible Spot' allows you to choose the focus area yourself. I use this feature on my D7100 to auto-focus on on off-centre subject after I've composed the shot.

Having said all that, if you're using a (good) tripod and long exposure, focus manually and decrease the aperture to 5.6, 8 or 11. It should help sharpen things up. If you must use AF, then try fiddling with the focus area options and see if that helps.

I'll also add that the longer you expose your shots (at small apertures and low ISO) the better you'd want your tripod to be. The heavier the tripod is, the less vibration there'll be to blue your photos.

Not the answer you're looking for? Browse other questions tagged autofocus low-light sony-nex or ask your own question.

4
Why are these light trails large blobs of light instead of nice thin lines?
3
Do mirrorless cameras focus less or more accurately than SLRs under low light?
0
Can I filter by autofocus in Lightroom?

25
How do I focus in low light for long exposures?
3
All my photos were blurry
8
Why can't my camera autofocus in low light with a small aperture?
3
Where is Canon 1100D autofocussing in low light low contrast conditions?
3
Is focus hunting “normal behavior” for the Sony SEL18200SE?
3
Do mirrorless cameras focus less or more accurately than SLRs under low light?
4
What does it mean for a camera to be able to autofocus at EV 0 at f/2.8?
5
Why does exposure vary subtly between P, A and S modes, when the flash is on?
2
Is it normal for phase-detect autofocus to be inaccurate with a Canon EOS 750D and EF-S 18-55mm lens?
10
Blown out blue/red light making photos look out of focus