Is there an easy way to use my binoculars as a telephoto lens?

I own a Sony NEX-5R and a Nikon 7x50 binoculars. Is there a way to use the latter as a makeshift telephoto lens for the former, perhaps by buying some kind of cheap adapter (like $50)?

I'm planning on buying a telephoto (zoom) lens for the NEX, but it goes only to 150mm (FF-equivalent), while the binoculars go to 350mm. I can buy another telephoto lens, but is there a way to use the gear I already have, in the meantime?

I did try having a friend hold the binoculars in front of the camera lens, but it produces disappointing results like: 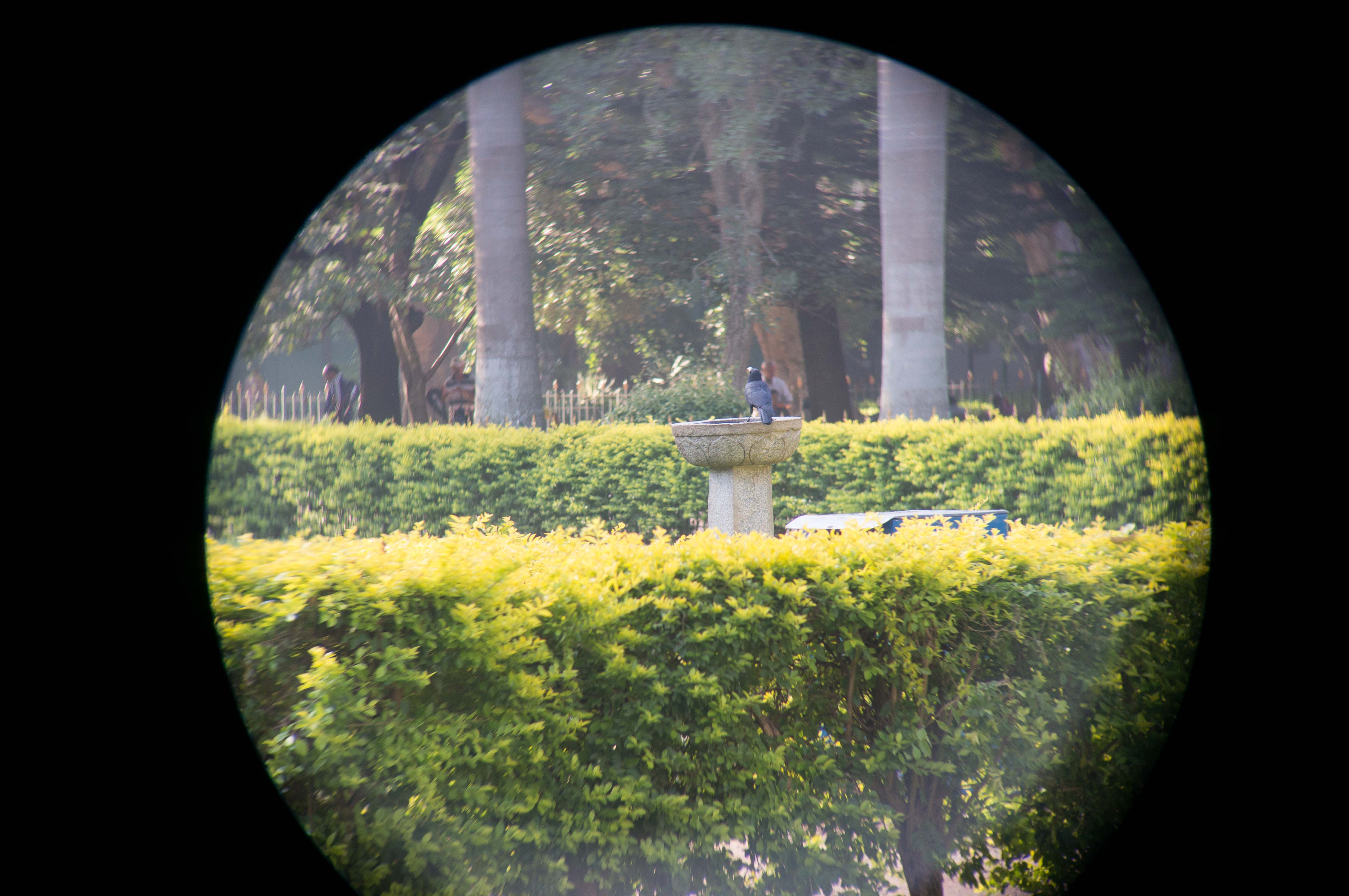 A lens designed for a camera is designed to project an image on a plane a certain distance back from the rearmost optical element, directly on the sensor or film. The distance depends on the camera model.

A binocular or a telescope is not designed to project an image on a plane, instead, think of it like a "telephoto adapter" designed for a particular type of camera: the average human eye. The difference is that the rearmost element in the telescope is not the final optical element in the light path to the sensor (the retina), instead, the light still has to be directed through the cornea, the crystalline and the vitreous body. That is what the other answer mentions as "some other optical modifications"

There may still be a chance that certain models of binoculars or telescopes project an image at a usable distance, but without advanced optics knowledge, the task of finding one is a trial and error effort.

Another challenge is that most telescopes and binoculars for consumer use do not have the optical quality of a dedicated camera lens. They are not developed using the same degree of research and design refinement, and almost certainly, they do not use the same grade of optical glass. This means that even if you find a cheap usable binocular, it will deliver distorted images and a lot of chromatic aberration, blurriness and possibly, a very unpleasant bokeh. (hence the huge price difference)

We usually don't notice the "defects" in our binoculars due to the powerful image processing of our brains. Usually we never get to see a steady image, but since our heads are in constant movement, the brain has developed the ability to "stabilize" the image for us. Also the brain deduces what we are seeing and completes missing information, so, for example we get to read a distant sign, but we don't notice we did it even without perfectly focusing (optically) on it.

But I don't really want to (completely) spoil the party. I have tried similar experiments myself. I have paired binoculars to point and shoot cameras and smartphones, and have also got kind-of-decent images of the moon shooting with a compact camera and a telescope.

All my experiments where handheld attempts, but the logical next step was to build some sort of bracket to hold both the binoculars and the camera together. The camera is easy to hold since it has the tripod screw hole. Ideally the bracket should have means to adjust camera position, allowing to align it's lens with the binocular's lens, and to fine tune the distance between them.

However, I wouldn't use a DSLR without lens because of the high risk of dirt getting on the sensor and shutter mechanism.

Finally, unless you have an extremely good binocular, you'll get better images by cropping from the images you can get from your current gear. And that may be good enough for on-line or on screen display and small prints.

Basically the answer is no you can't - not and get any sort of reasonable results. And certainly not on that budget. The resulting hybrid would be unmanageable to handle, (explaining the lack of demand), and there would be some optical modifications needed as well as a simple fitting adapter - which the binoculars do not have anything to mate with - because the focal plane distance for the camera is not likely to be the same as for your eyes.

Not the answer you're looking for? Browse other questions tagged telephoto diy binoculars or ask your own question.

14
Is digiscoping a good alternative to using a super-telephoto lens for birding?

10
For greater telephoto range, should I use 70-200mm + teleconverter or a longer zoom lens?
2
Which Telephoto Zoom Lens?
14
Is there an easy way to force chromatic aberration?
1
What is the best Canon telephoto zoom lens (around $1500-$2000) for general use?
3
What is a “2.2X Pro Telephoto” lens?
2
Do I need high end body to use telephoto lens?
5
Is it safe to use a telephoto lens when the camera is on a tripod?
2
Need help choosing a telephoto lens
3
Which lens focal length to match binoculars' magnification: An alternative approach
5
Why we can't use telephoto lens for macro objects?