How does the Curves tool work in GIMP?

I started using GIMP recently, and came across an option called Curves under the Colors menu. What does this tool do, and how do I use it correctly?

I get some good colors if I make a graph in 'S' shape. But what exactly is the meaning of it? How do I use this tool to enhance my photographs?

The GIMP's curves tool is virtually identical to PhotoShop's Curves tool. Almost all photo manipulation tools have a way of doing that action. There are a number of good explanations of it out on the internet if you look for photoshop: http://www.google.com/search?hl=en&q=curves+adjustment+in+photoshop

this one however is fairly thorough in it's explanation of what it's doing: http://www.cambridgeincolour.com/tutorials/photoshop-curves.htm

(disclaimer, it's been a good 3 years since I've used the GIMP, it's possible they've changed it since then, but I highly doubt it since the curves tool is one of the more fundamental advanced editing tools.)

Curves is a powerful and very flexible tool, which allows to control brightness, contrast and color balance very preciesly.

The way I approach the curves tool, either in Gimp or in any other editor is two-fold: 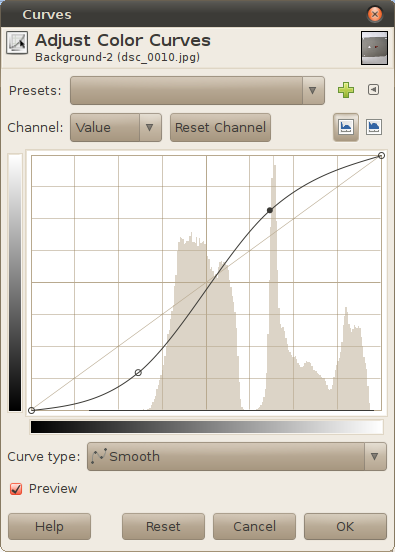 This curve will make the shadows darker and the highlights brighter; mid-tones will receive more contrast.

On opposite, the next curve will make the highlights darker and the shadows brighter. Also, it will “pull” more details out of shadows and highlights (they will receive more contrast, at the cost of lost contrast in mid-tones): 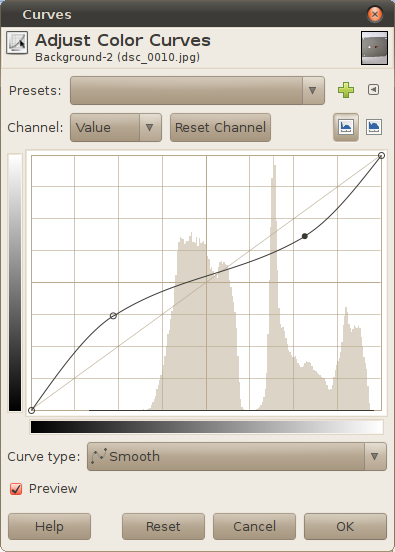 Not the answer you're looking for? Browse other questions tagged gimp open-source curves photo-editing or ask your own question.

5
What is a “Slanted S” in a curves layer?
6
How to/Best Methods to Correct Washed Out JPEGs?
4
How to interpret various curves present in post-processing applications?
1
Does the subject's face have too much red tint?

9
In ufraw, how to use the two curves?
2
Is there a way to get Gimp to use color curves from a Technicolor CineStyle S-curve lookup table?
10
Does Gimp have a Match Color function similar to that in Adobe Photoshop?
2
What is tactile photography? How can I start with it?
0
Programming curves tool how to work with RGB (combined) channel
2
Is it possible to shape an image in a non-rectangular shape?
1
Warp-sharp script not working in Gimp 2.8
1
Is it possible to simulate any color-only filter with curves?
3
Workflow and colorspaces in Darktable and GIMP for printing images?