I always have trouble getting sharper images from my 24-70 lens. I have watched numerous YouTube videos to correct this and its improved but not completely corrected. I am going on a trip and don’t want to ruin any images. I’d like to know what is the sweet spot for that lens and whats the best focal length for that lens to do some street photography. Thanks.

The original Canon EF 24-70mm f/2.8 L is sharpest at the plane of focus at 24mm and f/2.8 when tested on a Canon 5D Mark II. Stopping down yields very little increase in center sharpness and results in slightly softer mid-frames and corners (at the absolute point of focus.). As you move from 24mm to 70mm the edges get progressively softer. Of course at f/2.8 the Depth of Field (DoF) is fairly narrow, so only those elements in your composition that are the correct distance from the camera will be sharp at the widest aperture. When you stop this lens down you lose a little sharpness at the point of focus in exchange for a wider DoF. It is also fairly well known that there was a wider than normal copy to copy variation in sharpness for this lens, probably due to the issue discussed below combined with the way lenses are shipped from the factory to the distributor to the end user. A lens can be near perfect when it leaves the factory and be totally out of adjustment by the time UPS has moved it a couple of times. Here's a link to the EF 24-70mm f/2.8 L tested on three different Canon bodies. To view the actual test data instead of the weighted scores (that may or may not be weighted based on your criteria), click 'Measurements-->Sharpness-->Profiles'.

The differences at most focal lengths and apertures are almost negligible at the center, but the difference on the edges as the focal length and aperture increases is a little more noticeable when tested on the 5DII or 1DsIII. The argument could be made that on the higher resolution 6D and 5D Mark III this lens is ever so slightly sharper overall at 50mm and f/5.6 because there is not the same corner drop-off you see when this lens is tested on the 5D II or the 1Ds III. Having said that, this lens is for all practical purposes the same at almost all FL and Av until diffraction limited effects become evident. 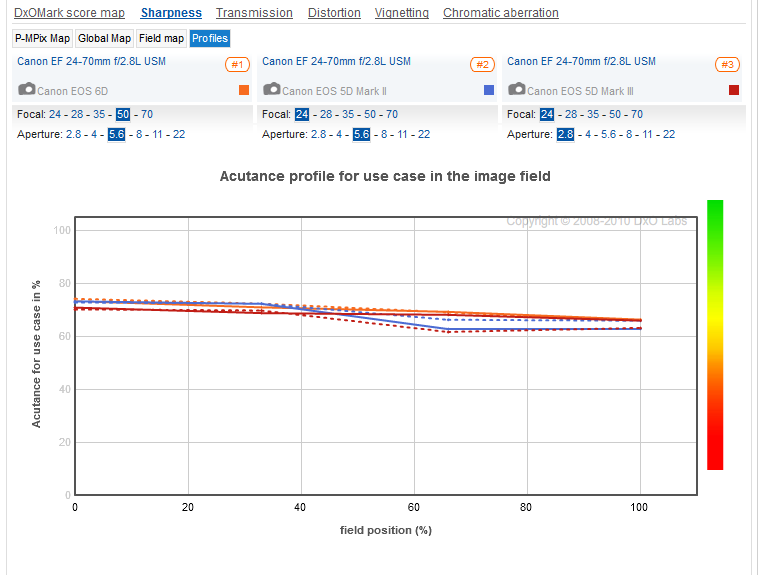 The design of the EF 24-70mm f/2.8 L is a little different than most normal zoom lenses: the barrel is extended at widest focal lengths and recessed at the longest focal lengths. This makes the lens hood, attached to the main barrel of the lens, more effective at all focal lengths as the angle between the front element and hood is altered in the correct direction when the lens is zoomed in or out.

Part of the design that makes this possible is that some of the adjustments used to align and center the lens are at the very front of the barrel and can be knocked out of alignment fairly easily if the lens barrel is struck or bumped around while it is extended. Anytime this lens is dropped it should probably be checked to see if it is properly aligned. For more on the technical aspects of the lens' susceptibility to mis-alignment from bumps and bangs, see Roger Cicala's blog entry at LensRentals.com. A less technical summary of the issue is near the beginning of this entry where he compares the EF 24-70mm f/2.8 L to the newer EF 24-70mm f/2.8 L II.

The 24-70mm f/2.8 L was a very good lens for the time in which it was designed but recent zoom lens designs such as its successor, the EF 24-70mm f/2.8 L II, perform at a higher level than lenses designed a decade or more ago.

It doesn't sound like the case from your question, but if you are getting sharper results in front of or behind the intended focus point consistently in the same direction you may be dealing with a front or back focus issue. It is possible to adjust the Auto Focus Micro Adjustment of your 5D Mark II, but unless you know what you are doing it could make the problem worse. Compounding the problem is that the shot-to-shot AF consistency of the 5DII's AF system is not one of its strong points. If the shots you take from a tripod and manually focused (using magnified Live View) are no sharper than when using Phase Detection AF, then AFMA is not the issue.

Not the answer you're looking for? Browse other questions tagged canon aperture focal-length canon-5d-mark-ii or ask your own question.

34
How do you find out the “sweet spot” of a lens?
9
How do I diagnose the source of focus problem in a camera?
8
Which offers better results: FoCal or LensAlign Pro?
0
Why do my studio shoots usually end up fuzzy?
1
Why are subject's eyes out of focus with EF 28-70mm F2.8 L?