What is the Zeiss Planar T* 50mm lens?

I was looking for a 50mm f/1.4 lens for Canon mount. I was looking at the usual options when I came across this one :

On that note, how will this Zeiss lens work on a APS-C Cropped frame camera?

Some of the Zeiss lenses are that much better than the comparable offerings from Canon, Nikon, or other third party manufacturers such as Sigma. This is not one of those lenses. It is not as sharp, has about the same amount of CA, distortion, and vignettes about the same as the Sigma and a tad less than the Canon when mounted on a full frame body. The only area where it clearly outperforms the other two is in terms of T-stop. It is about 1/3 stop faster at an actual measured maximum aperture of f/1.5 compared to f/1.6 for the Canon and Sigma.

Here's a side by side comparison in terms of sharpness at f/1.4 of the three lenses mentioned in your question. (As with all DxO Mark scores, the weighting of the overall scores may not be the same things that are important to you. Click 'Measurements-->Sharpness-->Profiles' to see the actual data from the tests. You can also see field profiles and other parameters such as CA, vignetting, distortion, etc.) As you can see, there isn't a lot of difference between the Canon and the Sigma, but the Zeiss is a step below them. Some might argue that the Zeiss would make a better portrait lens because it softens the subject a little in the center and a lot on the edges compared to the other two.

On a Canon APS-C body the edge of the frame would be at about 63% field position in the chart below. 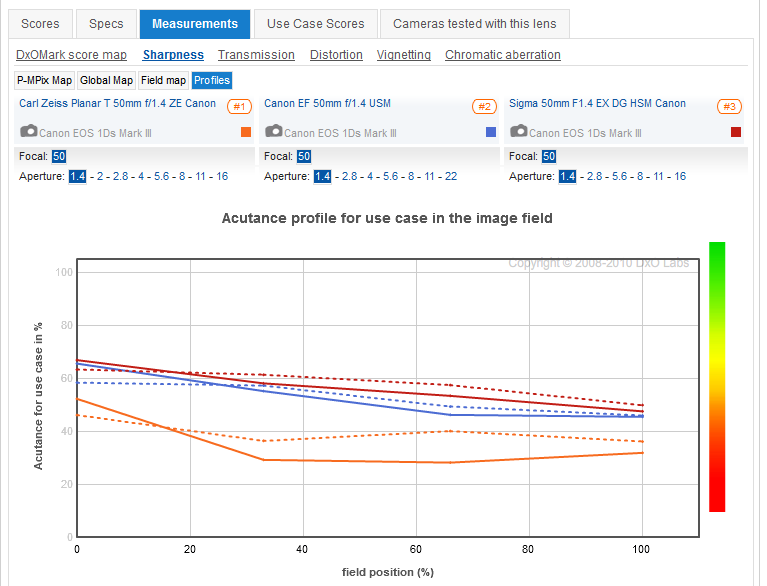 Now the Carl Zeiss Distagon T* Otus 1.4/55 ZE is in an entirely different league to any of these other three lenses, but at $4,000 USD it should be.

It works the same way the sigma and canon works on a crop camera.

I'd get the Sigma.

Not the answer you're looking for? Browse other questions tagged lens zeiss or ask your own question.

1
Is there a significant advantage to more expensive 50mm prime lenses?