Lightroom 4.4 - on synchronizing folder, LR says photos are missing but are not, and requests remove + re import?

I recently discovered that when I try to "synchronize a folder" in which I have added new photos to (CR2 raw files), this pop up shows up in Lightroom 4 (Mac): 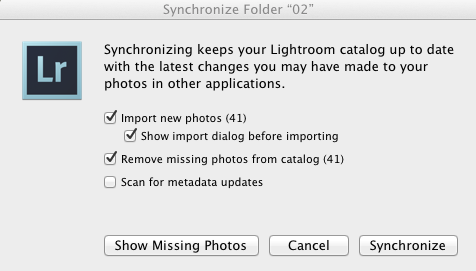 It says that my images in that particular folder are missing and tells me to "remove" them. But it also suggests that I import "new" photos in that same folder. These are the same files. There's nothing that's changed and yet it registers them as the "old" photos missing and there are "new" photos to import.

If I click the "synchronize" button, all my metadata and developing will be erased (if I'm correct) and I'll start with photos that just came out of the camera.

But the biggest question I have is this: I am not getting any (?) question marks on any of my photos and upon clicking on "Library > Find missing photos", there is no broken links between the catalogue and the photo files on my drive.

I have a folder called "2013" and inside it is "01", "02", etc for each month. But recently when I tried to sync "2013", it says that I should "remove missing photos 785" and "import new photos 785". These 785 photos are actually the same ones but LR4 is registering them as different ones. I tried clicking "synchronize" but unticking "remove missing photos". This caused my "2013" folder to duplicate on the sidebar in the library view and I tried merging them back to the old "2013" folder but it says "a folder named 01 already exists at this location". 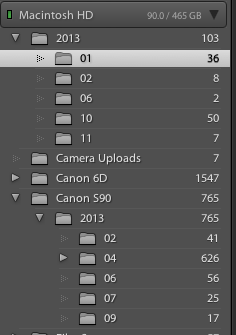 How can I fix this problem? I hope I'm clear enough for you to understand. I've tried Google, but all I could find is how to fix broken links between the LR file and the photo file.

Thanks so much in advance.

What I suspect happened is that you have moved some image files manually (via Windows Explorer or any software other than Lightroom) in the folders.

As a result, the Lightroom catalogue no longer finds them where it expects to find them, hence they are reported as missing.

Having found the some unknown images in a different spot, it asks to import them.

The only two solutions I am aware of are as follows:

1) Move the images back so that they are as Lightroom expects to find them.

2) To just accept it, BUT the consequence of that is that you lose any editing history as well as the current settings unless you use XMP sidecars.

Specifically because of such issues with Lightroom I would always recommend using XMP sidecars, because then you are able to retain any changes to a RAW image even without the Lightroom catalogue. In addition, XMP sidecars will be read in by CameraRAW (Photoshop) or Lightroom on another computer. XMP sidecars will however NOT save an editing history, not will they allow virtual copies of images.

So I found out how to fix this issue. All you have to do is create a new empty folder at the root of the mac's hard-drive. Name this "Image Folder Test". Now go to Lightroom, on the left panel, right click "My Lightroom Images" and "update folder location". Now choose "Image Folder Test" as the new location. Everything will have a question mark and your original "My Lightroom Images" will be gone, for now.

Next step is to right click "Image Folder Test" again on the left hand panel in Lightroom and click "update folder location" again. Now locate your original "My Lightroom Images". If it asks you to merge, just merge it. Now everything should be fixed.

This is what did it for me, hope it fixes the issue too for those who are getting the same problem.

I am not a pro but i'll try to explain with what I know. hope it gets some light to you.

It may be the timestamp difference that makes lightroom think that they are different photos.

Try exporting the metadata and then sync the folder and see what happens. in any case you can use the metadata(xmpp) and bring back the processing you have done.

It does seem like something went wrong somehow. My guess is that something did change under the hood on those files that is making them appear to be different to Lightroom. Why they don't show up as missing files is a bit of a mystery though. It is possible it has to do with metadata in which case choosing "Scan for Metadata updates" might help, but I don't expect it is that.

I have two thoughts for possible workarounds. The first is to manually move all the files to force them to be detected as missing. You can then do a find files on them and reattach the files and see if that fixes the problem.

If that doesn't work, your best bet is probably going to be to save your adjustments in sidecar files and then do the re-import. You will lose your history as you expected, but with the sidecars, the current state of your adjustments should survive the process.

Obviously it should go without saying to make a backup of your files and project before trying anything just in case something makes it worse.

I recently ran into the same problem. What seemed to fix it for me was simply to rename (within LR) the folder the images were in (I actually did this with a parent folder) and then change the name back. No steps in between. Weird, but it worked.

Just wanted to add this.

We had a similar situation with a customer, we tried everything up to building a new catalog. Changing the protocol from the network drive where the images resides on from smb to afp solved it.

Not the answer you're looking for? Browse other questions tagged lightroom workflow lightroom-4 macintosh or ask your own question.

14
Batch adjusting the date (but not the time) of photos imported into Lightroom?
6
How to best manage photos with Lightroom?
1
Is there an option in Lightroom for listing the missing (questionmarked) photos?
2
How do I change date folder name format in Lightroom?
0
Local lightroom catalog, photos on network share, but synchronize says 0 photos?
2
Lightroom synchronize finding all photos as new photos
0
Lightroom: Photoshop documents not displaying in catalogue
0
Lightroom- How to import into same folder from different day?
4
Lightroom - How Do I find Photos that are Missing Copyright Metadata?
1
How can I fully delete photos that I've removed from Lightroom?