What settings should I be using to photograph fireworks?

As it's heading into firework season (with Thanksgiving, Guy Fawkes, and New Years), I've never been particularly successful at photographing fireworks. In previous years I think I've always had too long an exposure, but what do you think I should be using?

Given the fireworks tend to not be in too predictable a location, would I be better off going faster with a handheld shot, or go longer and wider with a tripod, and crop later?

In addition to the tripod I use a remote to trigger exposures around 8 second. Or you could set it to 'bulb' (or the equivalent on your camera) and click to open and close the shutter manually with the remote, so you can capture the action you desire. 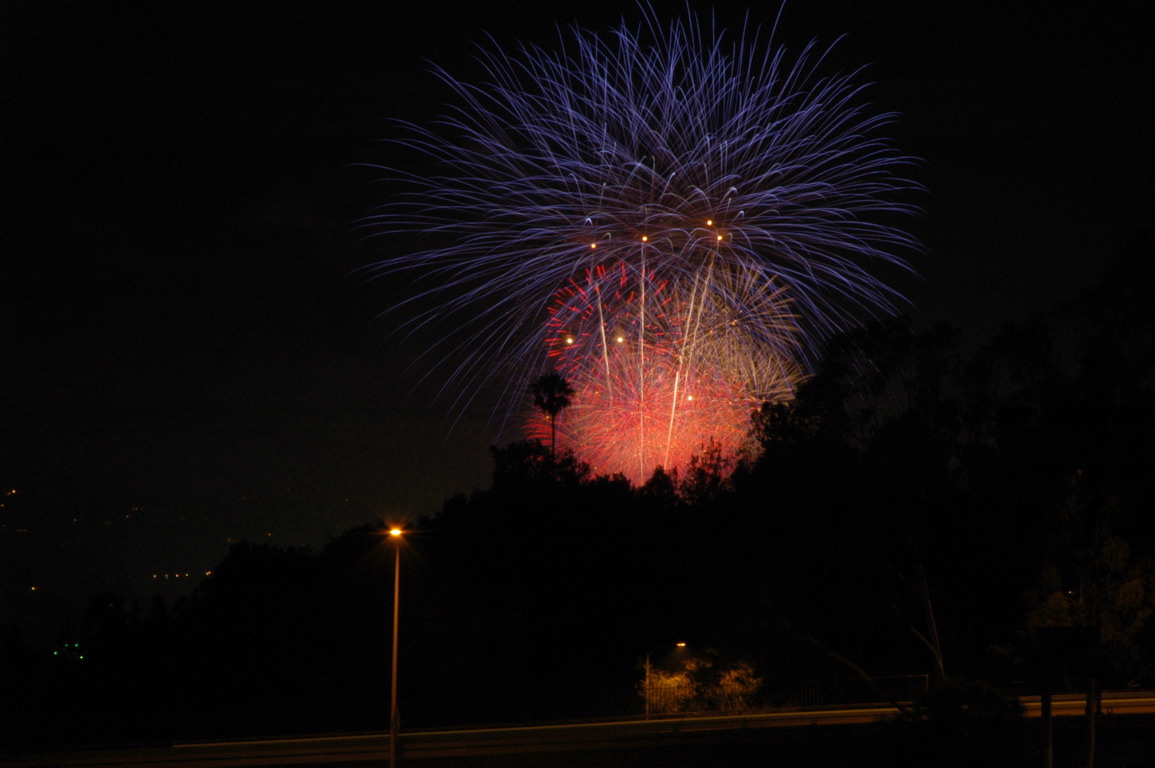 Take a tripod and experiment!

Different displays will suit different settings. Is it going to be mainly rockets, or will there be roman candles? Is the scenery worth capturing? And etc.

From experience you're going to want a tripod as your exposures won't be in the handheld range. I would also err toward very long exposures and shoot often — you're more likely to get several bursts in and you'll get some cool long exposure effects with clouds and water.

There a lot of very similar fireworks photos on the net so it's important to look around — it's not just about the expensive displays with the big rockets; you can cool effects with smaller fireworks. Also think of capturing the people along with the display.

Here's a few examples of what I'm talking about: 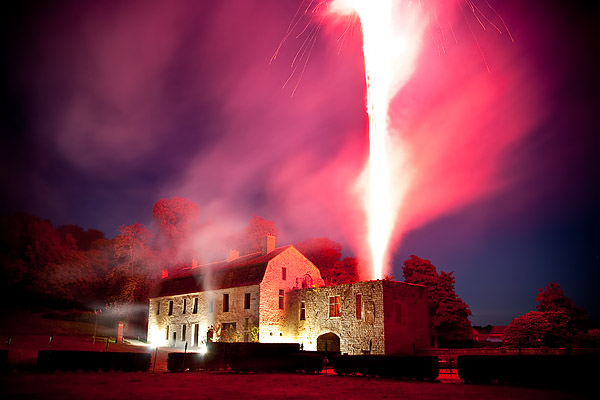 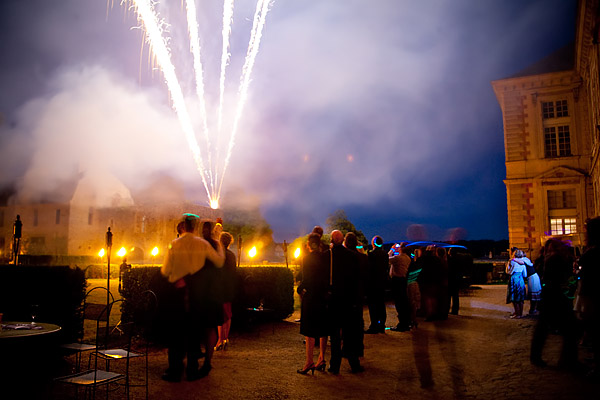 As most other answers suggest using long exposure times, I'd like to add that this is very dependent on the number and intensity of the fireworks themselves.

During bigger fireworks shows, long times like 4 seconds of exposure (even with a small aperture) would probably be too much and render too long trails.

Here is one example taken on New Year's Eve (2011) in Copacabana where 1.6 seconds and a not that small aperture (4.5 on a Canon Powershot) were enough for a decent exposure, including the people in front of the camera. 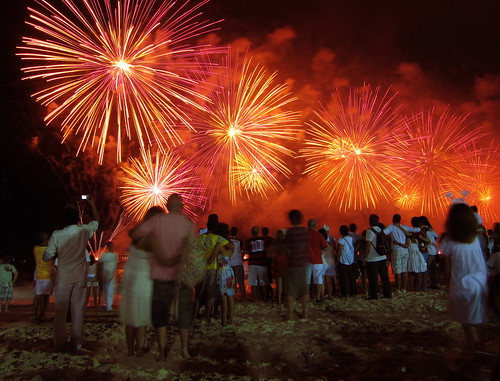 OTOH, there are times where you need more exposure time. On quieter moments of the show you may be able to use longer times in order to capture not only the fireworks but the also the (not much lit) foreground: 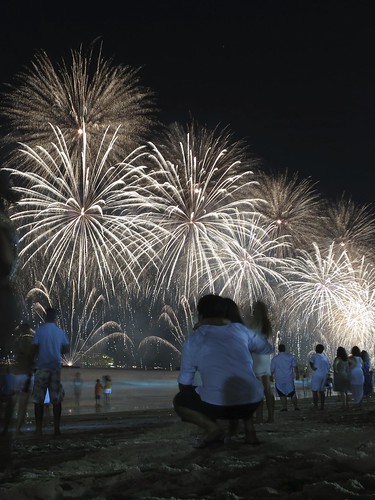 Here is what would be my checklist:

Try to take some shots before things start and the check background/foreground exposure, white balance and composition. It can be hard to setup things during the show and you may end up loosing a lot of shots during the process.

After you've found one (or two at most) position that looks good, wait for the first few fireworks in order to estimate the time it takes from the launching sound (usually lower in intensity) to the blasting itself. This will give you a rough idea of when to press the shutter if you are using the camera timer.

Once you feel the timing of the fireworks, shoot continuously. Just keep checking the results and adjusting the shutter time in order to get your desired trail length while keeping the exposure under control.

In the previous example, I started with a 4 seconds exposure and 8 aperture but found out that Rio's show was a lot brighter than expected and the fireworks were much faster too, so I had to quickly adapt and reduce the shutter speed while opening the aperture.

Concerning the location of the camera, even when using a tripod try to find a non crowded place (a harder than expected task since people are generally good at find the good places to stay). Since you will be using longer exposures, the camera will stay really vulnerable to vibration or to people jumping around. Depending on how close you are to the fireworks, even the sound of them can be enough to make the camera vibrate more than you would like.

One thing that I learned the hard way is that 28mm is not that wide when you are close to the fireworks launching pads. You maybe forced to choose (under quite a stress) between showing the fireworks completely or the foreground.

Here is an example of a 28mm lens being able to handle the composition of the fireworks and the foreground (note how blurred things are due to rain, people bouncing the pier where I was and wind): 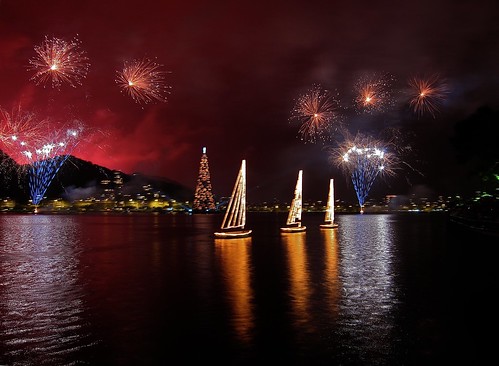 But on this other example, where the fireworks were launched way closer to the pier, it was not possible to include the boat reflections, even while clipping part of the fireworks top curves: 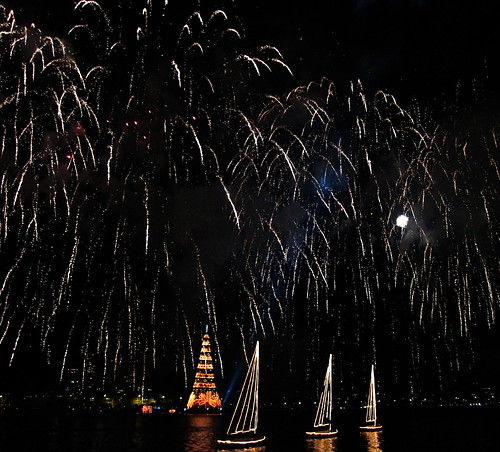 Shooting fireworks is a continuos learning experience, too bad we don't have many chances to do this in Rio other than on December 31th. :o)

I can't claim any deep expertise, but I made some fireworks photos this past summer and the "formula for next time" I came up with was:

The advice I read was to chimp a lot, which I agree with. One thing to keep in mind is that only a small percentage of the frame will be bright (i.e., just the fireworks themselves), which means the histogram of a properly exposed frame may not look as you expect -- if you expose to get the usual hump in the middle, it will be very overexposed.

The other thing that was a bit tricky is focus - turn autofocus off and leave it on infinity, but make sure you don't bump it (which is easy to do).

A lot of good advice here already - when I did my shots i did the following:

I did have the wrong lens - would recommend a wide angle

Here is one of mine

This was an answer to Akram's very similar but not identical question. Alas, he deleted iut while I was preparing the answer, so, here it is here.

I believe that shooting fireworks is close to shooting the moon, a very bright subject in a very dark sky.

There are very major differences between Moon and Fireworks photos.
Provided that a tripod is used, Moon photos can be taken at almost any ISO, shutter speed and aperture combination that suits.
Fireworks photos are relatively dependant on exposure time for effect. The time required varies with type and circumstance but is typically in the 0.5 to 4 seconds range with exposures of 10+ seconds making sense in some cases.

Exposure times are long not to achieve enough light input but to integrate the light trails over time. Where trails are developed in the air already, short shutter times may be OK, but in most cases it is desirable to have the shutter open during the formation of the trails.

A tripod or similarly rigid support is essentially essential.
The exposure times are long enough that while the trails will be captured well enough they will have unpleasant hand movement added to the trails.

To get "trails" an exposure time of 1 to 2 seconds is usually required, with about 4 seconds being useful for multiple similar airbursts.

The photo below is exceptional in that it shows many fully trails but is only 0.6s exposure time. This is because it is a finale and there was so much action that many different explosions are visible at once with fully developed trails.

Procedure is to choose exposure time to suit context and to then adjust aperture and ISO to suit exposure. ie exposure time is a non-free variable constrained by trail considerations. 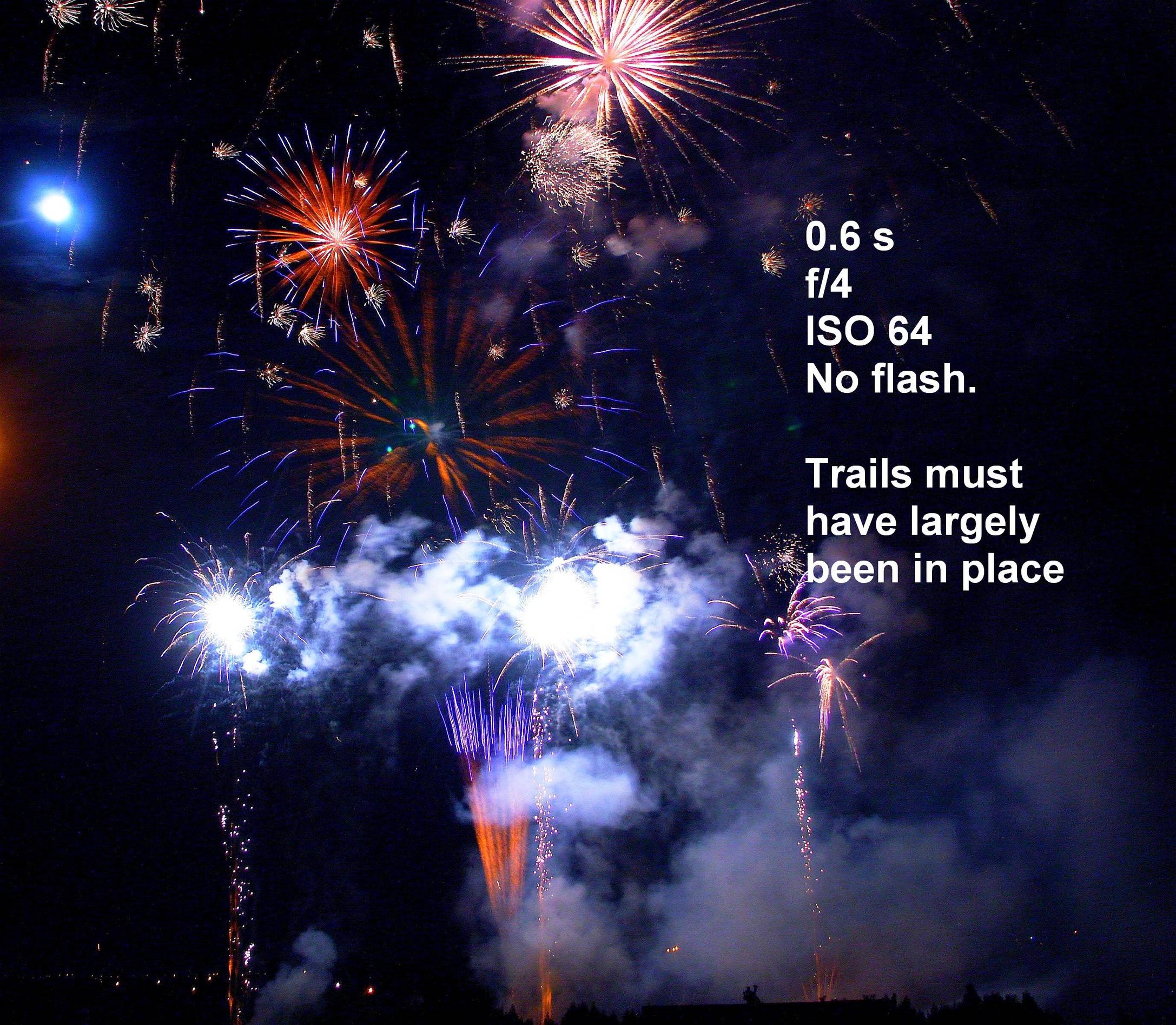 This collection of photos has a number of fireworks photos of different subjects and exposure conditions. Delays are from 0.6s to 10s. These photos are on the dread facebook but the link is a public access one and the photos will always be available. [Not placing them on Imgur avoids giving them irrevocable royalty free rights to do absolutely whatever they wish with them, which would otherwise be the case].

Click the arrow at top right of image to get full screen versions. Click image to get next image or use prev/next or in-image arrows to navigate. Settings are shown on the photos.

Hand held Roman Candles - don't try this at home: 3.2s + flash. Long enough to get several firings from each candle. Note trail in air above the rear users head.

Through the legs shot - don't try this at home or anywhere else - 10s. + flash. This was a multishot stand on ground unit. It failed physically and fell over and shot fireballs at various angles. Lethal. Person at left has miraculous escape as streamer passes between his legs. Long exposure allows multiple shots by firework.

creativeLIVE have a fireworks workshop video which you can watch for online free or pay to download for later. There's an hour-long "class" and a 15-minute demonstration.

If you plan on shooting fireworks tomorrow or on the 4th (or any other time), watch the video!

My strategy would be:

Some adjustment guidelines would be:

I'll attempt to demonstrate on fireworks snapshot I took this summer :-) 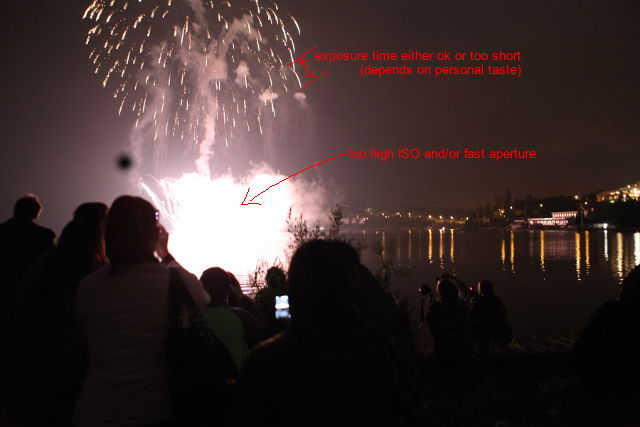 So the preferred way of correcting this would be to expose a bit longer, and try to avoid taking photos when there are big explosions on the bottom, since stopping down aperture might make the trails on the top too dark. But as the fireworks change all the time the best option would be to keep the principles in mind and then just experiment.

I got incredibly lucky with my Canon S70 -- the only smart things I did were to set the camera on a window sill (23rd floor view of the fireworks) and to use the two-second timer trick since I didn't have a remote and I wanted to avoid shaking when I pressed the shutter. The camera chose all the settings. You can see a few pictures here. I absolutely love how they came out -- the lights on the bridge, the armada of boats on the East River. This may be more a statement on location than on how to take pictures, but for the record, those were all f/5.3, 1s exposure, 21mm equiv.

Not the answer you're looking for? Browse other questions tagged low-light long-exposure shooting-technique fireworks or ask your own question.

1
Optimal settings to capture firework at night using Nikon D3200 with 18mm - 105mm Zoom Lens?
6
What unique techniques can I use for shooting fireworks?
4
Metering mode for fireworks shooting
1
Why did my fireworks photo turn out as "pegs"?

4
Metering mode for fireworks shooting
6
What unique techniques can I use for shooting fireworks?
18
How do I achieve fireworks pictures such as the hirobamboo method?
3
What are the proper settings for taking low light action pictures using Nikon D5100?
11
What settings should I be using to shoot "Supermoon"?
1
What are the best camera settings for taking pictures in a limo?
1
Why did my fireworks photo turn out as "pegs"?
8
How can I improve my fireworks photography?
3
Choosing between 9-stop and 10-stop ND filter for flowing water long exposures