How significant is the difference between Canon 5D and Canon 5D Mark II when using the same lens at open aperture?

Recently I've asked about the difference between two lenses on open apertures: Why do two lenses with the same F-number give different amount of light?

We realized that DSLRs gain the real ISO without letting us to know, when we shooting on open apertures. Matt Grum has linked to DxO article: http://www.dxomark.com/Reviews/F-stop-blues

And here's the chart from this article showing how many stops different cameras lose when we take pictures on f/1.2: 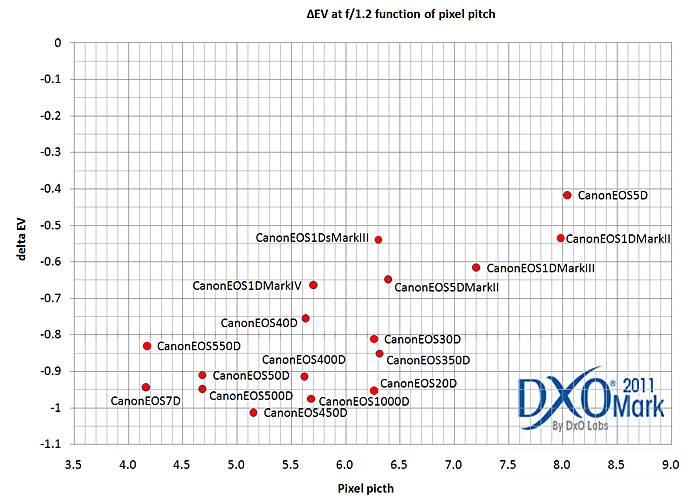 We can see here, for example, that classic Canon 5D has a better performance on open apertures than Canon 5D Mark II.

In that question, we also realized that the camera's ISO gain function doesn't work when we use a manual lens (without electric contacts with camera) or when we use a common lens and turn it around itself (so the camera loses contacts with the lens and doesn't know what aperture set on the lens). If the camera doesn't know anything about the aperture, it doesn't gain ISO at all, even if we really open the aperture (for example, f/1.2 or f/1.4) on our manual lens.

My wish is to verify, is that real that these two cameras has difference performance on open apertures.

Therefore I want to ask somebody who has both classic 5D and 5D Mark II and manual fast lens to make the real test of these two cameras. You need to take two shots using the same lens, shutter speed, aperture (f/1.4, f/1.2 or faster), ISO, focusing distance and distance to the object, but different cameras (5D and 5D Mark II). It also would be great if you has a tripod.

If you don't have fast manual lens, you can use a common fast lens, but you need to turn the lens slightly around itself in order to take away the electric contacts from the place where they should be.

I only have odd numbered 5Ds, but the pixel pitch is very similar between the 5DmkII and 5D mkIII so the results ought to hold up.

Here's the same scene shot using a tripod under the same lighting, 1/8s exposure ISO 100, f/1.2 (using the Canon 85L). RAW, converted with ACR with the same settings (everything on zero with a linear tonecurve).

I shot pairs of images with each camera, the first with the lens mounted normally and the second with the lens twisted slightly to break contact and hide the aperture info from the camera body:

The luminance values for the lightest grey patch with and without aperture information were 76 : 73 for the 5D and 75 : 70 for the 5D mkIII

As expected the difference in exposure is greatest with the 5DmkIII due to it's smaller pixels (the markIII loses more light with ultra-fast lenses).

However the difference between the actual and camera-adjusted images seems less than the 0.4EV and 0.65EV suggested by the DXO chart. So either the loses aren't as bad as DXO states or the camera is not adjusting the images by as much as it should do. Unfortunately I don't have the necessary equipment to say for sure.

I recently had a fairly lengthy debate about the whole issue of pixel pitch, ISO performance, and aperture on the Canon Rumors forums. Suffice it to say, while I did not necessarily change my opinion (my angle on the debate was different than that of my opponent), I found the following article on "Equivalence" to be quite enlightening, and expanded my opinion on the subject:

One of the most important quotes from this article would be from the MYTHS AND COMMON MISUNDERSTANDINGS section:

For a given scene, perspective (subject-camera distance), framing (AOV), and shutter speed, both the DOF and the total amount of light falling on the sensor are determined by the diameter of the aperture. For example, 80mm on FF, 50mm on 1.6x, and 40mm on 4/3 will have the same AOV (40mm x 2 = 50mm x 1.6 = 80mm). Likewise, 80mm f/4, 50mm f/2.5, and 40mm f/2 will have the same aperture diameter (80mm / 4 = 50mm / 2.5 = 40mm / 2 = 20mm). Thus, if we took a pic of the same scene from the same position with those settings, all three systems would produce a photo with the same perspective, framing, DOF, and put the same total amount of light on the sensor, which would result in the same total noise for equally efficient sensors (the role of the ISO in all this is simply to adjust the brightness of the LCD playback and/or OOC jpg).

We all know that a 50mm on FF is NOT the same as a 50mm on APS-C...hence the importance of understanding equivalence. This applies to sensors of the same size but different pixel pitch as well, since it effectively becomes a non-factor when the total sensor area is taken into account (only sensor efficiency, which boils down to read noise, really matters.)

This is probably one of the most informative articles on what REALLY MATTERS when it comes to exposure in photography. There are a lot of debates about pixel pitch, ISO and true sensor sensitivity, etc. But when you boil it all down, equivalence is really what matters, and everything else is just fluff. Before you comment, it is important that you read everything in the article at least up to the noise section, and preferably read the ENTIRE article (yes, I know its very long, but it once you finish it, you'll probably find you don't need to ask this kind of question.)

Not the answer you're looking for? Browse other questions tagged aperture canon-5d-mark-ii fast-lenses canon-5d comparison or ask your own question.

22
Why do two lenses with the same F-number give different amount of light?

19
Do DSLRs play games with ISO when used with fast lenses?
1
What is the quantitative relation between f/# of the lens (aperture), exposure, and ISO?
2
What is the difference between canon 5D mark II and mark III?
4
Does micro 4/3 have an advantage in low light due to aperture equivilence?
5
How can I shoot in a studio at the widest apertures?
2
How significant is difference in dynamic range between Sony A7 and Canon 5D Mark II?
2
How does a manual lens know when to adjust the aperture?
1
How do photos of the same subject compare between the Nikon D700 and D70?