What is this dead pixel problem really called?

On all photos from my last vacation I see this red point. It appears on in-camera JPGs as well as on RAW files. A see a red pixel in the same position on all pictures. How is this problem called? Is it a dirty point on the sensor, dead detector or some other more serious problem? How can I fix it? 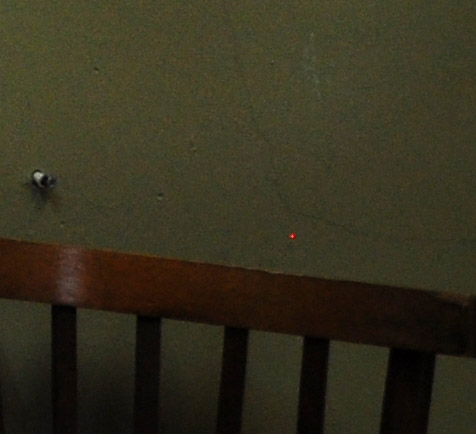 Most consumer digital cameras nowadays do automatic dark frame subtraction, which should hide any stuck pixels. (Actually, just plain subtraction would only make the pixel black instead of red, but pretty much all decent dark frame correction algorithms also detect stuck pixels and interpolate over them.)

In fact, the automatic dark frame subtraction is the reason why such cameras often have a noticeable delay between the shutter closing and the picture actually appearing on the screen, especially with longer shutter times, since the camera needs to take a second exposure for the dark frame after closing the shutter.

It looks, for some reason, your camera isn't doing that. If it's a high-end or "prosumer" model, it may have a configuration menu option to disable dark frame correction, and you may have done that without realizing it. If so, simply re-enabling the feature may be enough to fix the problem.

Alternatively, if you want, you could shoot your own dark frame and use that to correct your photos afterwards. (Most decent digital photo post-processing programs should be able to do that.) The dark frame is simply a picture which is completely dark, except of course for sensor noise and stuck pixels, taken under similar conditions as the actual photos. Simply taking a picture with the lens cap on should give you a pretty good dark frame.

Note that, if you do this, using RAW mode for both your photos and for the dark frame is highly recommended: JPEG compression blurs stuck pixels and makes correcting them properly very difficult.

Some cameras may also have "semi-automatic" dark frame correction feature, where you can tell the camera to take a single dark frame and then save it and use it for any subsequent photos. If yours has that, you may simply need to tell it to retake the dark frame (which you should do always before shooting, anyway, or whenever you change the exposure significantly).

A dead pixel is just the opposite: no matter how much light strikes it, the pixel reports no light. Sometimes a dead pixel will be masked by the interpolation of colors surrounding it being assigned to that pixel.

The only way to fix it is to do what is called pixel mapping to tell the camera to ignore the signal from the stuck pixel. Some cameras do automatic pixel mapping "hidden" in other routines. With Canon, for instance, if you use the manual cleaning option to open the shutter the camera also creates a new "hot pixel" map. If you leave the camera in Live View for a few minutes first so that the sensor is heated up, more pixels will be mapped out. You can then let the camera cool and do it again to map some of those marginal pixels back into active use. A new pixel map is also generated each time the firmware is updated. Other cameras have user accessible manual pixel mapping. Some require a trip to a service center. Short of that, you could use a dust delete tool or repair tool to mask the hot pixel in each photo, but that is a tedious way to go.

Not the answer you're looking for? Browse other questions tagged terminology sensor hot-pixels dead-pixel stuck-pixel or ask your own question.

2
How do I prevent and/or remove hot pixels in my shots?

4
How should one deal with 'hot' pixels on Canon T1i, either in-camera on in Aperture?
6
Does this look like a sensor problem?
8
Why is my camera showing a lot of stuck red and white pixels?
2
Are these strange splotches on buildings in a long-exposure photo hot pixels?
2
Little cross on photos with slow shutter speed. Is this a hot pixel?
0
can you remove a hair on the image sensor in light room?
7
What's the best way to deal with hot/stuck pixels in long exposure night photographs?