What would appear on polaroid film exposed without a lens?

I am trying to get a better understanding how lenses & focusing works.

Imagine looking at the wall opposite to the TV. Would the TV project a sharp image on that wall? Or even a blurry one? No. The wall would just be quite evenly lit by the light coming from the TV. If you held a piece of photographic paper in front of the wall, it wouldn't make any difference.

This is because the light from the television is not directional. Each pixel is like a miniature light bulb that sends light to all directions in front of the TV. Thus, if you think of any single point on the wall (or on the film!), it is hit by some light emitted by every point on the TV, basically receiving the average of the colors in the picture shown.

Now, what we would like to do is to somehow force the light from one point on the TV to only illuminate the corresponding point on the wall. The most elementary way of ensuring this would be to hold a large piece of cardboard in the middle of the room, with a tiny hole in the center. What would happen then? The cardboard would block almost all the light from hitting the wall, but for each point in the TV picture, a tiny patch of the wall would be visible through the hole and illuminated by that exact point.

What we just invented is called Camera obscura, also known as a pinhole camera. You can take a shoebox, tape a piece of photographic film on one of the inner walls, punch a pinhole through the opposite wall, and have an extremely primitive but functional camera.

What's the point of expensive lenses, then? The primary issue is that only a tiny amount of light gets through that tiny pinprick. Thus, even on a sunny day and with a sensitive film, you would need very long exposures to get anything approaching a well-exposed image. If you enlarged the pinhole, more light would get through, but the picture would get blurrier. What lenses basically do is allowing a larger opening, with more light getting through, but still focusing the light from a single point on the subject to a single point on the film (or silver screen or sensor). They achieve this by clever application of the laws of optics (especially Snell's law) and geometry.

Another problem with very small apertures (as the hole letting light into a camera is called) is diffraction. Light waves traveling very close to a sharp edge get bent to some degree when they pass the edge. In photography, this results in a certain amount of blurring in the image. The larger the aperture, the smaller the percentage of light that is diffracted because most of the light doesn't pass very close to the edges of the aperture.

How does focusing relate to all this? Remember when I said that like a pinhole, lenses still project a point on the subject to a point in the resulting image? I wasn't entirely truthful. The thing is, with any realistic non-infinitesimal aperture, only light originating from a certain distance in the scene will have that point-to-point correspondence, with the images of points either closer to or farther away from the camera getting blurrier. By changing the distance between the lens and the film, you can change which part of the scene is projected sharply - that is, in focus. The larger the aperture, the shallower the part of the scene gets that can be said to be reasonably sharp.

For some very nice demonstrations of the above concepts, I recommend taking a look at the Flash applets provided as supplementary material of Stanford's CS178 digital photography course.

The film would be evenly or near evenly exposed as white if you just exposed it with a TV in the corner of the room because light from each part of the TV radiates outward and hits all parts of the film at varying degrees of intensity (based on the angle from the source of light).

Directly on the TV, it still wouldn't be particularly sharp because there would still be some space in the glass for the light to diverge from the source, but you would be able to make out the image probably since the light from one side of the image wouldn't be able to spread out enough to reach the other side. You would have to be careful not to over-expose it, but would likely get a recognizable image, if a bit blurry.

The point of a lens is to take light that is coming in from a variety of angles from a particular point and resolve it all to one focused point. This way a light field is resolved to an image. A light field is all the different rays going in all the different directions from all the light sources in the room. An image is the resolution of that light field to a fixed image plane of a fixed size with the image focused such that the rays all converge back to a single point (or at least whatever rays enter the front element at an angle that the lens can resolve).

In this image, the blue lines are the light coming from a pixel on one side of the TV and the red lines are a pixel on the other side. The solid lines show that the light goes off throughout the entire room and the dotted lines show the portion of the light that reaches the front element of the lens. The lens then changes the direction of those rays so that they converge back on the film or sensor as a single point that is on the opposite side from the source (this is why the image flips over going through a lens.) 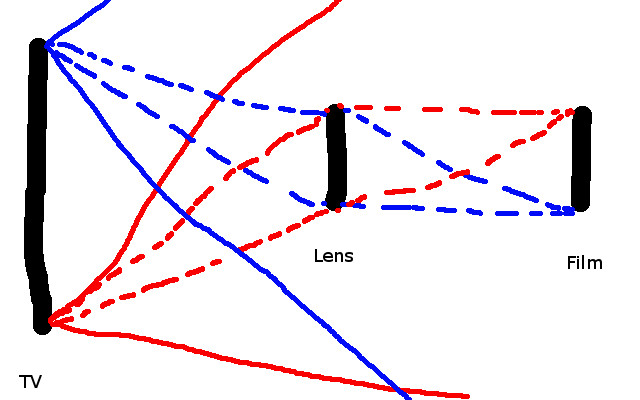 Not the answer you're looking for? Browse other questions tagged lens focus camera-basics or ask your own question.

9
Why are objects far away inverted through a lens but not through the viewfinder?
5
How can I quickly tell without testing if my lens is parfocal or varifocal?
6
Nikon PC-E Lens .. would it work for me?
2
Why image at 400mm is LARGER THAN DOUBLE of image at 200mm? (according to lens formula)
1
What happens if i rotate the film rewind?
2
What would happen if a lens had translucent aperture blades?
6
Can you determine if focus is sharp without diopter adjustment if your sight is imperfect?
43
Can you tell from a blurry photo if focus was too close or too far?
0
What makes these white stars appear black?