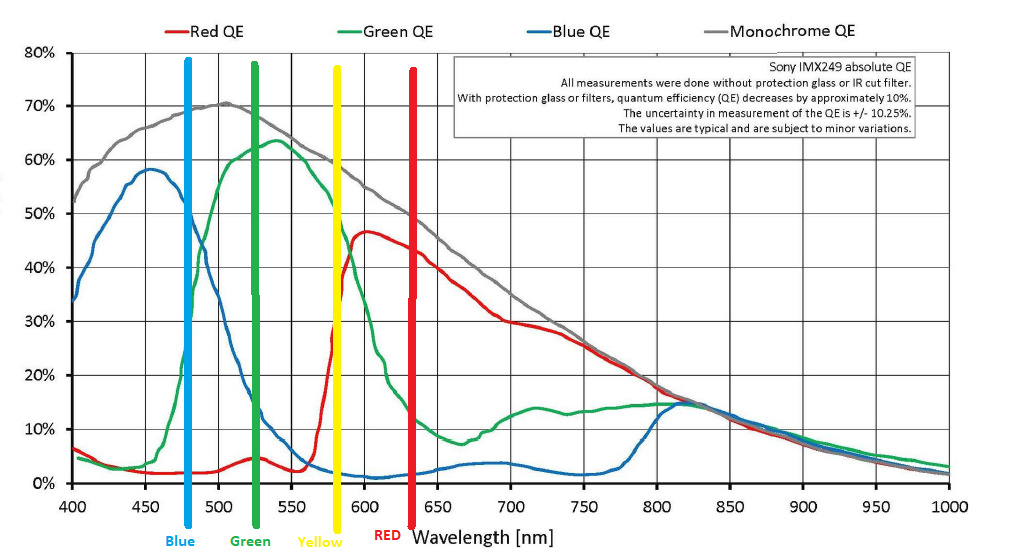 As one can see, the green filtered pixels on a Bayer sensor array are the most sensitive to light. Additionally, half the color filters on a Bayer array are green, with only one-quarter being blue and the remaining quarter being "red". This makes our sensors more sensitive to the middle of the visible spectrum that to either end of it. The sensor referenced above is most efficient with light just above 500 nm.

Once we also consider that sunlight when filtered by the Earth's atmosphere is also brighter in the middle visible wavelengths than on the extremes, it should become clear why our eyes evolved to be more sensitive to those middle parts of the visible spectrum and why we design our camera sensors to also be most efficient at those middle wavelengths.

As the illustration above shows, sunlight is strongest at these middle wavelengths and our eyes and cameras are most efficient/sensitive at those same wavelengths. So even though there are three different color filters on a Bayer mask, we don't lose fully two-thirds of the light with a reasonably efficient sensor. 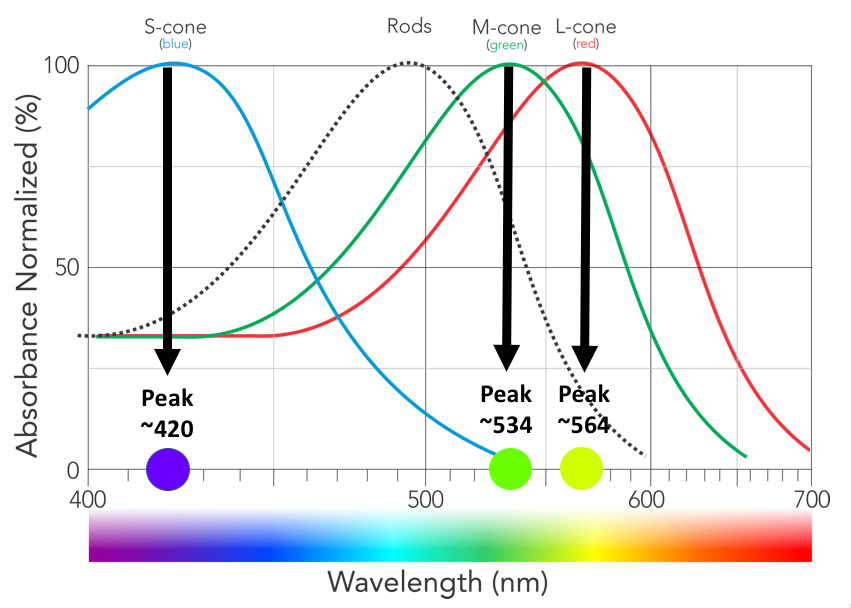 The colors used in Bayer filter arrays mimic the human eye, where our 'red' cones are centered around 565 nm, which is a greenish yellow, as opposed to our 'green' cones that are centered around 540 nm, which is green with just a tint of yellow mixed in. Our 'blue' cones are centered at about 420 nm. For more about how both the human vision system and our cameras create "color" out of the portion of the electromagnetic radiation spectrum we call "light", please see: Why are Red, Green, and Blue the primary colors of light?

56
Why are Red, Green, and Blue the primary colors of light?
11
What would happen if a camera used entirely different primary colors?
3
Do smartphones suffer from degrees of chromatic aberration? If so, how is it possible?
1
How sharp are RAW photos before processing?
5
6500k calibrated monittor - what are the RGB values to represent a given monochromatic radiation of known wavelength?
1
Megapixel number - how many sub pixels?
3
What effect does the body have on the character and quality of images?
2
Are RAW images really RAW?
2
How to get Shotwell to see Rawtherapee edits to RAW images?
1
How can a camera pick up and process colors?
See more linked questions

34
How can knowledge of human perception of color be used in photography?
2
Reducing color balance errors across multiple cameras
4
Why don't sensors have a wider aspect ratio?
8
Why are there no rotatable sensors instead of grips for portrait photography?
2
CCD sensors use a digital shutter. Why don't the more expensive CMOS sensors?
11
What would happen if a camera used entirely different primary colors?
43
Why don't cameras offer more than 3 colour channels? (Or do they?)
49
Why do we use RGB instead of wavelengths to represent colours?
2
Can an RGB channel be shifted to increase color gamut into the violet range?