CHDK generated DNG has no preview

I have recently bought a used Canon A550 and tried using CHDK with it. I firstly wanted to use it as a time-lapse camera, so I installed the Ultra Intervalometer on the camera and enabled RAW file support.

All went well, however, the DNG files that come out of the camera have no preview. I can not use my Mac's Quicklook on the files to check the contents.
The files do have small thumbnails though.
I need to import the DNG files into Lightroom and update the DNG previews & metadata (this function is found in the Metadata menu when in Library mode) to get the previews right. For several hundred DNG files this process takes a while as Lightroom takes around 2-3 seconds to process each image. Is there a way to command CHDK to generate these previews when writing the DNG to the card?

Update:
Here's a screenshot of the thumbnail to show the difference with a preview. This screenshot is taken in the Ligthroom import window. As you can see it has a lower resolution than a regular embedded preview. 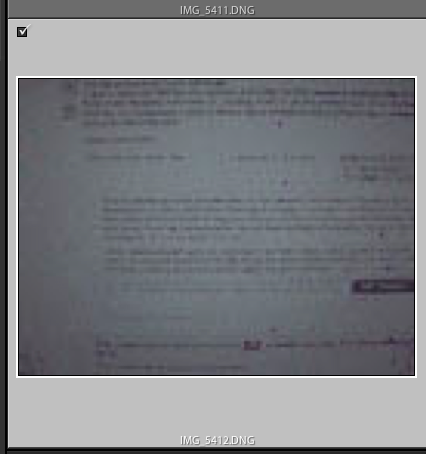 The reason I want this is because LRTimelapse needs these DNG previews to build a pre-rendering of a timelapse. If the embedded DNG preview is not present it shows this error: 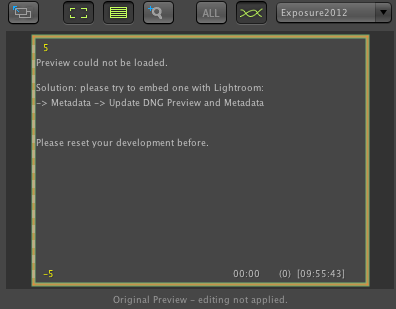 What strengthens my belief in that this is not an OS side problem but a problem of CHDK/the camera is that when I validate a CHDK DNG (Library -> Validate DNG Files), before updating the preview, Lightroom says that the DNG is not valid. After updating the preview it's shows the same image as valid. So there must be something "wrong" with the DNG before I update the preview.

I have uploaded two DNG's straight from the camera. These show fine in LR, as LR builds its own previews, but they lack an embedded preview image.

I've asked the question over on the CHDK forum and got the reply that it's technically possible to embed the preview image when the DNG is extracted by CHDK, but it would slow down the process a lot.

The advise was to use my computer to batch embed all the previews, just as I was doing already.

Not the answer you're looking for? Browse other questions tagged canon raw chdk or ask your own question.

5
Can I embed existing JPEG's into DNG's as a preview?

30
Why does my Lightroom/Photoshop preview change after loading?
5
How to automatically apply a Lightroom Preset based on appropriate (Canon) Picture Style on import
3
How can I edit the capture date in Nikon raw file
1
What's the resolution of the embedded JPEG preview in a Canon 7D MkII RAW image?
5
Is there a way to set white balance of a RAW to match the preview JPEG?
0
DNG Compatibility in Adobe Lightroom
4
How to find corrupt CR2 files?
2
Regenerate DNG previews in Lightroom 3
0
conversion from RAW to DNG (Adobe RAW) leads to unwanted crop