How can I depict vehicle traffic during daytime in a long exposure without washing out the vehicles?

I would like to take a picture of a street during the day to depict how much traffic and cars there are on the street. Is there anyway to do this with a long exposure photograph? I have a Nikon D90 and I set the f stop down to 1/16 (the lowest of my lens) and set the time to 2 seconds. Doing this, the exposure is almost saturated when taken around 5pm with the sun setting behind a tree. Doing this, the cars passing by were very hard to make out against the stationary background, being visible as a blur in the color of the car.

Perhaps this is not possible and I should just do this at night where the cars lights are much brighter than the background.

Please suggest how else I might depict the traffic in a photograph? Are daytime long exposure photographs even possible?

One of the photographers that I find most interesting in the area of long exposure is Michael Wesely (yea, the website doesn't really do anything to show his photography). 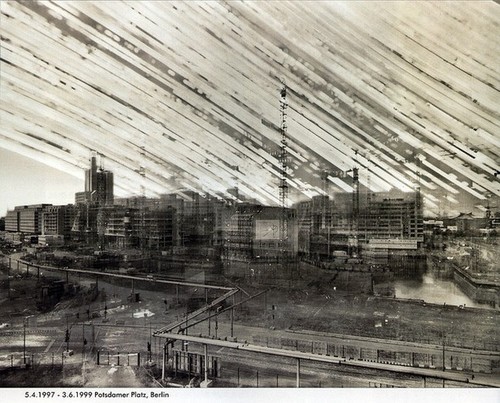 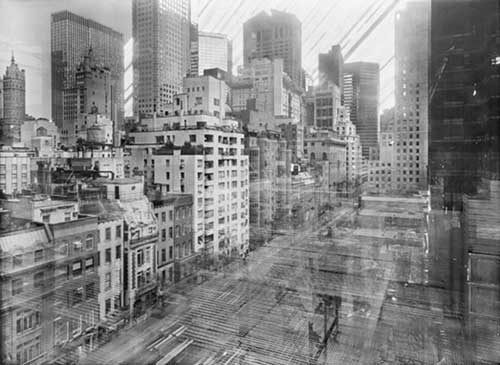 The first one you can see the date on it... it was shot from May 4th, 1997 through March 6th 1999... almost two years. The tracks in the sky are where the sun traveled each day (or actually, two days for each track).

So yes, you certainly can take a long exposure during the day time.

What you need is a stack of neutral density filters... although you can make your own that will give you quite a few stops by using cross polarizers. You can either buy these (they're often called VariND or VND filters) or make your own using a pair of polarizer filters (note: you need the outer filter to be a linear polarizer, not a circular polarizer.

Look at that second photograph from Wesely and note that with a long enough exposure, you won't see the car itself, though you might be able to get some hint of its lights.

For capturing traffic, you are going to want something that isn't quite as extreme as the photographs of Wesely. You'll want to see about a properly exposed 1 second photo and then work from there. There are many factors that play into this - the distance from you to the traffic, the focal length of the lens (field of view), the speed at which the vehicles are moving... all that plays into trying to capture the proper image.

Note that often the most striking photographs of traffic come at dusk when you can get the cars with their lights on (white in one direction, red in the other, and maybe even some yellow blinkers). This will also aide in getting the long exposure.

Consider the image on this post. A small section of it follows: 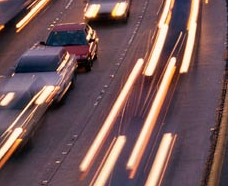 This isn't necessarily saying that this is the right exposure for your setting... but it gives you a starting point and the tools to work out about what exposure you are looking for.

And from this, you'll be able to go and get an appropriate set of neutral density filters to try to capture the image.

I'll also point out that dusk is about six stops from full sun.

You are achieving somewhat long shutter speeds of 2 seconds. But the problem is the result of this is that the moving objects are not captured for long enough in the same position to get the desired effect. What might work best is to stack images. You could capture shorter frames of the cars moving, maybe 1/15th of a second for example, multiple times, then combine those images in post production to form a pleasing result. This might require many frames as well as experimentation of how long the shutter speed is. We have some previous questions that might help you with image stacking knowledge as well:

You might also be interested in another way to capture timelapses without using such a narrow aperture. See: What are neutral density filters and how do I use them to create long exposures in daylight?

for this reason long exposures of motion tend to look very washy and unimpressive.

The solution I came up with was to shoot a large number of short exposures and produce two image stacks in Photoshop. For the first I set the blending mode to lighter colour and one with the blending mode set to darker colour.

You can either do a simple average of the light and dark image, or if that doesn't look good you might have to selectively blend them together.

An ND filter can help you take longer exposures during daylight. This is what people use when photographing things like those blurred shots of running water.

An ND filter is like sunglasses for your camera - its only effect is to reduce the amount of light entering the lens, allowing you to take longer exposures with the same aperture, or widen up the aperture with the same shutter speed.

You can get ND filters that reduce the light by 1 stop, 2 stops, etc up to 10 stops. Sometimes they are marketed according to the reduction factor, so 2x means one stop, 4x means two stops, up to 1000x which is, more or less, 10 stops.

Such extreme ND filters are not as useful for everyday use as, say, a 3-stop filter, but can be useful in niche situations like this.

Echoing Matt Grum's answer about stacking / compositing, Mike Kelley made a series of superb images of planes taking off over the course of a day, from several different airports, called Airportraits. These images convey the sense of airline traffic over the course of a day, without a hint of blur in the subject(s) (there is some motion blur in some of the backgrounds, such as cars on the highway in Germany, but the cars are not the subject of the image).

Mike recently (late 2016) posted a blog post about the making of Airportraits. There is an embedded YouTube video of his travels and capturing the thousands of aircraft to create the series. Well worth the watch and read.

3
how can I determine the proper exposure for insanely long exposures
3
Why use UniWB? Doesn't apparent clipping of "final" colors matter more than actual clipping of RAW sensor values?
3
How to maximise the impact of car headlight trails in long exposure
1
Where do we focus when shooting cars in a street?
1
Nikon D5200 overexposed shots in "auto" modes
1
How does the image form during a long exposure?