What's causing the “seeing double” lens ghosting in my photos? 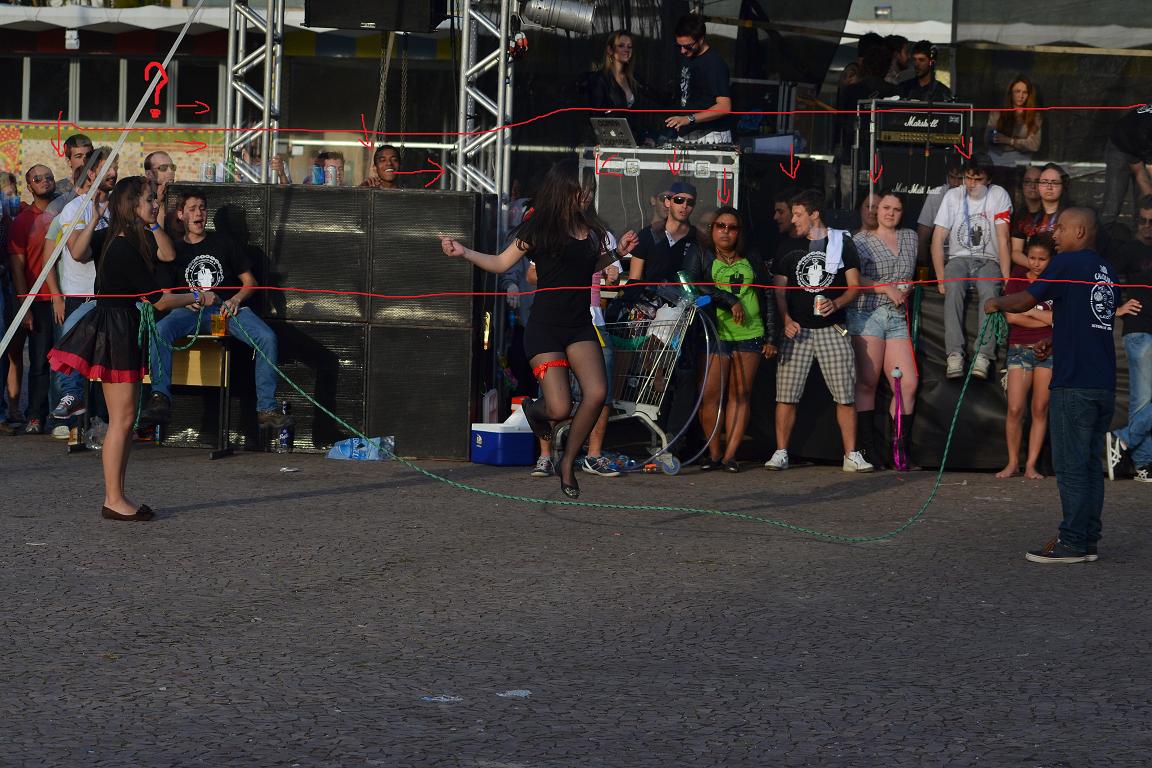 You can see the ghosts happen only by those red lines I've drawn, for example that metal structure is ghosting just under that area.

Can someone explain me what is this? I didn't even know what to google for!

From what you show, there could be a few assignable causes and a couple of contributing factors.

It does not look like a lens-based artifact due to the horizontal zone where the ghost appears. It appears to have a rather definite, but not sharp, cut-off. The areas affected are detailed which rules out haze or flare. They are not reversed so they are not reflections, etc.

I do not know the camera model but I think the shutter must travel vertically, given the limited vertical extent of the affected area.

It does not appear to be shutter bounce which appears in older cameras with heavier shutter curtains near the edges of the image.

That points to shutter speed timing but not a malfunction, per se.

Lighting: Outdoor gas discharge lights (Argon, Sodium, Neon, others?) are not continuous and pulse in sync with alternating current. In North America it's 60 CPS and in Europe 50 CPS. The ghost could be the overlapping of a second source while the shutter slit was traversing the sensor. Given the difference between the primary and ghost, a second source is a plausible explanation.

This is a wild guess, but without any additional information regarding the shooting conditions, equipment used, and camera settings there isn't a lot here to go on.

If there was a flat filter mounted on your lens, then a reflection off another element in your camera's lens may have bounced off the back of the filter. What might have caused the ghosting during the precise time the gap in the shutter curtains was over the specific area of the camera's sensor is a fairly weak flash from the camera of another photographer taking a photo of the same scene or some other source of off axis light that caused the lens/filter to create additional reflection for a precise instant.

What I see is that in the middle third of the photo, the entire image is duplicated a bit to the left of the main image.

I don't think this can be caused by any sort of lighting issue, because new light sources can't cause something to shift sideways (unless we're talking about two flash bulbs firing while the camera or subject is in motion, and even if that happened, the effect would not be limited to a horizontal band). Similarly any internal reflection inside the lens should exist for the entire duration of the shutter's motion, not just part of it.

If this effect were over the entire image, I would guess that you held the shutter button halfway down a little too long before taking the shot, and then shifted just far enough that the IS mechanism hit the end of its range and recentered itself during the shot.

If you are in a mode that shoots repeatedly, and if your camera has multiple speeds, slowing it down might change the behavior. Worth a try. Either way, I'm pretty sure you'll need to send the camera in for repairs. It likely either needs some sort of shutter adjustment/lubrication or a new shutter.

Not the answer you're looking for? Browse other questions tagged troubleshooting artifacts ghosting or ask your own question.