Does Canon 450D (Rebel XSi) have TTL ratio control over the menu?

There is "External flash control" section in the camera's menu. However it is not accessible if you have no external TTL flash on hand.

How can I find out is there ability to change the output power or ratio for different groups of flashes (A, B, C) remotely via camera menu?

Page 117 of the XSi's manual says that the settings available are dependent on the flash and indicates to look at the documentation for the flash.

Generally speaking, the settings you are talking about can be controlled from the camera menus when using flashes that support them, but check the documentation of the flash you intend to use first.

In order for the 450D to control a flash via E-TTL, an E-TTL compatible flash or transmitter needs to be physically connected to the hot shoe either directly or via an off-shoe cable or external wireless trigger that is E-TTL compatible. Until the recent release of the 600EX-RT the Canon wireless system was an optically controlled one that uses pre-flashes to meter and communicate with any off camera flashes. A few recent bodies with built-in flash (beginning with the 7D) can control off-camera slave flashes optically using the built-in flash. Earlier Canon bodies with built-in flash, such as your 450D, do not have this feature. The only option for radio control of a Canon flash was to use a third party wireless trigger system that is E-TTL compatible and allows communication in both directions between the camera and flash unit. For optical control either a 'Master Capable Flash' or 'Master Transmitter' must be used with the 450D. The 600EX-RT now has radio, as well as optical, capability when paired with another 600EX-RT or when using an ST-E3-RT radio transmitter mounted on the hot shoe. The older ST-E2 wireless transmitter is only capable of optical control.

Beyond that, what functions your camera can control are dependent upon the capabilities of the connected E-TTL flash unit. Since your EOS 450D/Rebel XSi is a Type-A camera that can use all the features of EX-series Speedlites, it supports any camera controllable E-TTL feature if the attached flash is capable of that feature (See ppg. 117, 166-67 of the EOS 450D/Rebel XSi user manual). If the external flash is capable of manual output power then power output will be controllable via your camera's menu. If the flash is not capable of manual adjustment, then that function will not be available to you in the camera's menu.

If the flashes are capable of being used in groups and ratios, then your camera can control them via the menu. With multiple flashes, a 'Master Capable Flash' such as the 580EX II or "Master Transmitter" such as the ST-E2 must be connected via the hot shoe (directly, cable, or wireless trigger). The others may be either 'Master' or 'Slave Only' capable.

Here is a chart that outlines how the optical control process works. 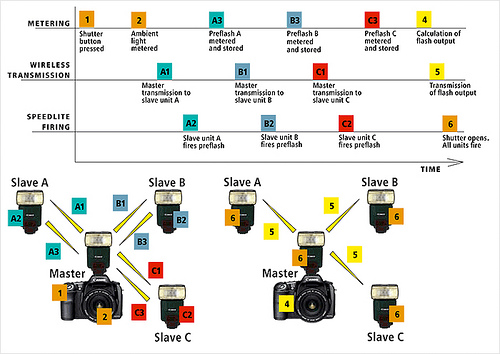 Without an eTTL-II capable flash, as you've noticed, it's hard to tell, since that menu selection remains grayed out. But, basically, it depends upon the flash, and whether or not it can communicate via the camera menu.

In terms of Canon's speedlites, the following models can be controlled via the camera menu:

Earlier models, like the 580EX, 550EX, and 430EX cannot be controlled through the camera menu, and that selection in the camera remains grayed.

There are also a number of 3rd party flashes that can be controlled via the camera menu, and the first way to find out whether or not is to look at reviews and specs of the flash. This feature may not be listed in the specs, however, so you may also need to go on a google search for user reports; "menu control" is a good phrase to search on along with the flash model name, and the PoTN forum, which is Canon-centric, has a bunch of flash gurus who could probably tell you definitively.

One additional note. A number of cheaper radio triggers (e.g., YN-622C, Phottix Odin, Pixel King, etc.) are now hitting the market that allow for TTL communication over radio, and they can take advantage of the menu control protocol to give you remote ability to change flash settings via the camera menu. This feature now has a lot more convenience than simply keeping you from having to remember custom function codes, or having to use the flash LCD menus.

The 450D does not have a built in wireless flash controller - also, even if you had a flash controller all the controlled flashes need to be compatible ETTL flashes - so, if you don't have an all-ETTL setup this is basically not relevant for you.

To remotely control flash power from the camera menu you need:

I listed only Canon original models, you can find cheaper 3rd party alternatives of varying quality and compatibility

I also didn't list flash units designed for the EOS-M system simply because I don't know much about them.

Not the answer you're looking for? Browse other questions tagged canon flash remote canon-450d ttl or ask your own question.

13
What was my flash power?
1
Is a TTL wireless flash trigger something meaningless?
1
Remote flash triggering options for Canon 6D
4
Are there any guidelines on how to prevent the flash from overpowering the scene?
4
How do I stack different brand flash controllers on my Canon 5D Mark III and still have full TTL and power control?
2
Canon ST-E2: Can I manually adjust the power of slave flashes using the camera menu?
1
Will the Phottix Odins for Sony give me remote power control over a LumoPro LP180?
1
The combination of transmitters to fire AND control Canon 430EX III-RT and Yongnuo YN-560 IV
1
How does the built-in external off-camera flash control work with the Canon EOS M6?
1
How to disable balanced-fill with Z7 i-TTL & SB-300