What's the difference between Canon's two Portrait (and Landscape) settings?

On my Canon EOS 700D, I have a couple of possibilities for portraits (ditto landscapes etc.):

Apart from the preference for large aperture, is there any difference in the processing here? Is the dial mode just using the portrait picture style on its default settings?

OK, here's a test shot. I did it using landscape mode / landscape picture style because a standard subject was a lot easier to find.

Note that the Manual mode photo was taken ~20s after the first, but not much happened weather/lighting wise, even though the latter looks under exposed compared to the first.

The greens are about the same, but the blues are way off. I've repeated this a couple of times - it's alwasy the blues that are different. So the 'basic' landscape mode is NOT the same as the default 'landscape picture style' available in the 'creative' modes. 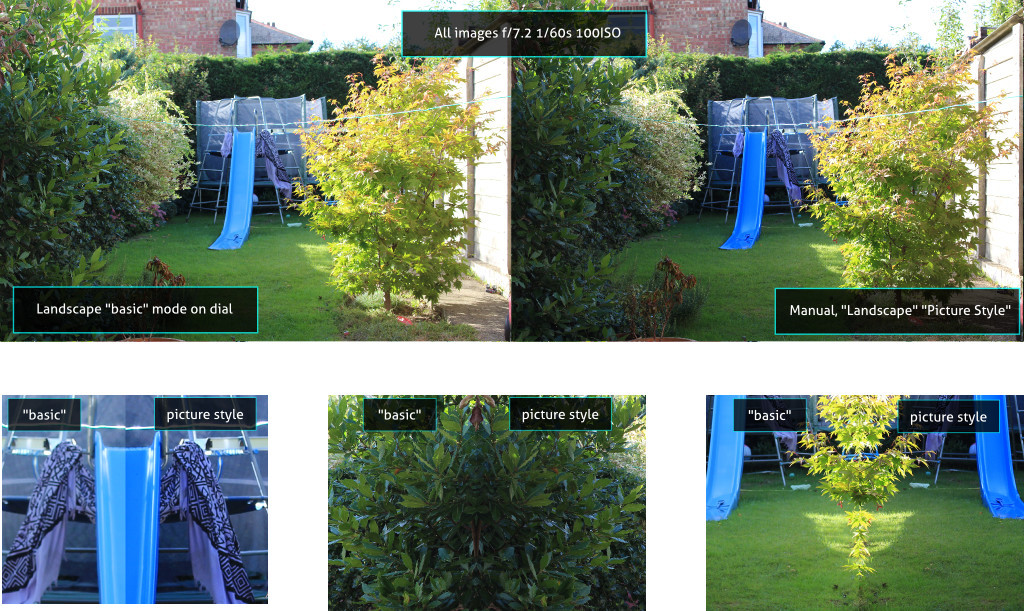 I must admit, at the moment I can't really be bothered with either of these "features" as to understand what they're likely to do to a photo I'd have to do an enormous trial and study and commit to memory effort, and that effort is better put in to processing raw images. But if anyone can answer specifically about these I'm still very interested in an answer.

Kids in front of TV, pretty much a controlled scene! I can also confirm that Portrait Basic Mode is quite different to Creative mode with Portrait Picture Style. The latter goes mad for the reds, lifting them out of shadows and generally looking quite lurid when they appear on clothes. So far, the "picture style" approach seems to introduce some pretty heavy handed colour tweaks whereas the "basic" modes are much more subtle.

The first key to understand here is the difference between "Basic" zone and "Creative" zone. In the case of Basic zone, the camera is expecting that the photographer has little to no knowledge of photography. It takes over almost all features of the camera and adjusts based on the intent of the user (as set by the given mode).

While I don't know exactly what the basic mode does (I never use it), it most likely does things such as locking the aperture full open (to ensure the smallest depth of field and most background blur) and probably applies the Portrait profile since it specifically mentions altering skin tones (which is a processing step). The Basic modes I have seen almost always simply consist of presets that can be achieved using the "Creative modes" so while I can't guarantee it, it sounds accurate based on the little description the manual gives.

"Creative zone" on the other hand, is the "advanced" shooting mode, or as I like to call it, the non-point and shoot mode. This mode assumes that you have at least a basic understanding of photographic principles, such as metering and the exposure triangle and its elements. It allows the photographer to take control of all the features of the camera. There is often still an automatic mode in this zone where the camera will adjust for exposure based on an exposure compensation, but more features of the camera are still enabled to tweak.

In this zone, aperture is at the control of the user, as is the picture style, so a "Portrait mode" isn't possible, however setting the camera to Av (aperture priority) and locking it at wide open and setting the Portrait image processing preset should give similar color tone and depth of field to what the Portrait mode in the Basic zone did. Also note this only applies to taking JPEG images, not RAW shots (though the preview image for the RAW will be affected.) The image presets are simply adjustments for contrast, sharpness and saturation that the image processing follows when creating a JPEG from the raw image data.

Certainly the best bet to prove there aren't other changes is to setup a controlled test, with consistent lighting, consistent subject and a tripod and try both settings and see if there is a noticeable difference, however I highly doubt there will be anything seriously significant.

This is easy to test:

Here are (as promised) the results from my 550D, I took 3 photos of my of my kid's toys - a stuffed animal that is sort of skin tone-is in color (couldn't get anyone to pose for me).

I fully expected the portrait mode and portrait picture style pictures to be the same - but as @artfulrobot discovered when he did it with the 700D the result are different.

Not extremely different but the portrait mode seems to be in the middle between the portrait and the standard picture style, even closer to standard. 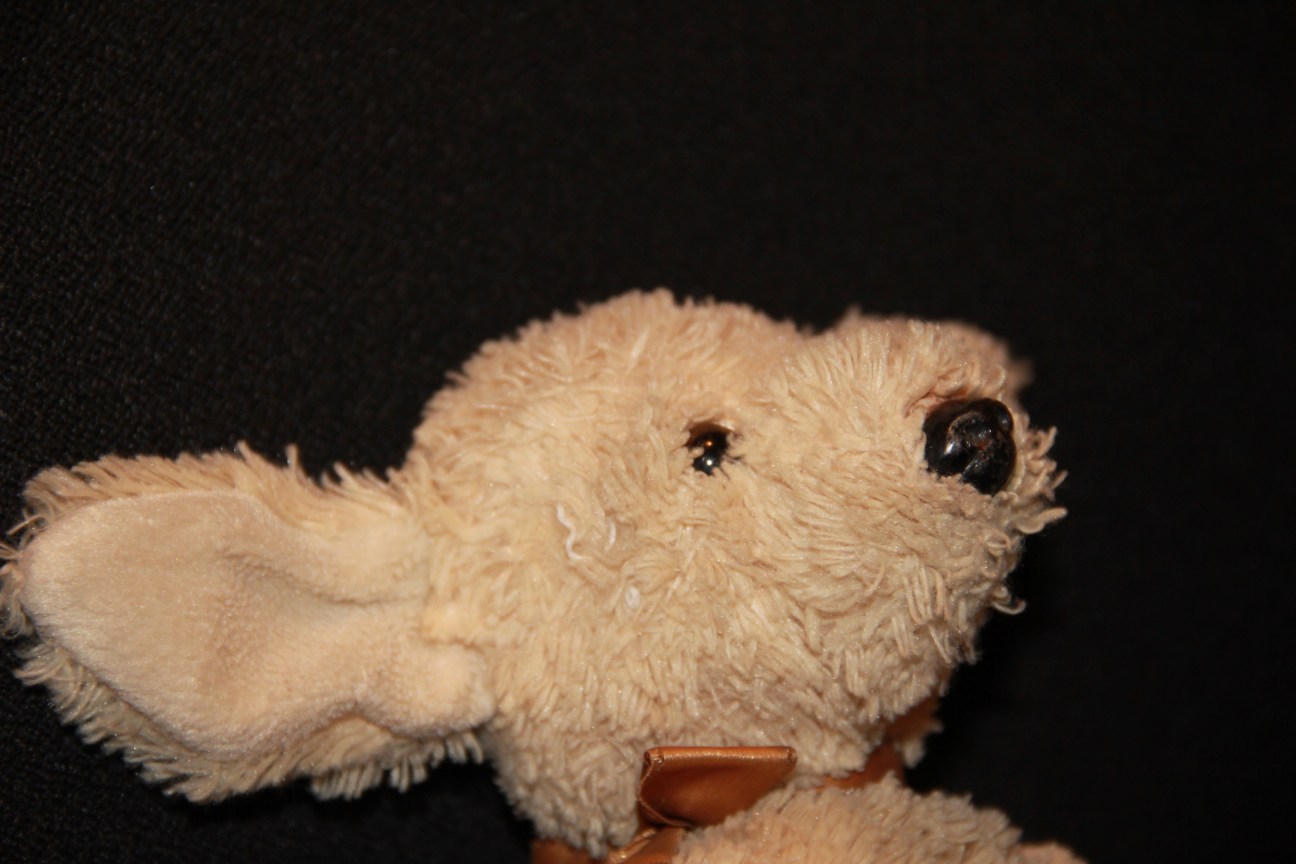 Same part from all image for easy comparison: 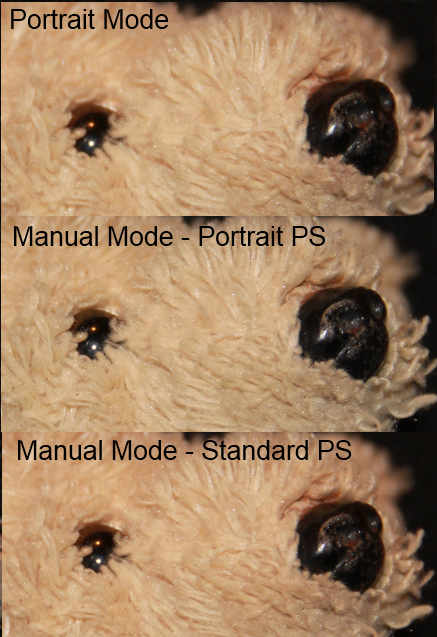 Not the answer you're looking for? Browse other questions tagged canon canon-700d or ask your own question.