How to focus/properly use Olympus 40-150mm f4.0-5.6R lens with Olympus E-PL2? When I use it sometimes I get decent photos but mostly they are blurry, low image quality. I get much better photos when I use kit Olympus 14-42mm lens or Sigma 19mm EX DN. Maybe it's defective?

The culprit is most likely the longer shutter speeds needed to get the same exposure with the slower f/4-5.6 lens. At the same time, the longer focal length requires shorter shutter speeds to prevent blur from the same amount of camera movement. Because the angle of view is narrower with a longer focal length, the same amount of camera movement by the camera will result in more blur since each unit of angular movement will shift the image of the subject projected on the sensor by a higher portion of the entire width/height of the sensor.

To get good handheld results with longer focal lengths you must use faster (shorter) shutter speeds than you need to get the same results with wider focal length lenses. Using good camera stabilization techniques are also required. Holding the camera up to your eye and using an optional electronic viewfinder will be more stable than trying to compose photos by viewing the camera's LCD screen while holding the camera in the 'dirty diaper' stance (pictured below). 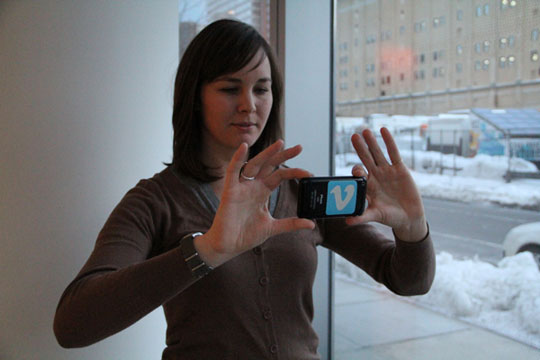 Since longer lenses are often slower, which means their f-number is higher because the aperture as a ratio of the focal length is smaller, this means increasing the sensitivity, or ISO to allow the shutter speeds you need without underexposing the shot. But increasing the ISO in order to reduce the shutter speed also results in increased image noise because the ratio of the signal created by the light hitting the sensor compared to the noise generated by the camera is lower.

If your subject is not moving, placing the camera in a stable position, such as mounted on a tripod, will allow you to use longer shutter speeds without camera movement causing your picture to come out blurry. Even when your subject is moving at moderate speeds, if the entire picture is blurry then you would benefit from mounting your camera on a tripod or other stable mount. If the background does not exhibit motion blur and your subject does, then only a faster shutter speed will reduce the blur caused by the subject's motion.

Not the answer you're looking for? Browse other questions tagged lens olympus or ask your own question.

6
Is “slow” focusing/shutter release normal on a “fast” lens?
4
Should I get the prime or zoom kit lens with the Panasonic GF3?
5
From a pure specs perspective, do micro four thirds cameras like the E-PL2 have any advantages over Sony's new RX100?
3
How useful is in-lens image stabilisation at long zoom lengths on micro 4/3?
4
Should I replace the Canon 18-55mm f/3.5-5.6 kit lens with a 40mm f/2.8 or 50mm f/1.4?
7
How do you judge the build quality of a lens?
2
Can I transform my manual focus lens into an autofocus lens?
4
Do old manual focus prime lenses give better image quality than new kit lenses?
0
Is the Nikon AF-S NIKKOR 18-35mm f/3.5-4.5G ED Lens good for portrait, landscape and general use?