How to remove objects from photo

I have recently been to a wedding and I would like to make a unique gift to the fresh married couple!

I thought of giving them some artistic photos. I am not a professional photographer (I just have a compact digital camera) and I have basic knowledge of Photoshop and gimp.

There are two photos I would like to edit a bit... What I would like to do is remove the cars and people behind the bride's car (it's the Fiat 500 on the front) and remove the flowers from the Subaru Impreza. Any idea or advice or reference on how to do that?

The pictures are the following 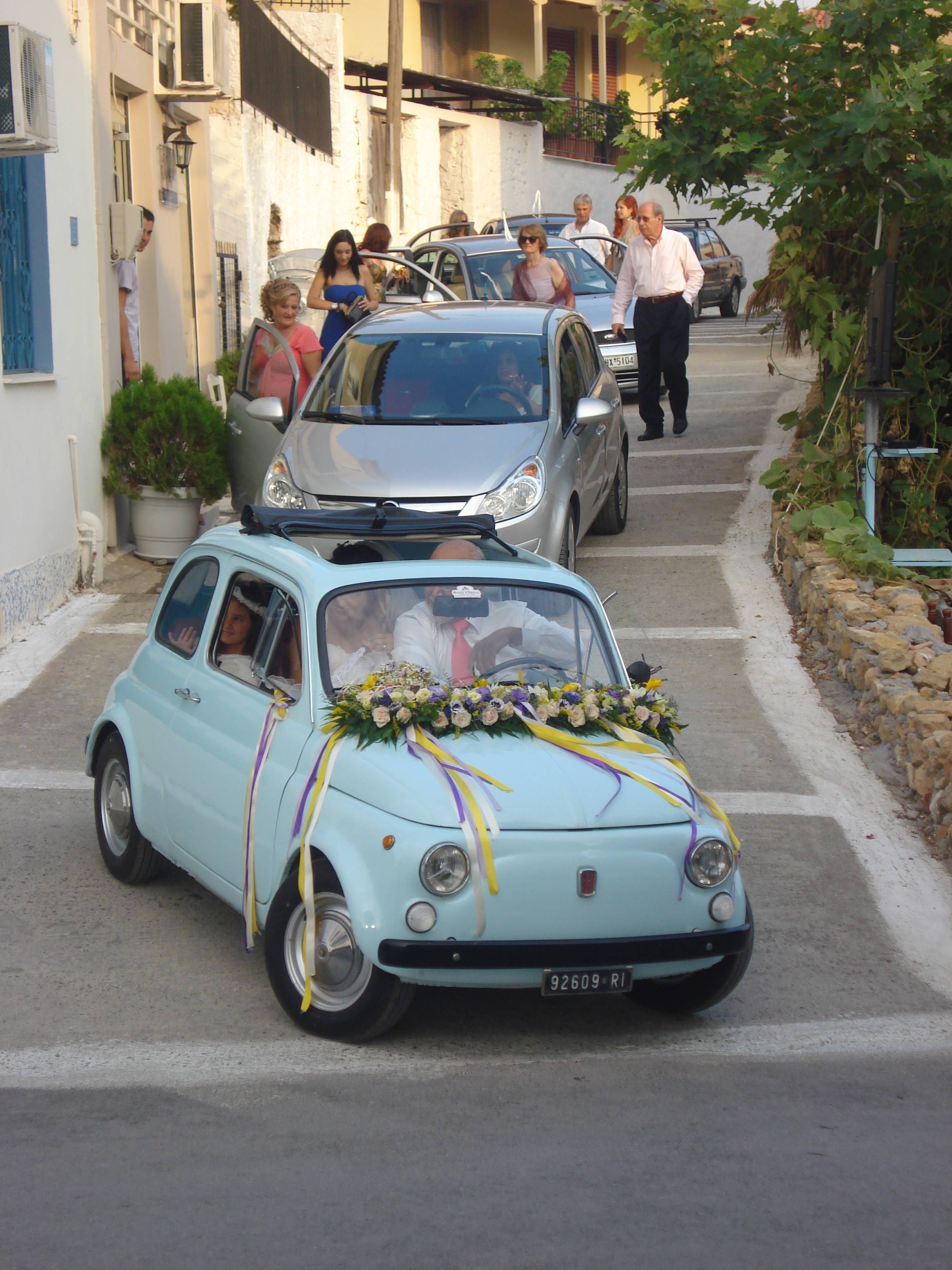 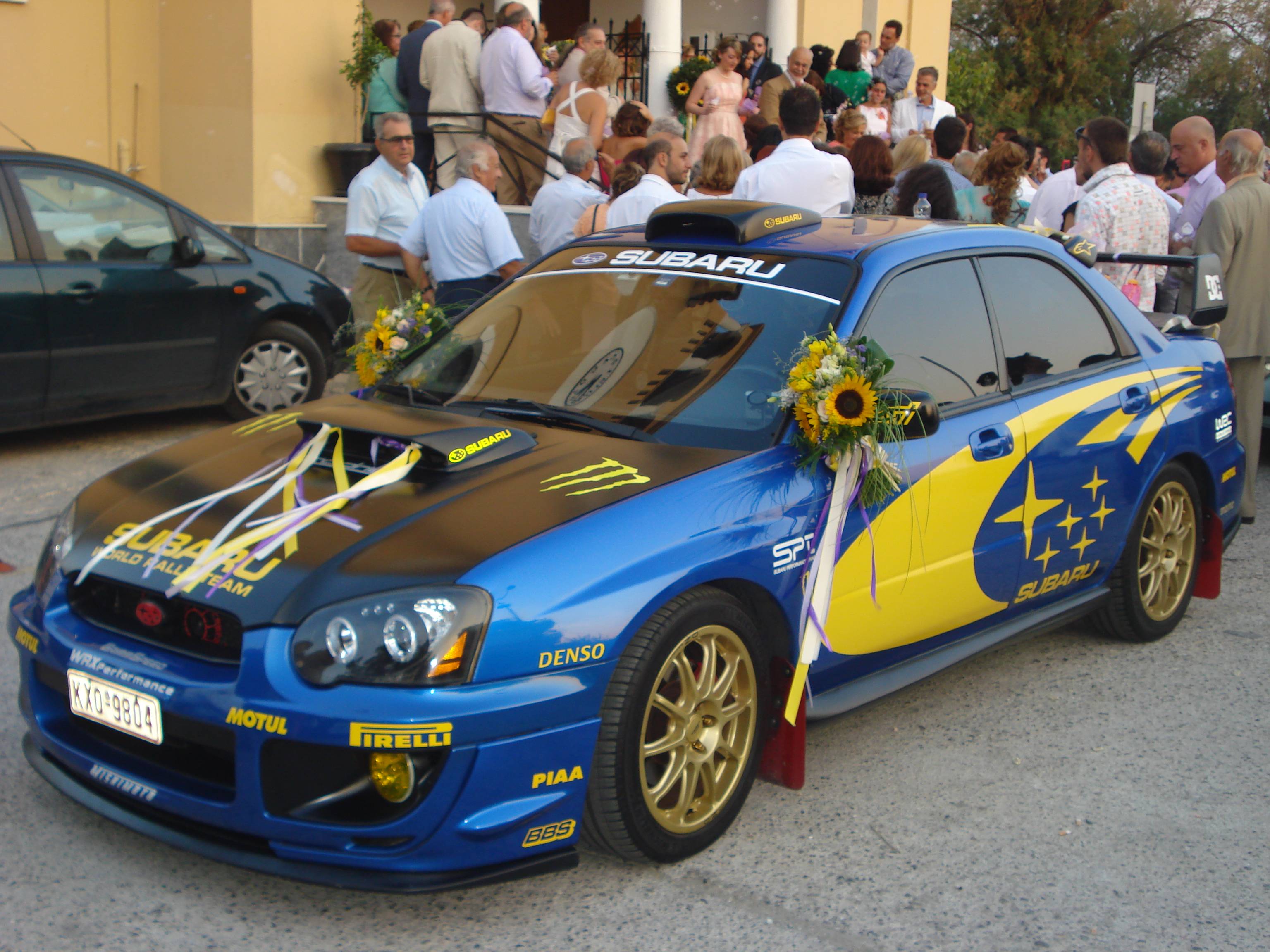 For the first image you would like to remove four cars and eight people. I see two issues with trying to do that.

Did you perhaps shoot the scene twice, once with these subjects in them and once without? If you have a reference image without any of the cars, then this task becomes viable. Without a reference image in the same lighting with the same scene, this task would be out of the reach of most people's image manipulation abilities.

The second image that you would like to remove flowers from a car is probably more achievable, but it still will be a challenge.

Overall these types of skills are best left to professionals with a great deal of experience. If you simply have a photo with someone blinking and you want to fix that, I would say that is within the scope of a Q&A site like this. These are both quite advanced photo manipulation techniques and I'm afraid the steps are very involved.

The option I would suggest is sending both images off to a professional and have them try to achieve this for you. I have used retouchup.com and they would likely attempt what you desire for $10USD per image. I'm not sure that they would actually do as you are asking since it seems quite involved, but it is worth trying.

If you do want to try this yourself, we have two questions that go over the basics of object removal in images:

After thinking about this a bit more, I have a final option that you may have not considered. If you don't have any reference image to clone with, and your skills are not at the top end of the image manipulation scale(I don't consider mine to be), you can try adding in some type of blur or simulated bokeh. This will bring the focus to the car and somewhat remove the distraction of the other cars and people. We have a previous question that details good examples of how to achieve this on your own, here: Can I achieve synthetic bokeh? . I hope you don't mind but I took your image and used onOne FocalPoint 2 to simulate bokeh on the first image. Here are the results: 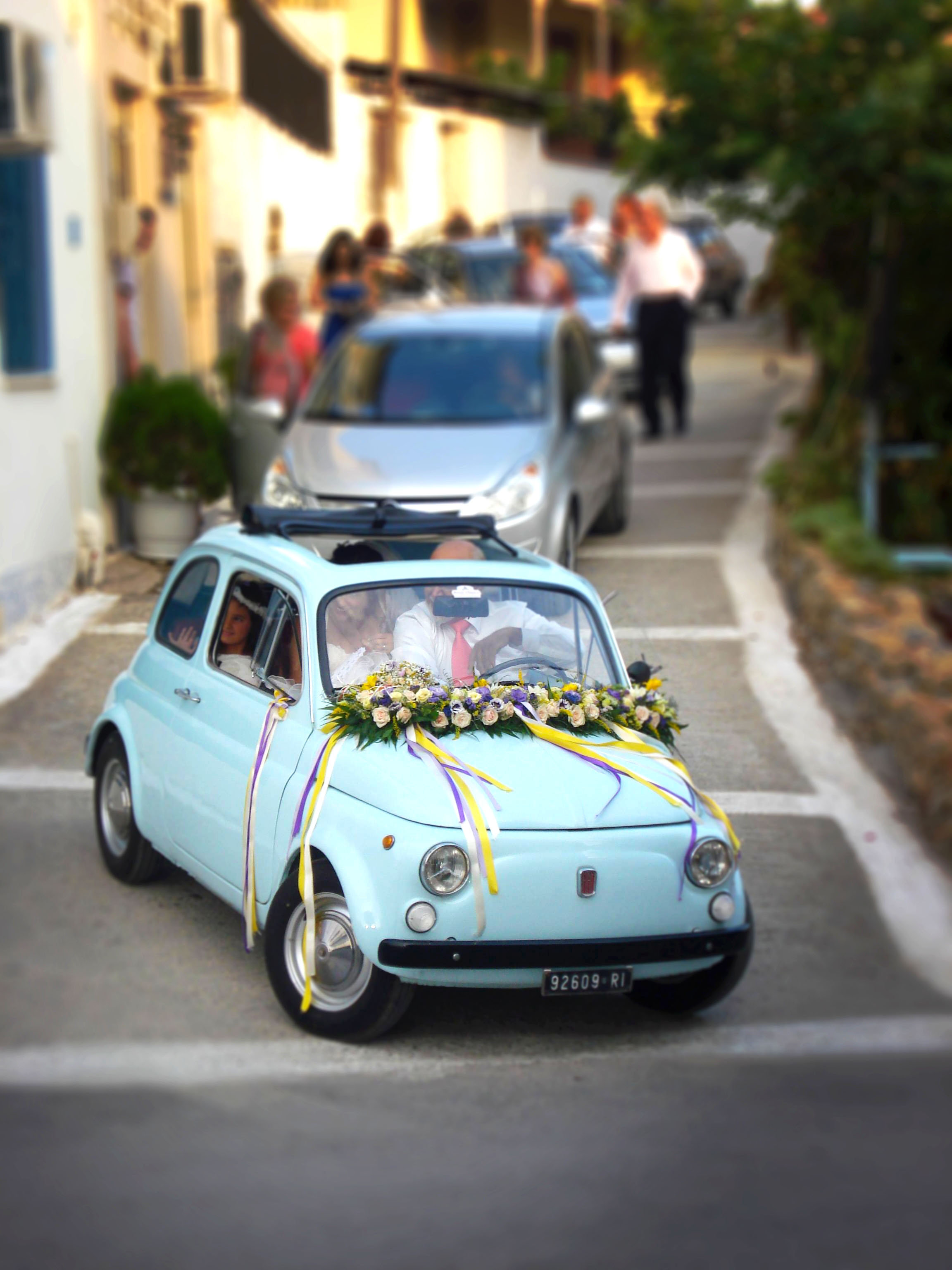 For the first image, you may have better luck removing the car from the image and placing it on a separate background plate. If you can revisit the site and get a photo under similar lighting and direction without the cars and people present, you could use that to keep the same location. As it is, the cars and people are going to be noticeable if removed because there simply isn't enough image data to create a realistic back-plate that doesn't show the alteration.

For the second, it's a bit trickier. Glass in particular is hard to Photoshop since you have to worry about whatever is behind it as well. You would have to try and air-brush with the clone tool or spot healing tools to remove it, but it's going to be tricky to make a believable background where the inside of the car doesn't look altered underneath where the flowers are.

I would classify both projects on the higher side of advanced. If you can get a new background plate for the first, it is pretty easy, the difficulty is in getting the light and angle correct so that the background and foreground blend well and then adding in the shadows. The second would be pushing it and I'm not even sure I could do it (certainly not without getting a pressure sensitive digitizer tablet) at my current level of skill and I consider myself pretty good with Photoshop and image manipulation in general. It would also certainly be very time consuming. To do it right, you'd have to project out what things like the text on the hood should look like and where the lines of the body parts should be and then fill based on those lines. (Put the lines on another foreground layer and paint up to them.) I'd expect to spend at least a couple hours at my skill level to get what I would consider a decent quality touch up job on the second photo. (Granted, if your standards are lower than mine it might take less.)

There is a simple solution for the first photo. Crop the image to show only that Fiat and only a little from above and in front of it. There will still be some work left in removing what is showing of the next car right behind the Fiat, but that task should be a lot easier than removing them all from the full sized photo. Besides, horizontal orientation might look just good for this.

Is the road in front of the Fiat already edited to remove something there was in original photo? And it then is a sample of your editing skills? Just asking, for it looks a bit odd.

The second image is well covered in the other answers, I have nothing to add.

Just as we can replace a dreary sky with a nice blue sky with clouds in Photoshop, we can change the background of just about anything in a photo as long as we know how to properly select an image in a photo. There are many tutorials on line that show how to do this, depending on the software you use.

If this were me, considering how cute the car is, I might select and remove the background entirely and then replace the background with something unusual. It is certainly easier than trying to fiddle with the actual location since it is so cluttered with people and cars.

Depending on their personalities, I might put them in an unusual place like a theme park or on a tropical beach. They all seem to be looking to their right at something so I might put an unusual and interesting object for them to look at.

In about 15 min I cut out the car, put it in a blue sky with white fluffy clouds above green rolling hills and then attached a realistic hot air balloon to the top of the car. I rotated the car just a little so it appears that they are looking at something on the ground. Maybe too cute for some people, but certainly fun to look at.

Since you aren't a professional the best skill you can apply is your creativity and make it a fun photo for them to display. Gifts like this from the heart are always appreciated and sometimes are the most memorable. I have made my Christmas cards like this for many years and I get many requests for them. Good luck

Not the answer you're looking for? Browse other questions tagged photo-editing object-removal or ask your own question.

20
How do I blend multiple photos to remove random people from the background?
8
Can I achieve synthetic bokeh?
4
What is the most effective Photoshop technique to remove people from photos?

10
How to remove markings from black and white photo?
2
How can I remove the hair on the sensor from this picture?
2
Remove the tourists from photos
1
How do I standardize white-balancing in Lightroom without using auto?
2
Photoshop. How to remove the the spotlight
2
How to properly remove an object that stick out above horizon using Photoshop?
3
How do you remove netting from the pictures?
8
How can I automatically digitally remove shifting sensor dust speckles from a large series of photos?
4
Remove brushed aluminum texture from photo