Difference between D&G shoot vs Other professional shoot

NOTE: I can't post more than 2 links since I don't have at least 10 reputation hence some links need to be copied and pasted.

I asked a photographer to do a fashion shoot for some garments and I asked him to achieve the look and feel of the following Dolce & Gabbana photo shoot:

He agreed and said that he could achieve the look no problem.

I just received the low-res pictures from him (hi-res CD is being shipped to me after I pay the other half of the shoot). I'm not really satisfied with the results.

Here's an example picture of the D&G collection: https://dl.dropboxusercontent.com/u/13398409/dolce-and-gabbana-fw-2014-women-collection-82.jpg

And here is a similar outfit I got photographed: https://dl.dropboxusercontent.com/u/13398409/nk_original_123.jpg

You can clearly see the difference.

Without knowing for sure of course, but it looks like the D&G shoot used at least a large soft box to the upper left of frame. I say large because the shadows are fairly soft and there is a lot of fairly even lighting on the subjects. The photos you received look to be set up the same, only with a smaller light source. You can observe this by noting the harder edges of the shadows.

A good example of the difference can be found here: 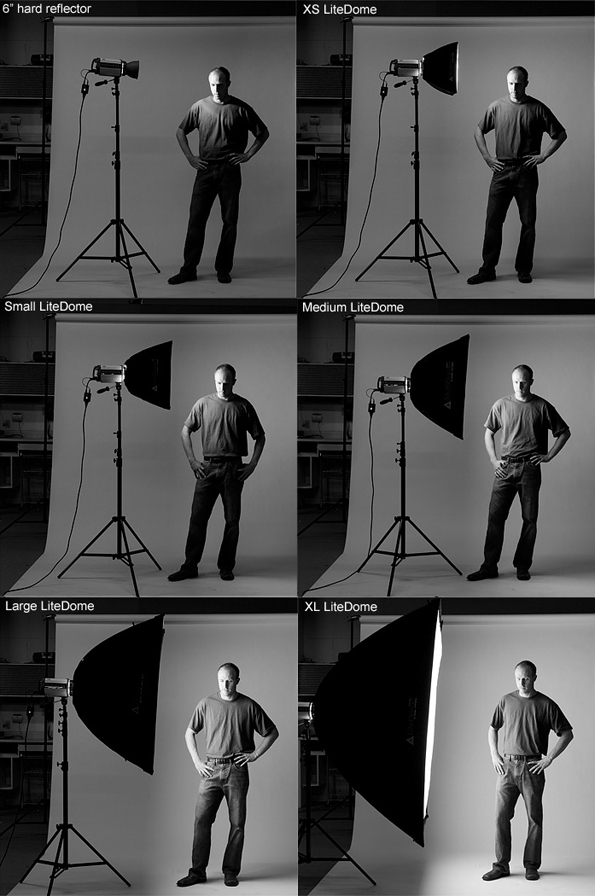 Note the hard shadows on the subject's face. Unfortunately they were lighting the head instead of the entire subject, so you don't get much down angle light, but the concept should be perceptible.

Here is another example that might help, only it is illustrated against a glass subject:

In summary, if the lighting is your issue (and the most noteworthy from what I see), then post production isn't going to be much help for you.

The lighting does appear to be a large portion of the difference, though the model's positioning is also part of it. The shadows are mostly downward and run across the image in the D&G shots where as the first sample has the light going much more directionally backward which produces a rather harsh and unpleasant shadow.

If that shadow is what you don't like (it's the main problem with the image that I see) then that isn't going away. It also matters to make sure that the model posses such that they extend the curve created by the shadow and the dress. You can see that in the D&G how the shadow goes along the ground then blends in to the dress which goes up the leg and then up the person.

In the outfit that you had photographed, the model is leaning in to the shadow creating a harsh, acute angle. Also, since it isn't a full length dress that goes to the floor, the overall look of the image may not work well in general since the shadow is going to break up in between the gap where the feet are, but it might be possible to work around that some by altering the angle of the shot, but it is more of a departure from the specific look of the D&G shot.

Based on the fact he went portrait instead of landscape, I'd guess he does not have a particularly large studio either, so he may not be able to address the issue with the shadow very well if that is the case, but I'd still think it should be able to be closer than it is. That said, it is also arguable that he replicated the look close enough that you might not have a case for going after him to get your money back either. He can make a valid argument that the garment itself isn't compatible with the exact look.

Not the answer you're looking for? Browse other questions tagged professional fashion or ask your own question.

18
Pros and cons of cheap studio strobes vs. hotshoe/speedlight flash for portraits?