How can I capture earthshine?

I am preparing for a photowalk with the purpose of catching earthshine (the part of the moon unlit by the sun but slightly glowing/visible because it catches some sunlight reflected by the earth). I hear the crescent phase gives best chances, and the moon just entered the first quarter. What settings should I use? More general advice will be also appreciated (e.g. when to catch it, how the position of the sun with respect to the moon affects it, and any other experience you guys have with earthshine).

The best time to shoot Earthshine is when the Moon is practically new, because the illuminated portion of the Moon's arc must be completely and utterly blown out in order to capture detail in the part of the Moon not illuminated by the Sun.

You will need to use a tripod and cable release. Mirror lock up may not be a necessity depending on your shutter speeds. If they are longer than 1-2 seconds mirror vibration won't be enough of an issue to require it. Use the longest focal length lens you have available. 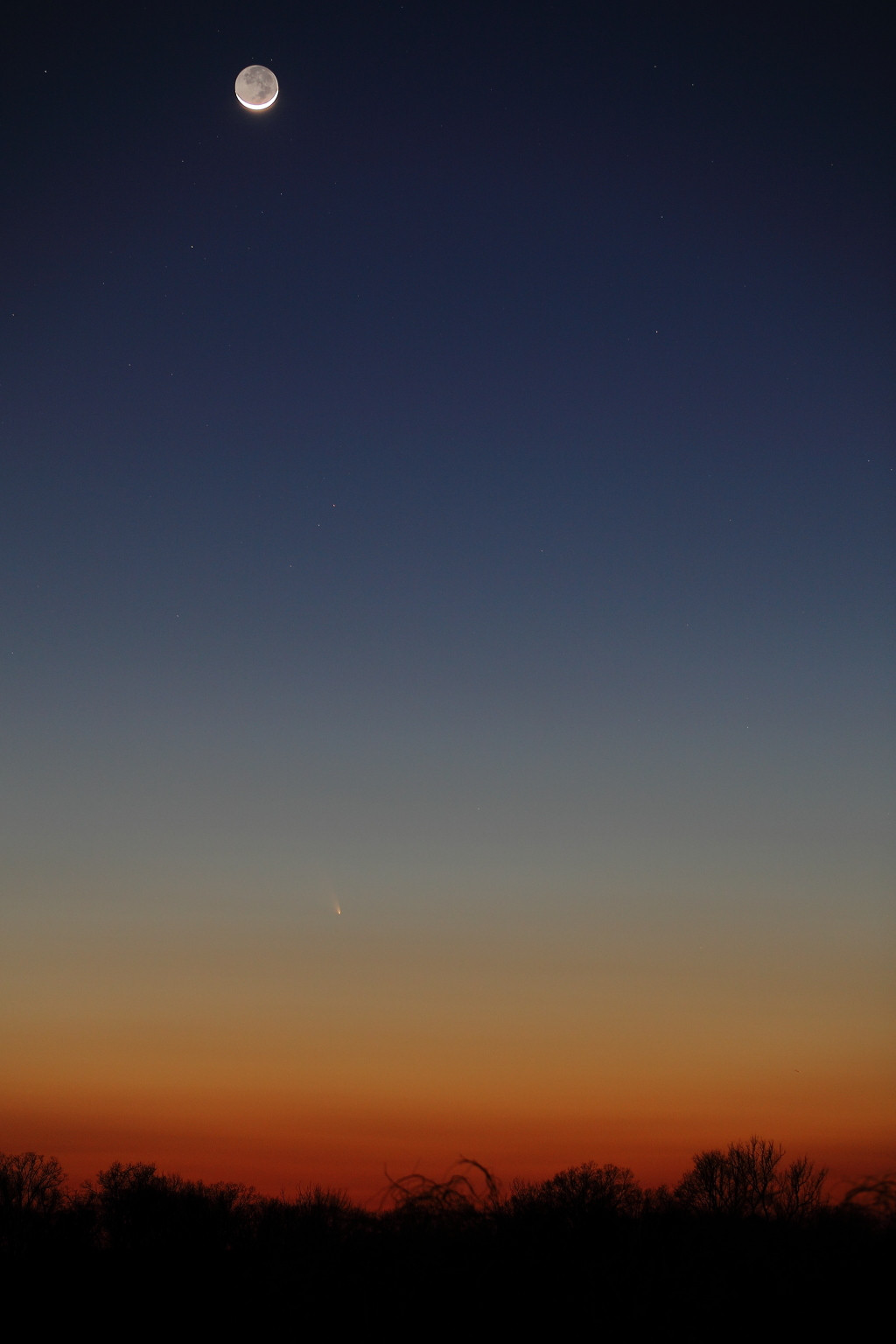 The moon five minutes later. Same camera/lens. 5 2/3 stops less exposure: ISO 100, 200mm (heavy crop), f/4 for 1/2 second. Exposure pushed +2 in post. As you can clearly see, you can not get details from both sides of the terminator on the Moon using the same exposure settings. The directly illuminated limb of the Moon is blown, yet the Earthshine illuminated part of the Moon is still fairly dark. I normally shoot the moon at ISO 200, f/5.6, 1/125th second to properly expose the illuminated part. That is six stops darker than this exposure and 11 2/3 stops darker than the first image! I do usually also shoot the Moon when it is higher in the sky which means less of its light is absorbed by the atmosphere. 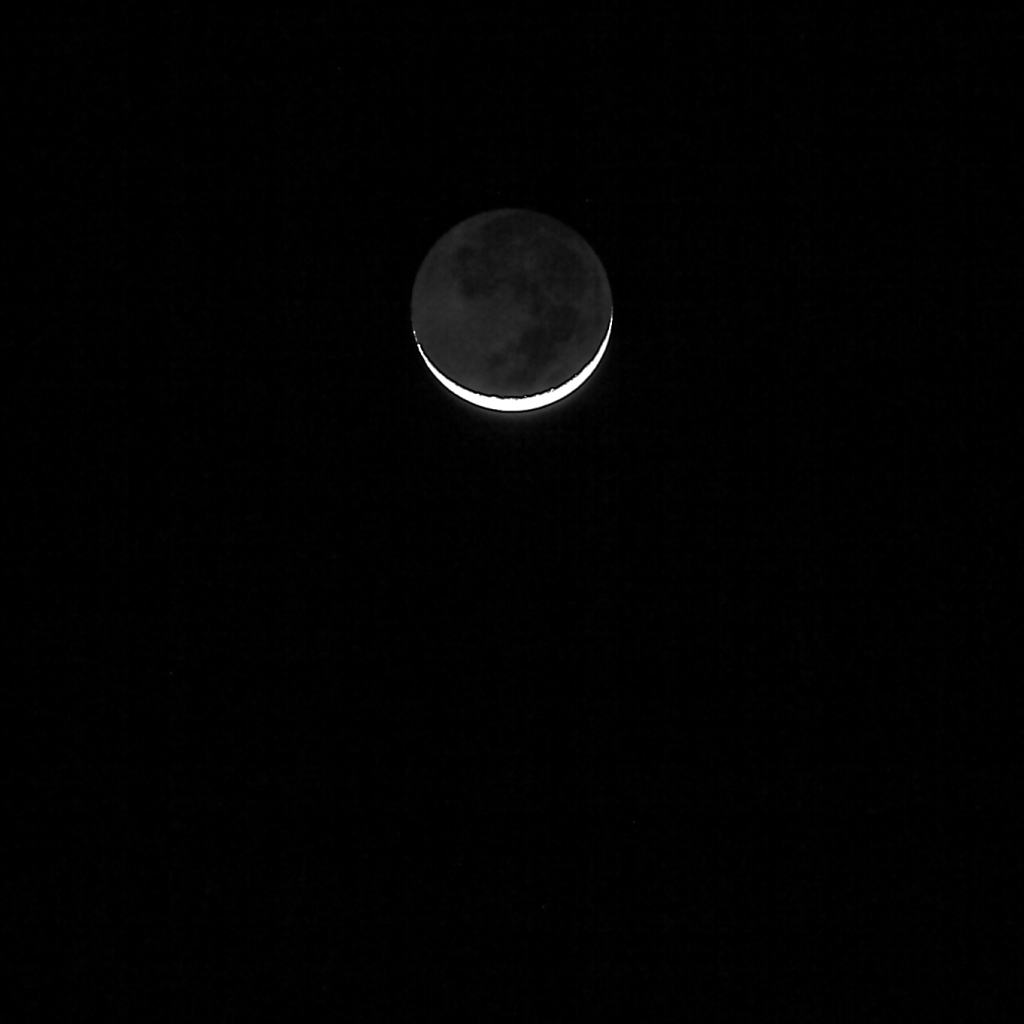 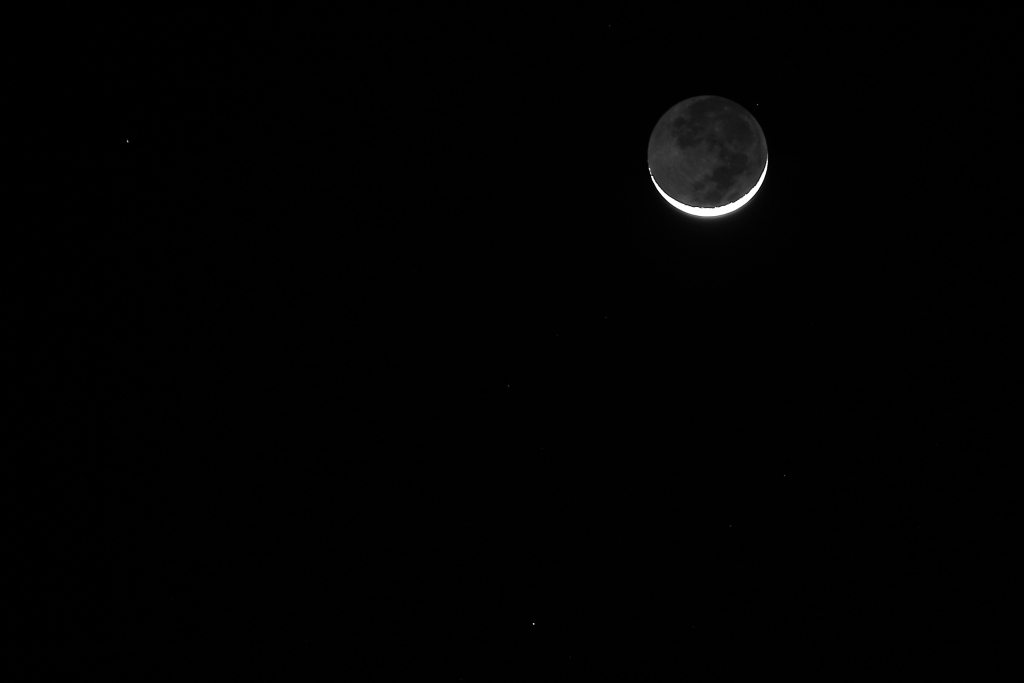 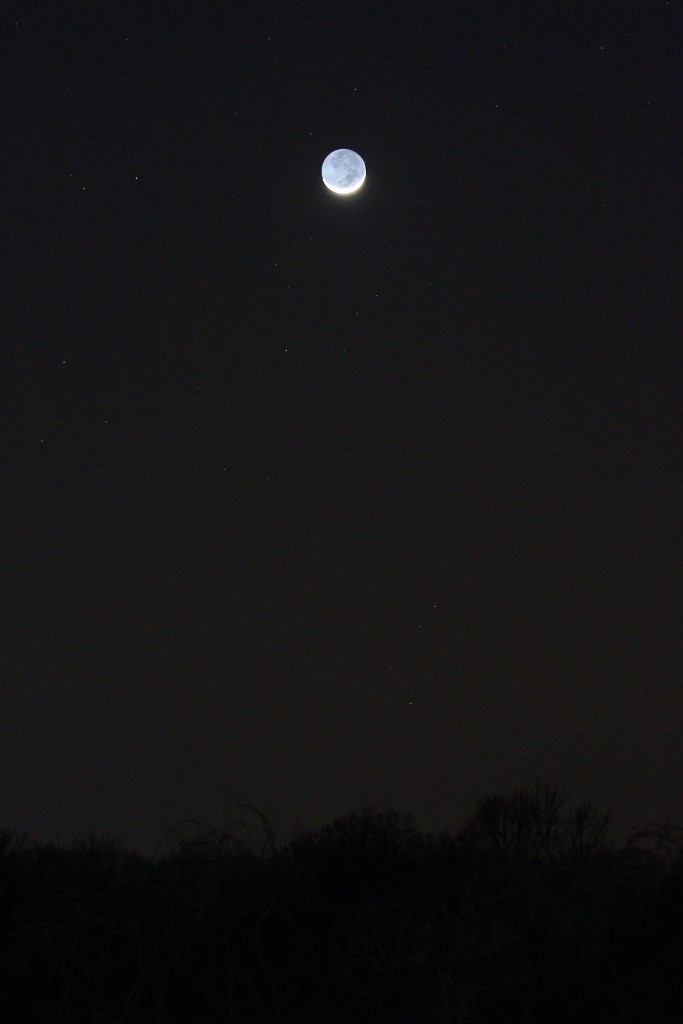 I have not done this, but you are going to be be shooting across a huge dynamic range. The lit crescent of the moon will essentially be lit as daylight, while the remainder of the moon (and the night sky) will be many stops darker. That said you are trying to capture the much darker portion of the moon, so you will need to increase your exposure to make it visible.

Getting down to the mechanics:

We have a number of competing options, you will want to use a long focal length to show a lot of lunar detail (100+ mm), but the moon is surprisingly fast moving, so you will need to keep your exposure times around or below 250/{effective focal length}.

You will likely want to cleanup the resulting images by taking a few with a much shorter shutter speed to get a better capture of the crescent and then blend the exposures.

3
How would one get a moon shot like this?
2
How much does the Moon affect astrophotography?
3
Live view of moon underexposed Canon 7D with vintage zoom lens
0
HDR Help - Photoshop Cs5