Can I expand the number of digits in the image counter on my camera or software?

To my issue. Last year I had my first trip to Africa, ended up shooting 13,000 pictures with my 5D MkII - abusive, I know!

Transferring them to my computer went all fine, as they arrange in folders after date (after all I did not shoot 13k in one day). But the issue that arose when I wanted two images with the same number in the same folder (why is another story!). I assume this is an issue others have encountered, I solved it by adding "-1" to the end of the files, a quick process in automator.

However this is annoying for the sake of timeline in the folder structure, and even more annoying when trying to maintain a logical, resonable and sensible structure.

Is it possible to increase the image counter to the 100,000 instead of 10,000? I've figured no in the cameras firmware itself, but how about 3rd party software?

Hope I made myself clear about the problem, it was hard putting it into words and I haven't found similar topics either here or on google at all. I also have a 1D MkIV that I will run into the same problems with over time.

You can't do it in camera because it would be an exception to the DCIM naming standards which the camera follows.

As far as after the fact, I use the multi-rename feature of Total Commander for my bulk file rename operations. It's technically a shareware product, so you can try it and use it for that for free. It's really worth buying though cause it is cheap and comes with lifetime upgrades. I bought a copy of it back in Windows 3.0 days and haven't paid again since and it's the best file manager/ftp client etc that I've ever found (assuming you are on Windows).

The multi-rename feature will let you specify which part of the file name is the counter and let you increase the values by whatever you want.

One thing you can do in-camera with Nikon cameras is to alter the 'IMG_' prefix. I have friends who shoot events with Nikon gear. Each one has changed the prefix to their initials. It makes it easy to identify which images belong to each shooter. If you could remember to manually change the prefix each time the image number reached 9999 you could continue shooting without using the same file name until you had exhausted the limits of 'AAA' to 'ZZZ' (26^3=17,576 prefixes multiplied by 9,999 would yield 175.7M+ unique file names). Unfortunately, you can't do that in-camera with Canon bodies, but you can use importing software such as EOS Utility to translate file names automatically when they are imported. If you switch to from sRGB to AdobeRGB color space, the prefix in Canon bodies changes to '*MG*' from 'IMG_'. Video files have an 'MVI_' prefix.

Sometimes after importing them I open the folder with Digital Photo Professional in the main window (thumbnail view). By selecting 'View-->Sort-->Shooting Date/Time' the images are arranged chronologically (assuming the camera's clocks were synchronized beforehand). I then use 'Tools--> Start the Rename Tool' and renumber the images with either 'Fit to Main Window' or 'Shooting Date/Time' selected under the 'Sort' option in 'Basic Settings'. The 'Fit to Main Window' option allows you to batch rename files based on your arrangement of the thumbnails in the main window. 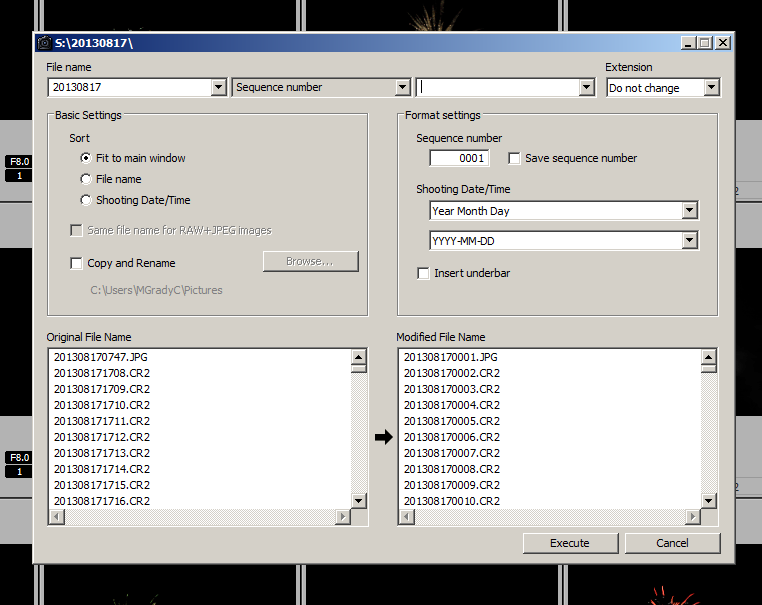 I really doubt it is possible with one exception, check out Magic Lantern. I don't think they do it but the coders who write Magic Lantern just might think it is a great idea.

Note, the file number might be a limit of the filesystem on the CF card, in which case it is almost certainly impossible to get around.

Not the answer you're looking for? Browse other questions tagged filenames or ask your own question.

4
Can the default file name on Nikon D40 be changed?
6
How can I import 2 photos from my 7D that have the same filename?
1
How do I get the photo filenames from my LX5 to continue from a given number?
3
How can I make ExifTool rename by camera model when the name contains a slash?
2
How to Reset File Number on the Fuji X-T10?
4
Can I Watermark An Image With Its Filename and Copy name when exporting from Lightroom?
2
How can I change the image counter on my Canon Sx240?
2
How can I get Lightroom to export a list of filenames, from the colour-labeled (or flagged) pictures?
1
How can I rename Image with modified date and overwrite filename with number count using Jhead Tool?