Can I automatically convert RAW images to JPEG when publishing to Flickr in Lightroom 3?

I am using Lightroom 3, with the built-in Publish To Flickr feature. When I have a JPEG image (that isn't too large for Flickr), this feature works very smoothly.

However, I often have RAW images, that I have tweaked exposure, white balance, etc, on, and I want to upload them to Flickr. This is where the Publish to Flickr feature falls short. I see this error:

It is possible that the issue is not that the image is RAW, but that it is too large. Still, I would hope that the Flickr integration would scale the image down, if necessary.

(The publish to Facebook option works well for these, which surprises me, since I would expect Flickr to accept more formats, and I would expect the LR-FLickr integration to be more polished.)

So, is there a way to insert a Convert to JPEG operation before the actual publishing to Flickr? (I also want to scale the image down, if it is larger than a certain threshold.)

EDIT: Thanks to @sebastien.b, I have hope! I know that I can export the images to my hard drive, and as part of that, convert them to JPG and scale them down. I can then publish those images to Flickr. This works, but I am hoping for something more smooth (unlike @sebastien.b, I have no particular desire to keep the JPG images on my hard drive, though their existence wouldn't bother me).

If there is an option to do this in the Flickr plugin options, I can't find it. This is what I am looking at, from the Plugin Manager:

There don't seem to be any user-servicable parts in there, unless I am missing something or looking in the wrong place.

Your images are too large, which is not exclusively related to being RAW, JPEGs can be too large as well. The solution is to send a down-scaled version to Flikr.

Right-click on the Flickr 'bar' under Publishing service. From the menu that appears, select 'Edit Settings', that is the first option. The 'Lightroom Publishing Manager' will appear. You should see a big scrollable area on the right, scroll it until you see a heading that says 'Image Sizing'. If you do not see the size options, then expand the section by clicking on the heading itself. I use Lightroom 3.2, in case that makes a difference

I use LR3's Publish To Flickr as well. My RAW files are 21MP, therefore to avoid the problem you mention I make sure the files are down-scaled to at most 2048 pixels vertically (my preference). Note that I first export my RAW files to JPEG, then publish my JPEG files. The reason I do this is because I want to keep a copy of my JPEG files on disk to share them with other devices on my network. However, the "Image Sizing" parameters are exactly the same in the Publishing Services, so the info below still applies if you want to publish RAW files directly to Flickr and resize on the fly. Check Adobe's Specify export image sizing for more info.

Select your Publish to Flickr service, and pick "Edit Settings". Go to the the "Image Sizing" section, check "Resize to Fit", select "Width & Height" and check "Don't Enlarge". Now in the "W:" input box enter "0" for width, and in the "H:" input box enter "2048" for height. The 0 value here instructs LR to constraint the width to your maximum height (here, 2048) while keeping the same ratio. Below is a screenshot for my Export preset, but the "Image Sizing" section is the same in your publishing service. 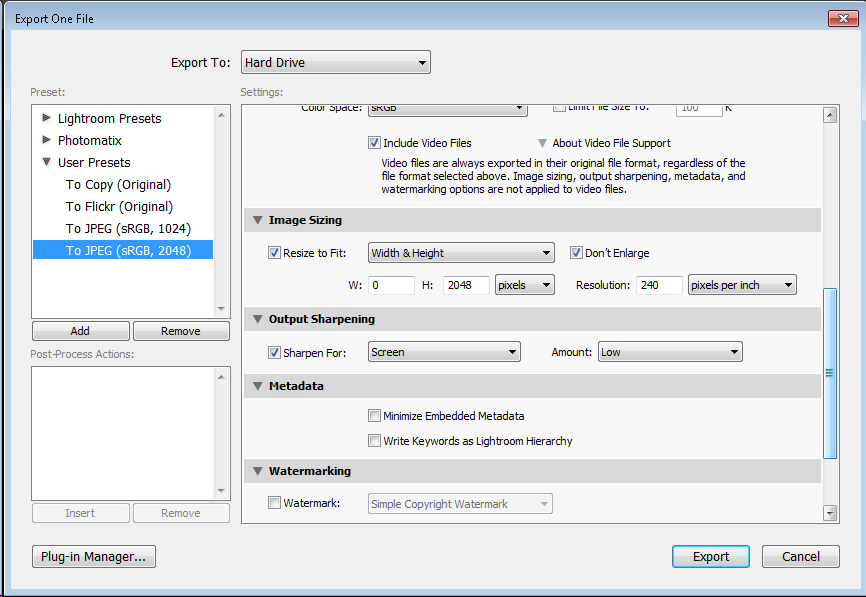 UPDATE: well, turns out this 0 value for "W:" was working when in LR2, not anymore in LR3. It will only let you go as low as 1, not 0. Good thing I kept my old presets around. Not a problem though, you can specify 2048 and 2048 in the input boxes, and your photo will be at most 2048 wide for landscape, and 2048 tall for portraits. If you feel adventurous, note that your Export Presets are stored in text files in your Lightroom User dir. For example, my "To JPEG (sRGB, 2048)" preset is stored as "To JPEG (sRGB, 2048).lrtemplate". If you entered 1 for "W:", you will find a "size_maxWidth = 1" line in your preset file, which you could modify with a text editor to "size_maxWidth = 0". Unfortunately I don't think I see such files for Publishing Services...

As was mentioned already, you may want to use 1024 if you are concerned people could steal your original photo for print. Or from Flickr, disable "Download Original".

I only shoot raw and I use LR3's Publish To Flickr service to export images as jpeg to Flickr with no problems, and with no requirement to do anything special just because they're raw. The publishing service takes care of resizing the output jpegs for me automatically.

When you say "falls short", what exactly is the problem you're experiencing?

Not the answer you're looking for? Browse other questions tagged lightroom flickr lightroom-3 or ask your own question.

8
Should I convert my JPEG images to DNG in Lightroom 3?
6
How do I get Lightroom 3 to upload my original JPEGs to flickr?
12
How to mass convert RAW images into JPEG in Lightroom 3?
1
How can I export TIFF images to JPEG with no adjustments, using Lightroom?
8
Can I make Lightroom see existing Flickr albums as photosets
2
Lightroom upload to Flickr: Replace Re-Published photos
3
Lightroom: Combining previously imported raw and jpeg files to become a single raw+jpeg
2
In Lightroom CC, Can I export using same quality as original jpeg
1
What's the difference between "Publish to Hard Drive" and "Export" options in Lightroom?
1
Is replacing images on Flickr (via Lightroom) possible in 2021? If so how long does it take?