Some lenses give really harsh and unwanted flares. Some gives beautiful flares that add depth to an image. What's the science behind this?

There is a distinction between HAZE and flare - for the purposes of this I will cover FLARE only.

Lens flare is caused by light from a particularly bright source such as the sun or a bulb directly striking the lens element surfaceS at an off-centre axis, and not being REFRACTED but instead being REFLECTED either off the back surface of the lens element, OR off the front surface and therefore striking the back of the element in-front of it. Note that the light source does not need to be "In Frame" but it does need to be directly incident on the element surface.

Something to watch out for is "fake" flare caused by CCD sensors, which shows up an a sort of blurry rainbow chequer-board around a light source, this is not attractive OR a lens related effect.

EACH element is capable of creating ONE "flare" circle (or streak if it is the anamorphic element group), which vary by:

The APERTURE also effects the shape of SOME of the flare circles, as well as introducing the starburst effect, which varies depending on the amount of petals the aperture is made from (Note a PERFECTLY circular aperture will produce no starburst, nor will it appear if shooting wide open)

So in order to create an 'attractive' flare (which is subjective) we need:

A Flair for flare.

Flare reduces the contrast of the image captured. It can affect the image overall or selectively. I'm going to make a great leap of faith and guess that you are after selective flare such as a round or symmetrical shape that plays across the image.

Your concept of what is beautiful and desirable versus undesirable is personal and will vary from person to person. Ironically, some lens designers lose sleep trying to eliminate flare. Flare would ruin any print by Ansel Adams, for an example. Beauty is in the eye of the beholder.

Flare is non-imaging illumination. It's increased with irregular contamination of the lens surface with objects of various size such as tiny pieces of dust. With some care and experimentation, you can place material on the surface of the glass itself. (You can be as carefree with this technique as your budget allows. You may just have to discard an expensive experiment, though. Yipes!)

An alternative is to shine a pattern of light directly onto the face of the glass from just outside the lens field of view. The variation of the source of flare from the image illumination will be enhanced against a dark image background.

Things in front of the lens that are not in focus can give the effect of flare, too. Wisps of hair or gossamer net, web, or lace will also appear as a kind of flare since it, too, reduces the overall image contrast.

Sometimes, flare is a term used to describe an effect caused by the internal reflections of the lens elements themselves. This effect is created by software in some science fiction films as we follow our heroes as they fly by bright objects in the heavens. They appear as aligned and often overlapping disks and circles of light that show against the darknesss of outer space. In this case, it is software that mimics the real effect.

The biggest contributing factor to lens flare is the ability of optical glass to bend or bounce light depending on the angle of the light ray hitting the surface of the glass. Shooting obliquely or directly into light sources can give unexpected pictorial results.

Some creative souls strive to create internal reflections, against the express desires of lens designers who want maximum image definition, with bits of reflective foil placed behind the lens mount and offset from the image cone. These are placed to reflect light back into the lens body to create image flare. With some practice it can be creatively controlled.

Putting stuff into your camera is not recommended for those with a limited budget. I'd also frown on anyone borrowing my equipment for their experiments without my permission. (But, I'd like to see your experiment tho'.)

Lens flare can be put into a lens on purpose by altering or removing what lens designers do to reduce it.

Flare is affected by the following characteristics, among others…

Anti-reflective lens coatings, the number, position, and type of light baffles within the lens barrel, the age and condition of the matte black anti-reflective paint within the lens body, the presence or lack of edge coating on each of the elements, the use of different optical adhesives for compound lenses, the lens formula, the lens glass, the scratch and dig specifications for the lens surface polishing, mechanical placement and alignment of one or more of the lens element, the presence or lack of contamination in the glass itself, what portion of the lens is active, etc. The number of flare-producing images formed by a lens system equals N(N-1)/2 where N represents the number of glass-air surfaces.

Light rays that are off axis and parallel to the lens axis create stronger flare than rays striking at a shallow angle cross-axis (orthogonal). Internal reflections are at a maximum when the incident light is within the field of view.

Rainbows, aka transverse colour aberration, are the result of the inability of R, G, & B not having the same degree of refraction when dispersed from a white ray off the lens axis. Those tend to come from reflection from the lens edges much as a dispersion prism breaks white into component wavelengths. We edgecoat lenses now to minimize this. We could use a bigger glass and keep the rays near the centre; but, that extra glass is not necessary, now that we know of the workaround.

IMPORTANT DETAIL: In order to create flare, it is necessary for some strong source of light to strike the objective surface of your lens. If no light source strikes your lens, the flare produced will not be strong enough to be seen clearly as flare in your image. That's why you must aim your lens toward a source or sources for the effect to be visible against a dark background. The lighting is an issue; but, not a lens issue. There's flare in every shot no matter how you shoot it; but, it is beyond your ability to see it most of the time.

Panavision offer dedicated lenses attributed to more desirable lens flare - this all comes down to the coating and treatment of the glass: http://www.panavision.com/content/spherical-specialty

Additionally, in films such as Star-Trek, Super-8 etc, they have hot lights just off camera to add glares already attributed to the on-camera light sources. Though some glare characteristics can be generated from anti-glare treatments, such as the blue-line glare seen in film such as Star-Trek.

Flare is a non-standard use case for a lens, i.e. it's outside the intended operating conditions. As such it tends to be a little bit random how a lens flares as it's a side effect of various design decisions that are made without concern for how it affects flare.

I have heard many times anecdotally that older lenses that are less thoroughly corrected for aberrations produce more attractive flares. That's probably as scientific as it gets, without considering individual designs in intricate detail.

For example, the Canon EF 50mm f/1.8 produces a type of flare I've never seen in any other lens:

Now you could spend the time to examine the design of this lens to find out the cause. Lens flare is not magic, there, it is based on science. But since this effect is as far as I know unique, analysing wont help you predict how a different lens will flare.

My advice to you would be as follows:

Older, cheaper, after-market lenses made for film cameras did not always have good coating.

None of the film camera lenses needed two sets of coating - in the front and back. So if you have a camera that lets you play with older lenses, try to buy some cheaply off of garage sales or Craigslist or rent some, and as suggested before, experiment against a strong source of light.

I have also been able to produce flare by shooting film, with older lenses, focusing directly on sunlight.

Sometimes, the absence of more elements than absolutely needed, and of modern coatings that can give multicoloured ghosts. 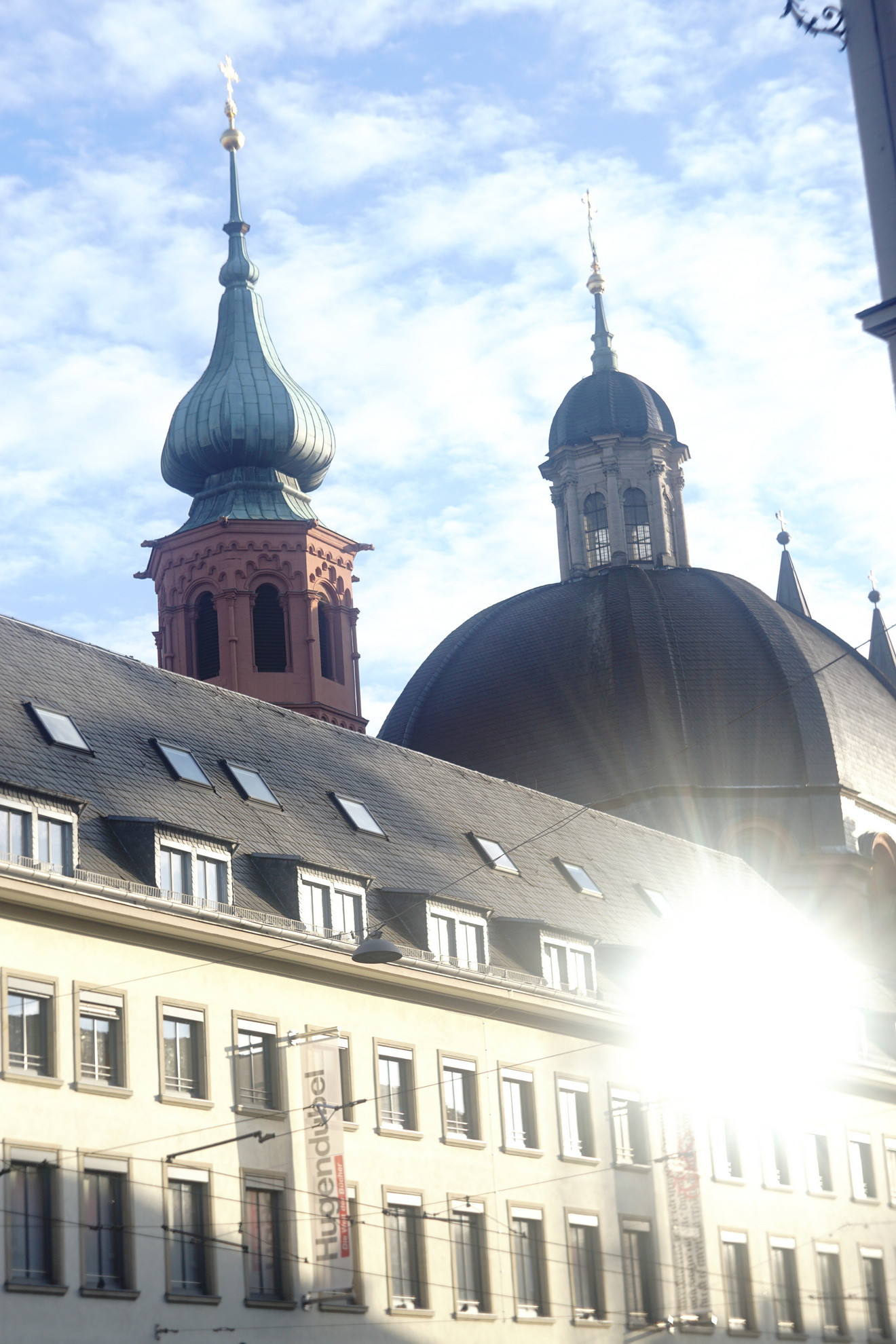 Steinheil Cassarit f/2.8 45mm at f/4 or f/5.6 on Sony APS-C, scaled but otherwise as shot, daylight balance, "clear" creative style. This is a simple triplet (with its disadvantages - see corners) with first gen coating.

Not the answer you're looking for? Browse other questions tagged lens optics lens-design lens-flare or ask your own question.