What are the copyright issues when selling photos of public art?

I know that it is illegal to take a photo of another photo, but does anybody know what the legal situation of selling a photo that includes a sculpture that it is in a public place? 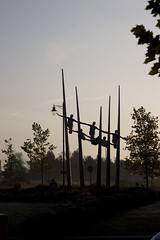 I'd like to interpret it as my own derivative work, and as it is taken in a public place, that no special permission is required under UK law; but would the situation change if I wanted to sell a copy to (say) the local pub?

I appreciate that jurisdictions will vary, and I'm primarily interested in works created within the EU, but if there are principles within the Berne Convention, that would be good to know for a worldwide audience

I am no lawyer and do not claim to know about this however I can refer you to the UK Photographers Rights which is a great PDF summarising many of the points written by a lawyer.

In it is says:

It is not an infringement of copyright to take photographs of buildings, sculptures and works of artistic craftsmanship that are permanently situated in a public places

though I advise you read the whole PDF in context as there are many restrictions and times this does not apply. The PDF also highlights when there is a difference between commercial selling and private use so worth a read.

That said personally I agree with sebastien.b answer to get a release (which is also mentioned by Scott Kelby in his photography book) as you then know you are covered.

Remember as the PDF says If you require full legal advice please consult a lawyer.

Although property does not enjoy a right to privacy or publicity that there are other bodies of the law that might prohibit or restrict the unauthorized use of a photograph containing property. These bodies of law may include among others contract, trademark, unfair competition, copyright and trespass law. The guiding principle, that of course is muddled with exceptions, is that as long as a photograph of private property is taken while the photographer is on public property or on property that is open to the public then it is permissible to publish that photograph without permission from the owner of the property. However, there are exceptions where it may be necessary or advisable to obtain permission from the owner of the property. These exceptions may include among others, [...] (cont.)

Update: Top 10 Misconceptions about Photography and the Law. #5. You need a property release to use a photograph of a house for a commercial use. Apparently not. As I said. Different opinions.

Selling shots of Eiffel Tower by day is not forbidden. It is in public domain.

Selling shots of Eiffel Tower by night is submitted to authorization of the company managing Eiffel Tower. Simply because light effects are copyrighted.

I learned that the answer is no, not if the sculpture is considered to be materially part of someone's brand and you're in the US.

The issue for me was some pictures of buildings on UCLA's campus. One of the faculty liked them and wanted me to give them to him for free so he could print them; I refused, and so he referred their copyright office to me. The office informed me that the buildings in question, since they had been used in letterhead and the like, were considered part of the university 'brand', and so selling photos of them would be considered to be material infringement on their copyright.

I recently read an article suggesting that such a thing was happening with Stonehenge at the moment.

Now, it may be that a lawyer will tell you that they were full of it. I just decided that fighting that fight wasn't worth it, so I didn't sell the photos. And I don't talk to that faculty member anymore.

Not the answer you're looking for? Browse other questions tagged legal copyright or ask your own question.

18
What is the philosophical justification generally accepted by photographers on why they should be able to profit privately over public property?
9
Street Photography: Can you take pictures on the street and enter them in contests?

12
If I use a public domain image can I own the copyright to the resulting artwork?
17
Resources for persuading that photography is not a suspicious activity
16
How do you detect when your photos are used without copyright permission?
34
Why are tripods forbidden in some public spaces and how to deal with it?
2
What legal issues are there with selling photographs of white river rafting companies?
5
Publishing photos in UK
6
Does offering an embed feature violate copyright law?
6
How do I handle international copyright violations?
4
Is photography banned at Birmingham New Street Station (UK)?