I want to buy and do a photos+video interview with Sigma F/1.8 24mm Fixed Prime.

But the I also want to shoot some pictures/interviews in a big house balcony with nice view of cathedral square. The problem with 85mm F/1.4 (used at F/1.7), that the background is also zoomed a lot and camera stays far from interviewee.

My questions is - will 24mm will not distort the humans face (sitting in left 1/3) so that in videos or photos it will look bad? And 2nd questions, which is the best 24mm lens for nice looking bokeh, and king a sharp human face in a picture.

I want to use it in ~F/1.8 range when shooting videos/pictures.

Or should I go with 35mm F/1.8 Sony SAL prime lens, because of face distortion.

Imagine that that photo video would go on TV.

Thanks for any advices, because I got lost between choices.

As per request I'm putting the past attempt, when I used 85mm at F/1.7 on A77 APS-C. Camera was around 10-12meters away probably. And there is a palace in background, but I was not able to capture it This is a screenshot from a video file (it does not allows me to attach images): 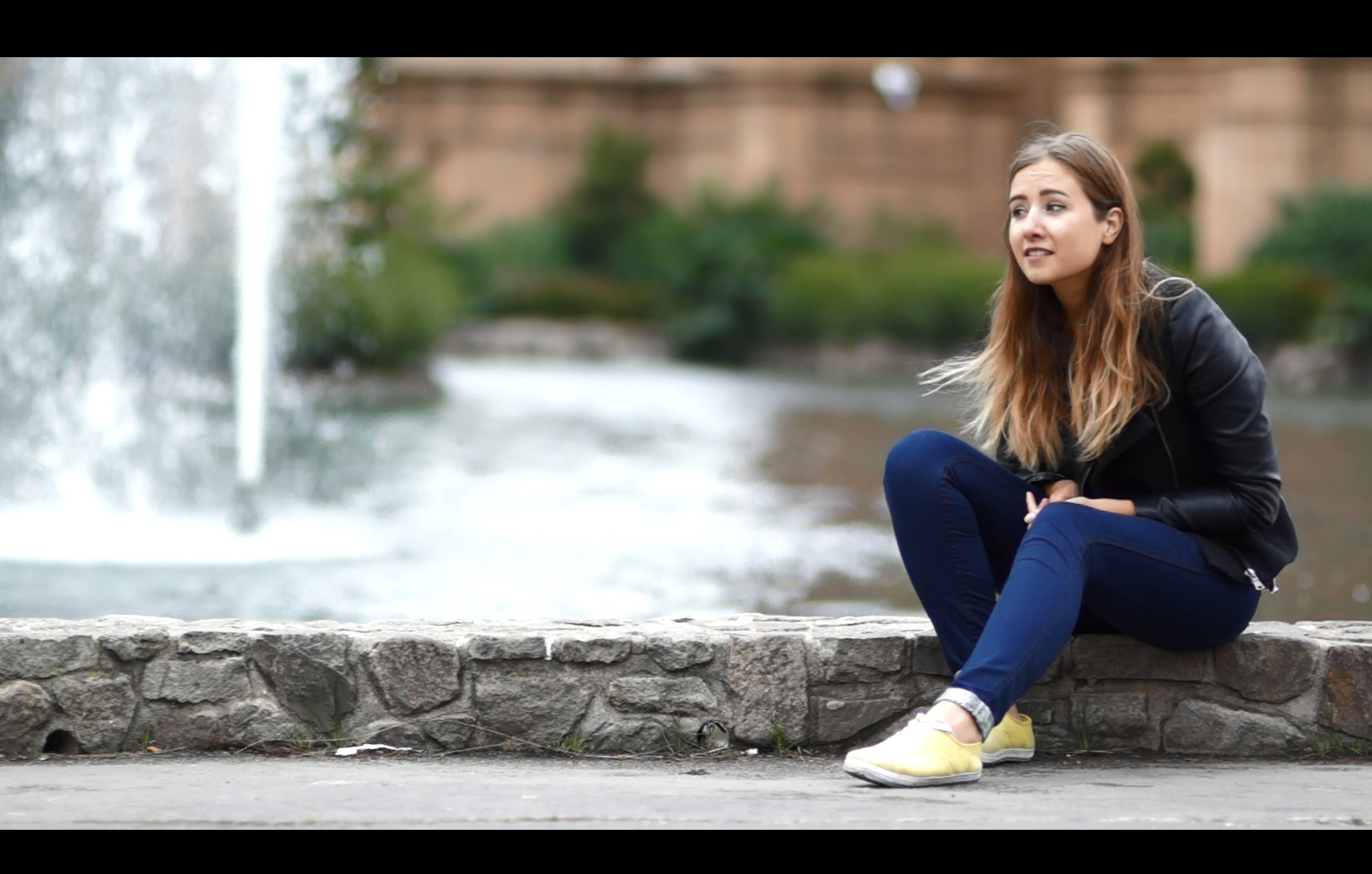 My questions is - will 24mm will not distort the humans face (sitting in left 1/3) so that in videos or photos it will look bad?

As you noted, on a crop-sensor camera a 24mm lens will effectively be about 36mm. 35mm is a very common focal length for "environmental portraits" -- not "head and shoulders," but showing some of the surroundings, too. So, if you use a 24mm lens on a crop-sensor body to take environmental portraits, I'm sure you won't have any distortion concern. If, on the other hand, you want to do "head and shoulders" portraits you will see less flattering results with the 24mm lens. It won't look bad and it won't really appear distorted, but it will be less flattering to the subject.

The depth of field, which determines how much background blur you get and how quickly the person goes out of focus, is determined by the focal length and aperture of the lens as well as the focal distance. It is going to be the same from lens to lens.

You need to use an appropriate aperture for your shooting distance and focal length such that you can get the depth of field you need to keep your subject in focus and still get the amount of background blur you desire. Many online depth of field calculators are available to help you with determining what distances, focal lengths and apertures will work for your needs.

So I ended up with this calculator: http://www.dofmaster.com/dofjs.html

And I accidentally found a lens which I really liked - it had very best reviews about the Image quality, very beautiful Bokeh, and had lowest possible distortion in this range.

I believe I will be happy with It, because when I found that this lens is supported by Sony, I felt 'oh, I was searching for this lens, and I finally felt that "I found it" feeling'

You were saying that the background is blurred. When you're shooting around f/1.7-f/3, you're going to get a blurred background. The wider the aperture is, the shallower the depth of field. As you stop down to say maybe f/5.6-f/8, more will be in focus due to there being a deeper depth of field. I'd recommend shooting f/5.6-f/8. Anything above f/10 is closing the aperture too much. In order to compensate, adjust the ISO, exposure, or shutter speed. I think you said you're taking video, so don't increase the shutter speed too much, or else it will give audiences headaches due to the lack of motion blur. Of course, you can add in motion blur later, but you're making yourself do more work in post.

Not the answer you're looking for? Browse other questions tagged sharpness prime sony sigma bokeh or ask your own question.

9
Does a 35mm prime lens show the same bokeh as a 50mm prime lens on a cropped sensor?
1
Need recomended lens for both "full body portraits" & "family or groups" both with background bokehs
3
Is an 85mm prime lens worth getting to blur backgrounds, if I already have a 50mm prime?
0
How does background blur and DoF vary with sensor size for a prime lens?
3
Do you get more bokeh on a APSC sensor with a full frame 50mm f/1.8 lens or a APSC 30mm f/1.4?
2
Which should I buy as a starting prime lens, Canon 35mm f2 or Canon 50mm f1.4?