Are the Sony NEX5 features appropriate for music festival/concert photography?

I am in the market for a semi-professional camera. To give you context, I am writing for the DownBeats blog covering music festivals. I am looking for a camera that can: -Take quick photos -Is good at low light (fine with adding lenses) -Is reasonably portable -Budget in the $500-700 range including accessories

The camera that I have been looking at is the Sony NEX5, which I think hits on all my points but I'm not sure if this is the right camera for me. I've been photographing for a long time with point and shoot consumer cameras but haven't done much with pro level stuff. My other concern with the NEX5 is that there isn't a built in flash, but with a good lens do I really need one? Also no view finder may be harder for daylight, but I think I can work around that.

Personally, with the lack of any kind of viewfinder (optical or EVF) I would recommend strongly against the NEX5. A viewfinder isn't just a way to see what you are shooting, but also a critical third point of contact for taking stable shots. Without being able to hold it up to your face, taking good shots, particularly at a distance, is going to be next to impossible without using a tripod which isn't going to work well for your stated objective of shooting festivals.

You would be far better off getting an entry level DSLR such as a Canon Rebel. The entry level models still won't be particularly strong at things like low light, but they will allow you to invest in decent lenses over time so that eventually you can upgrade to an actual semi-professional body without having to buy lenses at the same time.

The ability to use a flash is also pretty critical to many shooting situations, particularly exterior shots with the sun behind the subject, since flash is necessary to fill in facial details and get a good look to the shot. Again though, in your price range, you wouldn't be able to afford a good flash since a good flash alone will also run you $300 to $500.

That is a very tight budget. I'd suggest going through some second hand shops for used gear. Find a nice zoom lens so you won't need to change during the concerts, and when you have that lens you search for a DSLR body that fits the lens. Notice the need for image stabilizing and autofocus motor. Some cameras have those in body, so you don't need them built in lens, though a focus motor in camera body often makes for a bit slower focussing. Coming from the compact cameras makes any kind of DSLR autofocus seem lightning fast to you, so not a big worry at this point.

Most of the time you won't be needing a flash, but that depends of course on the the type of music festivals you'll be covering and what else you'll be photographying. The stage and bands are usually lit well enough. But of course you already know this all.

You said you don't have a problem of long distance to the bands, so I guess even a 100 millimeter lens might be long enough in your case. No harm done if you find a longer than that. And for wide angle you would perhaps like something near 20 millimeters. Note: talking about cameras with APS-C size sensor here. Just for an example: a new Sigma 18-200 mm zoom is currently $350 in B&H so a used one (if you can find one) would not cost you too much. And then you'd have some money left to buy a used body (for this particular lens it is a Canon of APS-C size) and maybe a small bag to carry it.

As long as you only aim at getting imagery for your blog, the camera body is not of extreme importance. But better cameras make less noise (visual image noise, not talking about sound) and you will want that when you get more money. For your gig that's in three weeks, I say your best option within budget is to go roam thru the used gear shops.

And to answer your question: No, a Nex 5 is not a camera for your needs. You will want to have the added stability of having the camera up pressed against your eyesocket. Lens for these cameras weight often the same if not even more than the camera body, so you will not be holding it the same way as you keep a compact camera. Viewfinder is good for framing too, much better than a rear lcd-display at arms lenght. And an entry level DSLR camera is not too heavy either. And finally, carrying a DSLR on you the other photographers won't be looking at you like you were an alien or a simple tourist.

A sample photo taken with a zoom lens at 70 mm and cropped a bit to show approximate 100 mm view (which is about 150 mm in 35mm equivalent). I was standing in the crowd near the mixing table. The band is "Him". My camera plus two lenses total cost 10 weeks ago was about $650 if using direct currency converter (it was €500 in my country) so I'm right there with you, only I don't aim at more quality than just what pleases myself... 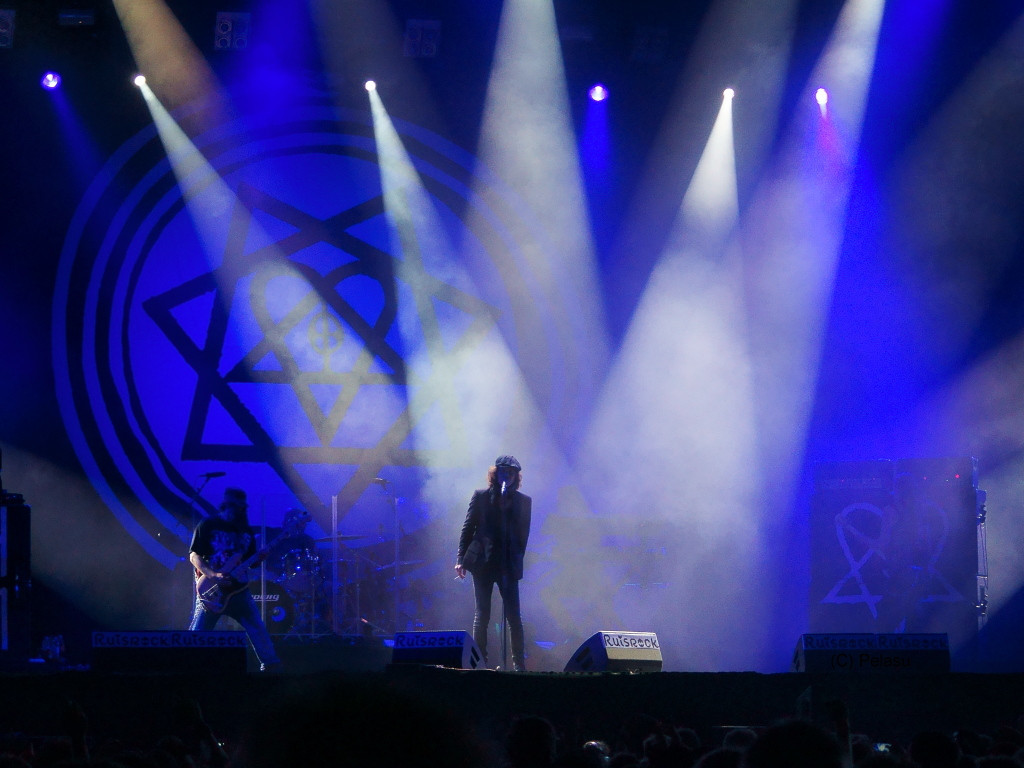 Not the answer you're looking for? Browse other questions tagged sony-nex concert or ask your own question.