Do fluorescent lighting and shutter speed create a problem with color cast?

I took a bunch of photos at my son's martial arts club using a D90 with a 50mm F1.8. The club is lit with overhead fluorescent lighting, and I was getting some weird results where some shots are "white", others have an "orange cast", and still others are partly white and partly orange in the same shot.

I suspect it has to do with the combination of the frequency of the light flicker and with the camera shutter speed. Here is a sequence of 3 shots that show the problem. The shots were taken with 1/500s at F2 and ISO-800 and with Auto-WB. 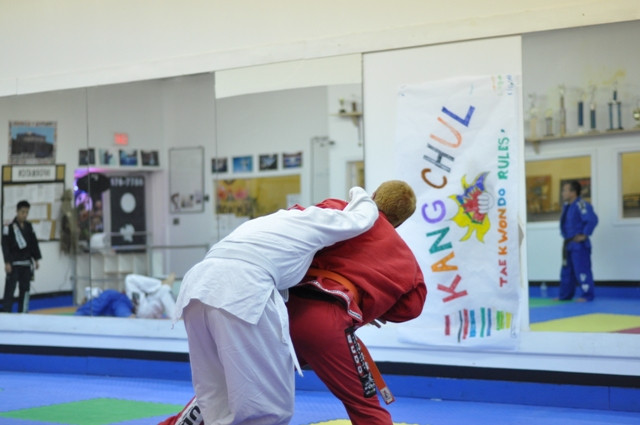 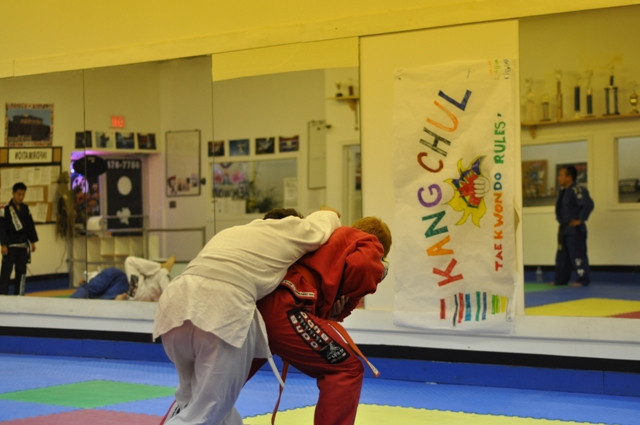 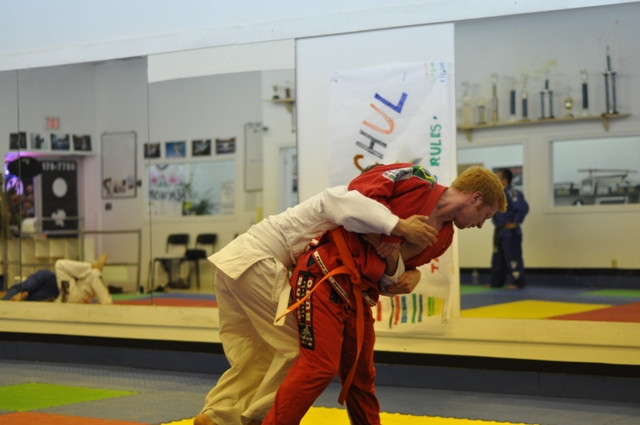 These were taken in burst mode within a second of each other.

Can anybody tell me what is going on? And, how I can avoid this?

Fluorescent lights can flicker at twice the frequency of the current feeding them, which implies an entire cycle of the flicker will take between 1/100 and 1/120 second. During each cycle the light's intensity and its color temperature can change. Thus, if you're using a shutter speed of 1/100 second or faster, you might observe exactly these phenomena: your photos make an interesting document of them, especially the bottom photo.

Details appear deep within a good Wikipedia article on fluorescent lamps under the heading "Flicker Problems". The article references "The Feral Photographer" blog which gives a brief (simplified) explanation from a digital photographer's perspective.

For sports photography indoors you need a short exposure time to freeze the action. Consider flash options if they are possible. Very short exposures (down to 1/4000 second typically) can be achieved with HSS flashes. To an extent you can adjust the color balance, especially when you're shooting RAW images, but that's going to be tricky during the color transition.

Fluorescent lights are terrible news for photography, and this is just one of the reasons! They give out light which is missing a big chunk of the red spectrum, which can make skin tones look greenish and unhealthy, they are usually different colours from each other even if the tubes are the same type, and they change colour during the power cycle!

Your options are to sync your shutter speed with the lights, by shooting at 1/25s 1/50s (assuming 50HZ mains frequency) but this isn't good for action photography. Your other option is to reduce the shutter to 1/250s and use an external flash on full power bounced off the ceiling. The short flash duration will help freeze the action. HSS is possible but you might have difficulty overpowering the ambient light as this option costs power! If you still want to use burst mode an external power pack will be needed.

The answers given by whuber and Matt Grum are correct, pointing out the flicker problem and some workarounds. My addendum comes 6 years after, where we are now beginning to see some real solutions to the lamp flicker problem: 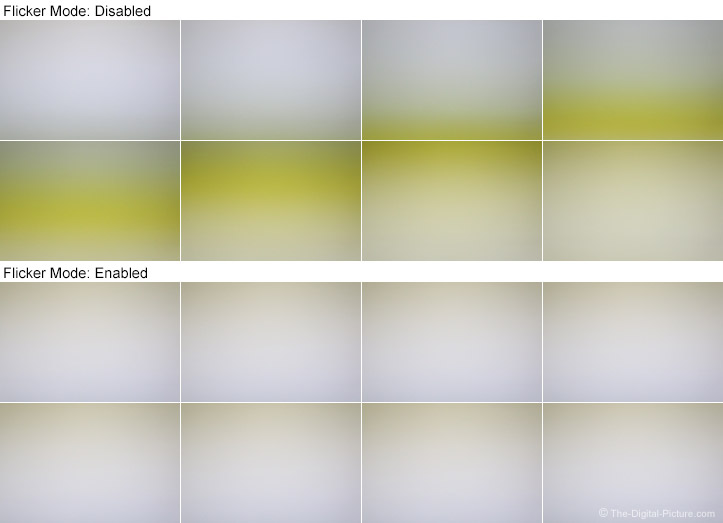 As others point out the lights are essentially blinking different colors during your exposures. What's worse is that different flourescent lights are on different circuits, so may be out of phase by 180 degrees, and unless they installed the same temperature color bulbs in all the fixtures (unlikely), color variations through a cycle will be even greater.

Lastly, since the color temperature is changing, the camera can't get a good grip on white balance for exposure.

You have a few options:

I've had exactly this issue over this past weekend covering a national karate championship with 4 other shooters. Flash was not an option. For the multi coloured image which won't respond to one simple colour temp fix, I intend using Lightroom 4's new feature of painting with temperature and tint, a sort of roving gelled brush. Only doing it for the print orders, not for the 4300 now posted to my gallery. They have been near enough is good enough with an explanatory note on the first page. An added issue in our case was the cast from the blue floor mats and the ambient through some windows

If flash isn't an option but you're there officially and reasonably close to the action, what about halogen floods (poor man's studio lighting if you like). Many years ago I had some cheap 8' tripod mounted 500W floods designed for DIY work, modified to 3x500W each.

Something similar may work here, at least to reduce the contrast from the fluorescents to something more manageable. You would need 2 or more stands and to work between them to avoid the shadows being too intrusive, and multiple lamps per stand significantly softens the edges of shadows.

LED based and high-frequency fluorescent lamps would also work, but to get the intensity would end up costing a lot.

Shoot it at 1/125th and your color problems will be solved. Having a shutter that slow negates the effects of a rolling shutter. I believe the lights cycle at 120Hz. Shooting at 1/125th will give you one full sine wave and thus the best color results. It doesn't matter if the lights are on separate circuits and out of phase with one another.

Shooting at 1/60th gives you 2 full sine waves and the same color, but you have to worry about motion blur much more.

As well as shutter speed you need to set white balance not use auto wb. Set your white balance to florescent if you have that setting but using a color meter to measure the kelvin temp of the lights and setting that as a custom white balance would be better.

Not the answer you're looking for? Browse other questions tagged lighting color white-balance shutter-speed fluorescent or ask your own question.

17
Why do I see this yellow color shift at high ISOs and fast shutter speeds?
4
What is the green tinge in my photo?
2
Weird orange artifacts in smartphone image of a white light source
1
What can cause yellowish horizontal bands when using a relatively high shutter speed?
26
Quiet mode on my DSLR is not quiet enough. How can I make it quieter?
22
When should I upgrade my camera body?
20
What is a rolling shutter? When do I have to be aware of it?
17
What causes these inconsistent dark bands in some of my photos from an indoor event?
8
Shooting full manual during an event or function
8
When and why should I consider buying a speedlight/external flash?
See more linked questions

35
How to white-balance photos shot in mixed-lighting environments?
17
Best fluorescent bulb color temperature for shooting people and interviews?
18
How to take photos of large groups (over 100 people)?
2
Problem in white balancing photographs taken in sun
3
Why isn't my grey card giving me repeatable results in the same room with different lighting?
10
Why are the colors so different in these two photos from different cameras even though I set white balance to the same temperature in Lightroom?
35
Should changing the shutter speed affect the moon's color?
2
How to restore color of wood photographed under fluorescent lighting?
5
How to edit photos shot in fluorescent light