How do I create this soft and bright effect?

This is my favorite look for photos, and I've been trying to achieve this for some recent family vacation photographs. What is the process?

Here are some links to some examples:

There is no pure white in these pictures, and that's one reason why they look arguably good; the highlights ARE bright, but they're holding some detail and color while keeping good midtone contrast and nice warm tones in all shots.

Now, to take this simple analysis one step further, let's have a look ak the info palette in Photoshop. Starting with the shot of bottles of champagne, we find RGB values such as 243,239,229 in the lightest parts of the ice. Warm yellow. Lab values like 96,0,6, which leaves no doubt.
Now have a look at the shadows, they're quite clipped but far from black and you'll see green is clearly lower than red and blue, so those parts of the image are quite purple. Even though they're a bit too dark to notice the colour cast at first sight, this is important to the overall feeling of the picture.

Two guys standing: parts of the white jacket seem to be blown out, then brought back, simply lowering the point of white, and it's a very light warmish grey (look at the jpg artifacts). The out of focus higlights on the background fence are even warmer and not really pure white. A Lab reading of the sky shows most of it is practically neutral. The shadows in the sunglasses are almost clipped, showing no detail, but it's not black: the red channel is quite strong.
So this photo is very warm overall.

Kinda the same story for the waiter holding a tray of canapés (or what it is): warmish low contrast-higlights, almost same values as the white clothes in the other shots, and red-purplish plugged "blacks" (14,6,8) or a very dark magenta if you prefer (Lab is 3,2,0)

I don't think strobes or such were used for these shots, maybe a reflector (maybe). It looks like it was a bit cloudy, it helps, also some detail shots were taken in the shadow of a room or a tent, and they pulled up the shadows a bit (I'd guess that from the faces and necks).
If you take the trouble to analyze the pictures and get to know which colors you need it's relatively easy to get close, with simple sets of curves in photoshop or some tinkering with a million different sliders in lighroom. On the other hand it's hard to get the same overall rendition with a different camera, different light, and different pp workflow.
Have a try at it, and have fun.

Some more thoughts (AKA what's important): at first my answer came out, in some way, as a reaction to another answer, which stated clipped pure whites and some sort of lighting are needed to obtain the look of the photos posted by the OP, while I think it's just a matter of correct exposure, having the right ambient light (a mixture of sunny and cloudy/hazy, plus some shade for the detail shots), and some post production toning, which can be analyzed to some degree.
Now I realize I didn't actually answer the question, so I'll try to say something more useful. It looks like the shots were taken with a good DSLR and some fast lens, and here's why. The tones are smooth, even though they don't look too processed, and the dynamic range is nicely controlled. The background is quite out of focus even though it doesn't look like a very long focal length was used (at least, for most shots). Subjects are sharply in focus. It's all done properly and professionally. But technically speaking you don't need pro-level gear to do that kind of work. A good normal lens and an entry level DSLR is all you need. The weather needs to be ok, but then even a point and shoot can get you close. Set low saturation and contrast, walk away, zoom in.
Then comes the post production, and what I can say for our purpose is we need to "lift" midtones and higlights, making them warm, not blowing out anything. I'd think of this as curves, but any method will do. Curves will need to have very roughly this kind of shape. 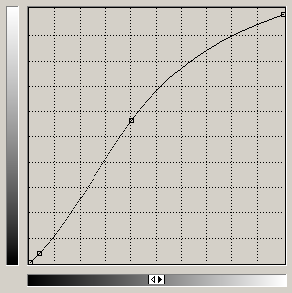 Keep in mind we previously set a slight negative meter correction in camera, to avoid blowing highlights to white, but we didn't worry too much about that. In fact with this curve, which will be about the same for every channel (assuming we work in rgb) we also take any blown-out white back to a warm grey, smoothing the transition from very pale color to what looks like white but isn't. It will be warm because the right side of the curve will be "lowest" in the blue channel, and it will be a bit "higher" in the red, keeping the green in the middle. The left part of the curve, on the other hand, will be kept "lower" in the green channel than in the red and in the blue, so we get "purple blacks". This will be useless for some people here (they already know this stuff, or they work differently to the same end) and I'm afraid it's a bit too complex for a newcomer. So, just for the sake of it, here you have this crazy ramble. :-) Last thing, then I stop, I promise: I wouldn't call those photos "soft and bright".

Proper lighting, shooting raw and boosting the highlights slighting into clipping. It varies from photo to photo. The second one appears to mostly be mostly the boosted highlights and whites. The first one appears to be more lighting based.

The thing to look for is if one part of the image is dark that would normally be the same intensity or not. If it is, then lighting was most likely used to light the brighter portion more than the rest of the image. If they are not and it just looks really bright, then it is most likely exposure being toyed with. The trick with the exposure is to properly expose the image but then clip the top of the image in to white. This makes it so the colors remain vibrant instead of washed out but still slides the highlights in to a bright pure white.

It also doesn't hurt to have a camera that naturally has a wide dynamic range. Some of the photos out of my Canon 5D Mark iii come out looking almost like a few of those before touch up because of the 14 bits of dynamic range being truncated in to 8.

These photos are good, but i don't see any special technique to achieve that. Some say:" a good image is the one which recreate what you saw on site." and mostly I believe these photos achieve that.

Good white balance: try to set custom white balance with a white paper on site. All other white balance setting is nothing more than an educated guess by the camera. You may do it in posts; however, you may not fix it properly if there are no white, gray or black object in the scene or to someone not very good at editing software.

Good lighting : wait for the cloudy weather is not good enough. a reflector, or a (on or off)camera fill flash will help a lot. You may go though tone of video of "what is fill light?" or you may put the fill light at the opposite direction of the main light as a good stating point.

Good exposure : Use "A" mode, try metering a human face(even you are not shooting a human subject) at the same lighting condition of you subject, and set "-1/3" of the exposure compensation. When high contrast situation, use reflector or fill flash.

Not the answer you're looking for? Browse other questions tagged technique photo-editing color or ask your own question.

-1
Photo filter: What is the name of this filter

6
How can I create a soft pastel tones preset in Lightroom?
2
How is this lighting and colouring effect achieved?
4
How would i achieve this background halo effect?
3
How do I achieve this very bright and clear portrait look?
2
How do I create this kind of soft and blueish look in Photoshop?
3
How could I achieve this soft-but-powerful-glow effect in post-processing?
7
Editing photos for this "milky" and "twinkly," vivid but nostalgic effect?
0
How was the twilight blue color effect in this photo produced?
6
Working on improving my photography of blue water in the Caribbean
3
How are these washed-out, but bright, colors achieved?