Is it possible to find the distance to which the camera is auto focussing ?

Camera auto focuses itself to view a particular plane in the real world in front of it. Is it possible to estimate the distance of this focusing plane?

Older manual focus lenses often had much more detailed distance scales than modern AF lenses. The f/numbers to each side of the center line indicate what distances would be within the depth of field (DoF) based on the assumption of a 35mm film sized sensor and an 8X10 display size viewed at 25 cm (10") by a person with 20/20 vision. Push/pull zoom lenses often included the DoF scales etched onto the barrel of the lens. 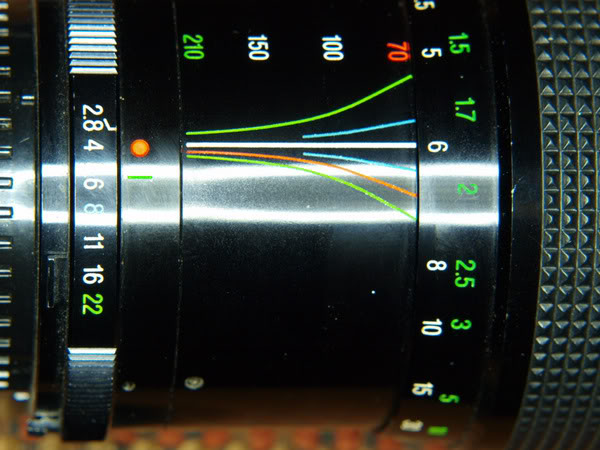 Not the answer you're looking for? Browse other questions tagged autofocus subject-distance continuous-autofocus or ask your own question.

11
Is it possible to measure distance to an object by adjusting the focus?
1
Tricking compact's camera autofocus
0
I have camera specifications but don't know the actual focal length
1
Is it possible to calculate the distance to an object using two pictures taken a few cm apart?
1
Using one focus point in autofocus mode - interval timer shooting - NIkon d7000
1
Why is my Canon 500D able to autofocus only after I manually focus it to the shortest focus distance?
1
How to accurately determine the size of a nearby object (~15cm) using the autofocus focus distance?
1
angle of view and distance from subject calculation for a smartphone