How to post-process underexposed sunset images?

I am a beginner, given an advice to underexpose when shooting sunsets. I did, and, well, what was underexposed, kind of looks underexposed. Can I tease out any more out of my material? My camera does not shoot raw. The best I could do was to shoot the largest files it would record. I know I can open them as "camera raw," but right now I don't really know how to operate in this mode. Moving things here and there intuitively does improve some of my images, however. I would like to master this mode (i.e., when a jepg. file is opened as "camera raw" in PhotoShop) to the extent it is possible when editing jepg images. Specifically, underexposed sunsets. Here is a link to one of the images I would like to improve. http://www.flickr.com/photos/96576146@N06/9063908406/in/photostream

The motivation behind the advice to under expose sunset is that the sun and the sky are very bright and you get more detail in the sky and better looking sunset if you underexpose a little.

Also, because of the brightness difference between sky/sun and whatever is in the foreground if you expose for the foreground the sun and sky will be very over exposed.

But there's a second part for this "trick", now you got a good looking sky but your foreground is basically a silhouette - so you add light to balance the foreground exposure with the background exposure.

Your camera's built in flash probably has the power to light a single person at close range but the light isn't going to look good, an external flash placed off camera will give great results for one person and can probably light a small group, to light a building you some serious studio lighting equipment (or a lot of small flashes) and lighting an entire street like in you photo is basically impossible.

So, your options are:

Actually, the sunset part is overexposed in the linked image. It's the foreground that's underexposed. And that brings us to the crux of the problem: the camera can't see what your eyes can see. Having a raw image with a higher bit depth would help, but there are circumstances, like shooting into a not-yet-set sun, where the camera simply cannot record detail in both the brightest and darkest parts of a single image.

Adobe Camera Raw can do some amazing things. Exactly what you would adjust depends on the version of Photoshop (or Lightroom -- the develop module of Lightroom and ACR are pretty much the same program under the hood) you're using. But with the picture you linked to, "amazing" isn't enough -- you actually need "miraculous". You can get to this point easily enough: 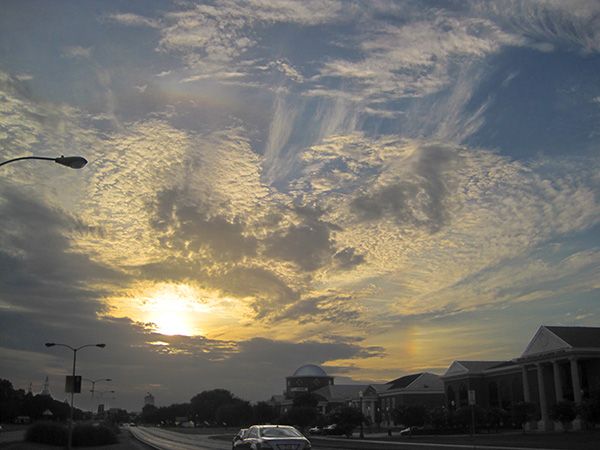 In ACR 6 (the version in Photoshop CS5), that's a matter of using the Recovery slider to bring down the sky. You might be tempted to use the Fill Light to raise the foreground, but that will lighten the darker aareas of the sky as well. You need to use the adjustment brush to bring up the foreground. (Alternatively, you could use the sliders on the "Basics" panel to adjust the foreground to your taste, then use an adjustment brush to put the sky right.) But notice that while some detail has been brought back to the foreground, it's essentially black and white; there's little to no colour information there at all. (And there was an awful lot of noise that had to be removed using the Luminance slider on the Details panel.)

In order to get a satisfactory image in both the foreground and the sky, you would really need to have taken at least two images, one that was properly exposed for the sunset to capture all of the colours in the sky and clouds (which would leave the foreground pretty much black), and one that was properly exposed to record both adequate detail and colour in the foreground. You could then adjust each in ACR to make the best of the area each photo was meant to capture, then combine the two in Photoshop. (Particularly with this image, since creating the mask would be easy.)

It is possible to enhance jpeg images, although certainly not to the same degree as if you had RAW. When editing JPEGs, you will want to keep in mind that compression artifacts will impose the greatest limitation on your editing latitude, as the farther you push your settings, the more likely those artifacts are to show up.

I used Adobe Lightroom 4.4 to make the edits to your image below, however this is essentially the same as ACR in Photoshop, so the edits I list should still be applicable. The key things in the photo you posted are that the scene had more dynamic range than the camera, so you both blocked your shadows as well as clipped your highlights. The image is not necessarily "underexposed", certain parts are underexposed and other parts (namely, the sun) are overexposed. Both of these things can be corrected, and you can actually lift the shadows quite a bit. Based on your comment to Stan's answer, you mentioned you wanted the foreground to be silhouetted, so here is an example: 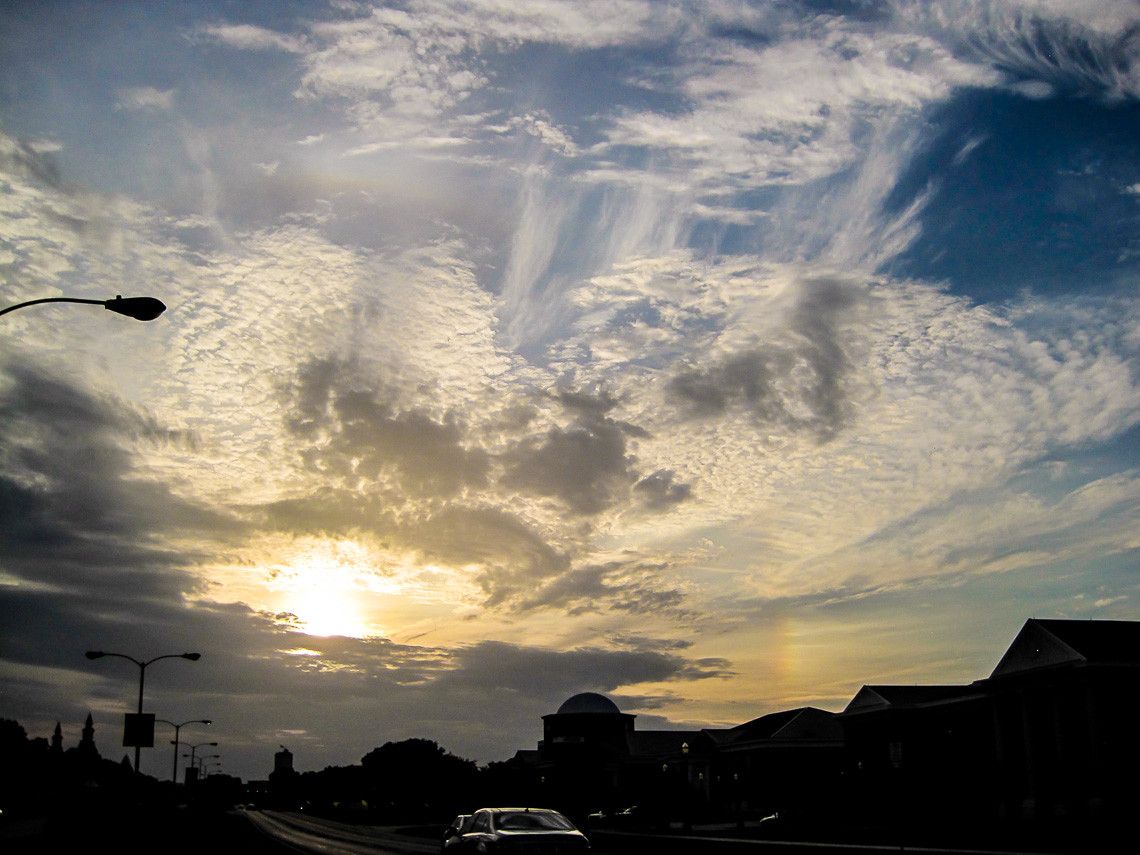 My goals with the above edits were to maintain the crisp clarity of the sky, deepen the contrast between the blue backdrop and the sun, and enhance the colors. I wanted to make sure to enhance the blue without oversaturating the orange/yellow from the sun, which is usually quite difficult to do with just the Vibrance and Saturation sliders...so I applied some selective color channel tweaks as well.

I dropped the blacks, to force the foreground to become darker, almost pure black. It is important to be careful when dropping blacks, as that particular slider has a wide attenuation, and affects the majority of the tonal range (unlike highlights and shadows, which have restricted attenuation.) I pulled blacks down quite a bit, and had to compensate the rest of the exposure by actually BOOSTING global exposure by +0.75.

The most important factor here in terms of enhancing the sky detail was the Clarity setting. I pushed it pretty far, but it is clarity (local contrast) that greatly brings out the sky detail and gives the sky depth..relative to itself. You might also want to play with global contrast, however the effects of that are often more significant to the image at large, and do not really enhance depth as well as the Clarity setting does.

Finally, in order to avoid creating an unsightly edge or halo to the sun itself, instead of pulling the highlight slider way down, I moderated my highlight correction. The whole image was underexposed a bit by the Blacks pull, so I only applied a -20 highlight pull. I used a string Whites pull to attenuate the local contrast in the sky and bring down the brightness of the sun in a less destructive way. To correct the rest of the exposure, I applied the Tone Curve edit. I actually boosted highlights quite a bit to create a nicer "shoulder" to the highlight tone curve, which supports that nicer, smooth falloff of the sun as its bright light fades into the surrounding clouds. I encourage you to experiment with light highlight recovery and tone curve edits like that, and contrast them to a direct, heavy highlight recovery pull in the range of -80 to -100. The difference in the aesthetic of the sun should be clear.

Well, I hope this helps! There are, of course, other ways to edit. Instead of pulling down the blacks to create a foreground silhouette, you can also lift the blacks, as well as shadows, to recover that detail (to some degree...you will be far more limited with JPEG than with RAW.)

Not the answer you're looking for? Browse other questions tagged sunset or ask your own question.

18
What is HDR photography?
3
How to achieve sunset shots without a silhouetted foreground