My question is as follows: In 2006 I bought a Canon EOS350D with a Tamron 18-200, which was a great choice for shooting pictures on vacations, not having to carry around much, etc. Now, this seems obviously not the best choice for taking low-light pictures without flash. Here is an example with ISO 1600 and quite some noise. 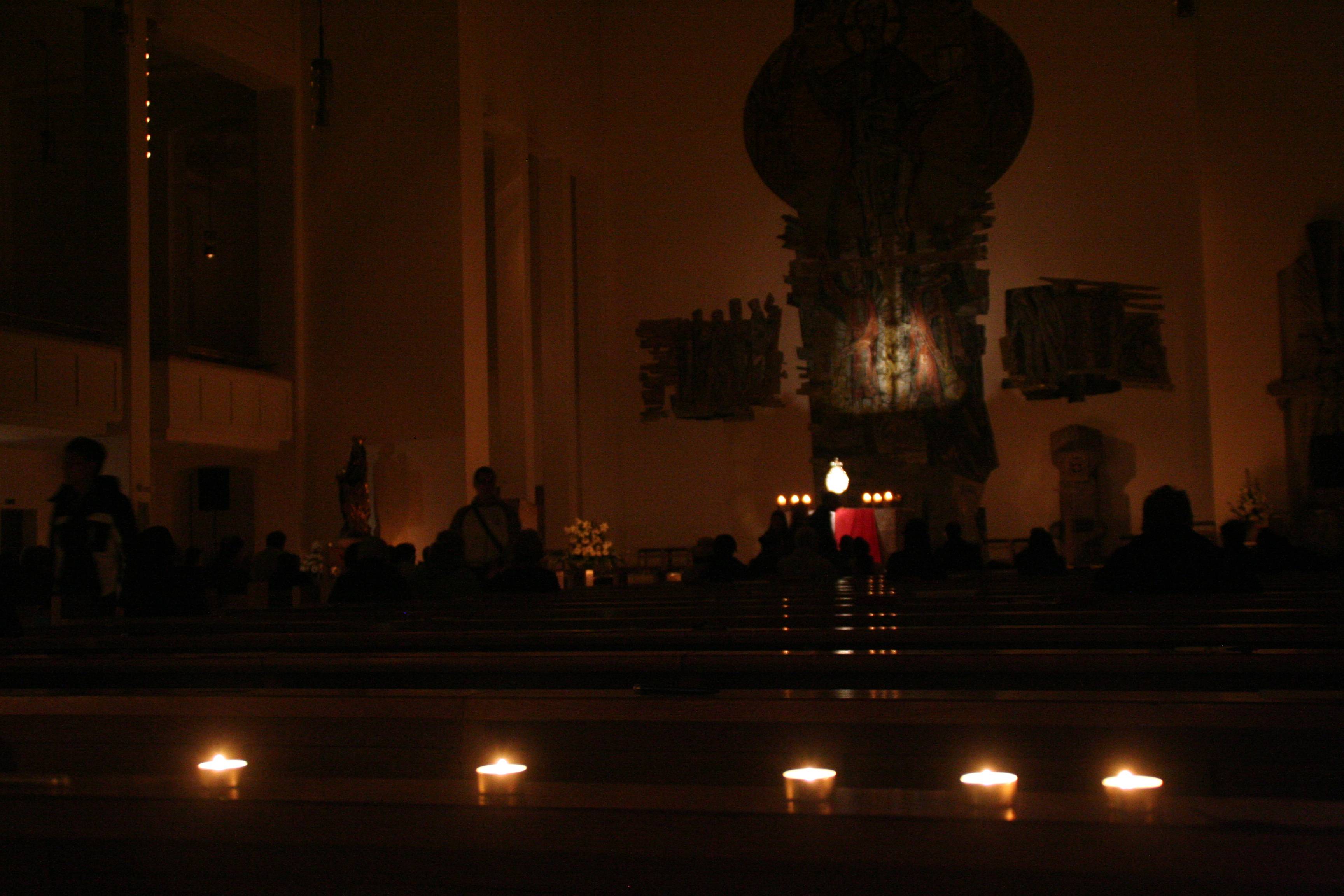 I now think about upgrading my camera/replace it to improve the low-light performance. Two strategies showed up when browsing the web (both quite expensive):

What would be preferable of the above two options? Do you have other suggestions, especially with lower budget (around 1000€), e.g. would it be worth upgrading to the Canon EOS 700D?

To get really good low light performance in an environment like your example picture, you're going to have to forget zoom lenses altogether and go with a fast prime lens and a full frame body. Other than the sweet spot around 50mm (due to the way lenses can be designed for cameras with the typical flange distances of DSLRs), wider aperture lenses get expensive very fast. The further away from 50mm you get, the more expensive lenses with comparable apertures become.

If you are serious about improving your low light performance capability on the budget of what an EF 24-105mm f/4 L IS costs, I would suggest looking at used FF bodies like the original 5D and fast primes such as the EF 85mm f/1.8 or the EF 100mm f/2. For 50mm I like the f/1.4² and feel the faster auto-focus and more usable manual focus as well as the durability are worth the difference. Others feel the f/1.8 is a better value. Be sure to buy from reputable dealers like B&H or through places like amazon marketplace where you have recourse if someone sells you a lemon.

¹ Canon's release of the 80D in 2016 finally gave Canon shooters an APS-C sensor with better low light performance.
² When Canon introduced EF 50mm f/1.8 STM they corrected most of the shortcomings of the older EF 50mm f/1.8 II. I would even recommend it over the EF 50mm f/1.4 for the vast majority of users (including myself if I were in the market for a new 50mm prime for less than $1,000).

For modern SLRs, ISO1600 is not that much of a problem. A lot has happened since 2006 - cameras, such as all technology, evolve.

Now I also think sales advice per se is not generally well liked here, so I will try to be general on the topic of upgrading:

The problem: An old camera no longer suits the user's need, what should be focussed on when upgrading.

If 2) applies, there are other points to focus on:

The last point worth considering: Lenses "age" as well. Professional lenses are getting better, but the improvements are most significant with entry level lenses. Better lenses can be manufactured at ever lower prices. An old lens might not have the resolving power to fully benefit from a newer higher density sensor and might be best replaced too. A newer camera may produce disappointing results if the limiting factor is the lens.

Full frame sensors have about twice the surface area as APS-C sensors, which, at the same technology level, gives about a one-stop advantage. The current generation of sensors is very good, and at higher ISOs will have much more than a two-stop advantage over a seven-year-old model.

That is, full-frame will have a real advantage, but it's not necessarily the most cost-effective way to get a meaningful improvement. That's especially the case if you have a real-world budget and the same money could go to better lenses.

If you have doubts about it, then you probably don't need a full frame camera.

The Sigma 10-20mm (either version) is a really nice (although not very expensive) lens, if only for that I'd stick with an APSC camera, maybe the new 70D, and it would still be much cheaper than a complete change to FF.

Or go really cheap and get a tripod!

Not the answer you're looking for? Browse other questions tagged equipment-recommendation canon low-light sensor-size technology-generations or ask your own question.

9
Should I upgrade my Canon Digital Rebel XTi?
3
What are the differences among these Canon telephoto zoom lenses?
10
Which prime lens to get after the 18-55mm & 55-250mm?
4
Will I see a significant improvement from upgrading from Canon EOS 350D to 550D?
14
Do I need a full-frame camera for low-light photography?
2
Is it bad to use old lenses on a new camera?
1
Will upgrading from T3i to T7i be a meaningful improvement for low light photography in the jungle of Costa Rica?
1
What features should be prioritized when buying a camera intended for wildlife/zoo photography?
0
Quit photography in 2006. Ready to restart, Have good lenses still but need advice on picking right body