How can I exclude nested keywords from a Lightroom smart collection?

I like to keep track of where I take a picture, and of course, what is in the picture. Often the two are not the same: I might be on top of a mountain, taking a picture of another peak.

I have the following key-word-tree:

I use smart collections to keep track of what pictures have not been key-worded yet. Normally I do the LOCATION key-wording first, since it is the easiest. Sometimes I might assign a SUBJECT MATTER keyword before I assign the SUBJECT MATTER>Location keyword.

Since Lightroom 4 does not respect case-sensitivity of key-words in smart collections, I can't make a list with keywords that don't have the Location tag, since Lightroom treats LOCATION the same way. Is there a way that I can make a smart collection that only has pictures in it that don't have the SUBJECT MATTER>Location keyword, without excluding images that have a SUBJECT MATTER>Something>Else or LOCATION>Some>Place keyword? If possible I would like to keep my key-word-tree the way it is (Not change the SUBJECT MATTER>Location keyword.)

When I am faced with such a problem, I put something easier to match in as an un-exported synonym for the keyword: 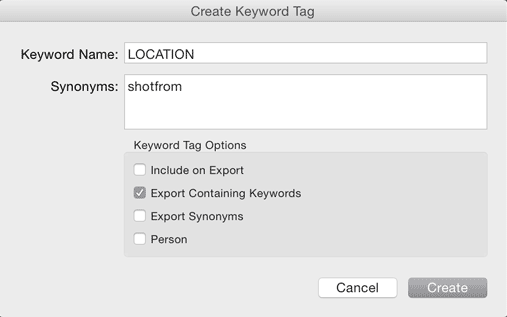 Now I can search for Contains Words → !shotfrom and be certain of finding only photos that are missing a LOCATION keyword, as opposed to a SUBJECT MATTER > Location keyword.

That's a little-known trick there, by the way: Contains Words in combination with the rarely-seen ! operator does something that Doesn't Contain fails to do: find photos that do not contain a particular whole word. Lightroom can do a Doesn't Contain match, but that's a partial-word match. This trick gets you the missing Doesn't Contain Word feature.

This only works when you have a complete word, which is why I spelled it as shotfrom rather than shot from or shot-from. Both spellings are considered two words in Lightroom.

This is tangential to the question you asked, but I avoid this particular problem by using Lightroom's geotagging feature for "shot-from" and use keywords for "shot-of." If I want to find photos taken from a particular location, I can pick them from the Map module.

Yes, this means I do go in and add geolocation information to photos that don't have it from the camera. I actually have a Smart Collection that reminds me when I have a photo that is clearly missing geolocation information. The Smart Collection skips photos where the keywords excuse the lack of a geotag, such as studio, in which case it doesn't actually matter where it was shot.

Think about it this way: if you take a ¾ shot of a friend, do you add a keyword for the type of shoes they were wearing at the time? I don't; they're not in the shot. The same logic goes for not including "shot-from" in the keyword set.

You might also take a look at John Ellis' Any Filter plugin. It allows a search that can distinguish an explicit keyword only (the bottom one of the hierarchy, like Place. But then it can also use a criterion "subkeyword of" which I would think you could use to distinguish the places by only finding the subkeyword of "subject matter."

But couldn't you just change LOCATION to SHOTFROM even without using Warren's excellent suggestion? If I received a bunch of photos from you I'd have to do a bit of head-scratching to figure out the location distinctions, and never would if a photo didn't have both variants.

His advice, though, about changing where you store "shotfrom" is a good one I think. It's worth looking at how the professional journalists who developed IPTC tags thought about this, since they did contemplate distinguishing shotof from shotfrom. Keywords, like captions, are for subject matter, not meta-info about location where taken. There are other tags for that, with todays geolocation being the best. GPS can give the exact spot, and even direction the camera is pointed. And altitude and speed. Reverse geolocation adds city, etc. But if you're in the boonies, then sublocation can be a good place to put "east face Eiger" or something. See http://www.photometadata.org. It's easy to make smart collections from that field since it's a whole different field. Even if you don't use GPS to enter the info, or software to reverse geolocate, you can just enter it as you would a keyword. In that case it won't show on a map, but it sort of automatically provides the info "location of shot>place" in an easier and less ambiguous place. exiftool could probably just copy the explicit keyword into location, or some part of the string of keywords (everything after LOCATION).

Try using Keywords Starts With instead of Keywords Contains. This should allow you to look for ones that don't have an entry for the particular header you are looking for since they look for a match starting from the beginning of the lookup.

Update: Now that I see what you are trying to do, I don't think what you are trying to do is logically what it is actually doing. Hierarchies imply membership in a set. If a lower level keyword is specified, the parent keywords are implied. Thus, if any SUBJECT MATTER has Location, then everyone of them has that same Location unless it is going to a different instance of SUBJECT MATTER.

Not the answer you're looking for? Browse other questions tagged lightroom lightroom-4 keywords smart-collections or ask your own question.