Is there an "Exposure" setting In GIMP comparable to that in Photoshop's Image Adjustments?

In Photoshop, there is an Exposure feature in Image-Adjustments-Exposure which changes the image as if you actually changed the shutter speed on the camera. This effect is generally much more effective than using the Brightness or Contrast features.

So is there a similar feature in GIMP or through a free GIMP plugin? If there isn't, are there any external programs (must be free and preferably portable on a USB) that can emulate this effect?

Gimp doesn't have an Exposure setting like that, which is kind of a lacking point, but on the other hand easily worked-around by using the curves tool instead. It appears that recently, the trend in Gimp has been to focus the software as more a graphics design and image manipulation tool rather than photo post-processing software. That's a bit too bad for us photographers, but the fact is that such adjustments are really better done earlier in the workflow, ideally by getting the exposure right initially — or, failing that, in RAW development.

Anyway, you can see what the Gimp "Brightness" adjustment is doing by using the Brightness/Contrast control and setting the value to +100 brightness, then hitting "Edit as Levels" and in that tool hitting "Edit as Curves". You'll get a Curves dialog similar to this: 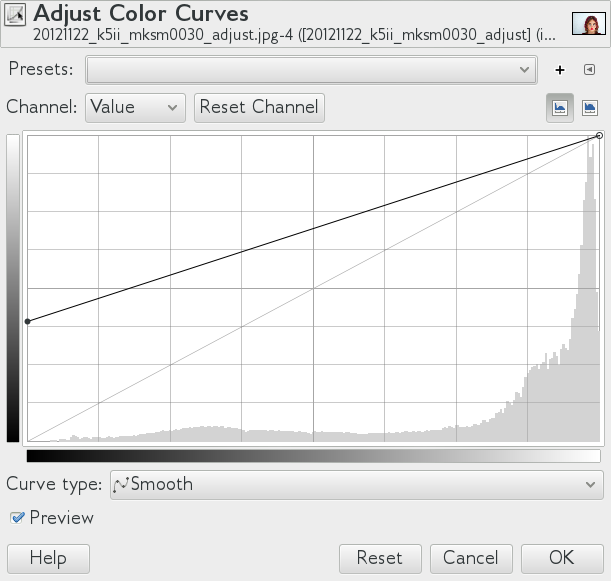 The gray line from corner to corner is the existing file, and the black line is the new mapping.

This is, unfortunately, exactly the opposite of what you want to do to emulate the (non-motion related, of course — we'll take a static scene as a given!) effect of a longer exposure. What you want, instead, is a mapping like this, which is effectively multiplying the brightness of each part of the image by a constant factor: 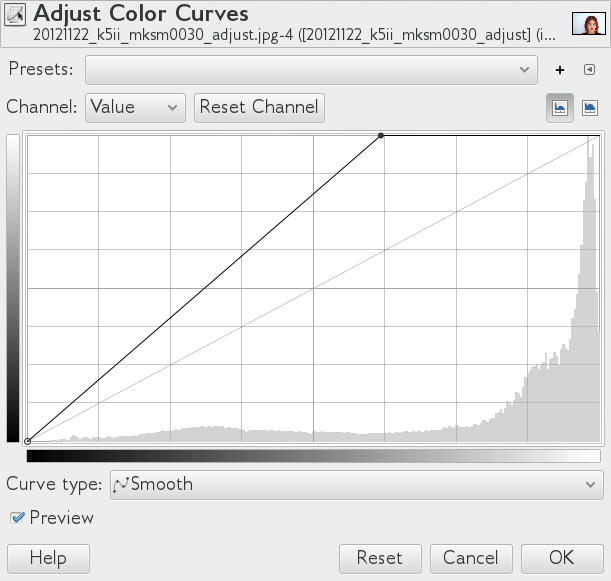 Unfortunately, this interface doesn't give you anything to easily see numerically the amount of increase (let alone in a photography-related idiom like "stops" measured in EV). But, really, what you probably want is something like this: 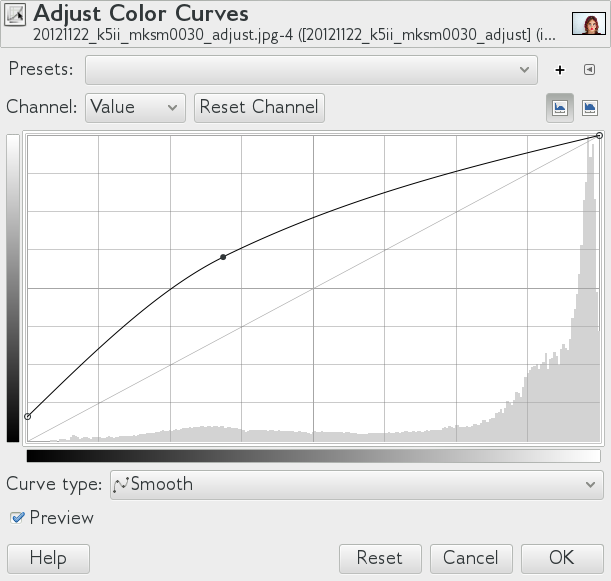 which brings up the shadows a little bit, the midtones even more, and then has a rolloff preserving the highlights instead of clipping them.

Or, you may want this modification of the classic contrast-enhancing "S" curve, which is shifted a bit to add contrast while also pulling up the midtones: 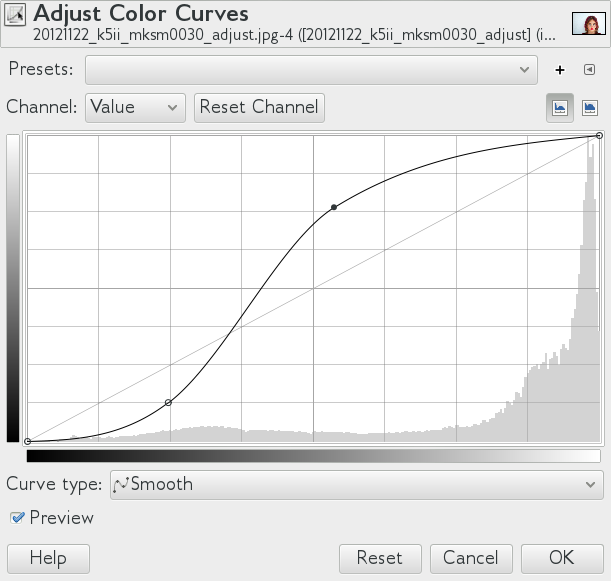 Try these on your own image with "preview" enabled and see what they do. It's unfortunate that there's no easy, EV-based dialog, but overall, the enhanced flexibility is arguably better anyway (in Photoshop too!).

Or (especially when exposure is way off), use Darktable or Rawtherapee or (distant third in the UI department but technically fine) Ufraw before importanting to Gimp.

If you are working with pictures (jpg, for example), you can use levels (or curves) to achieve the effect you are looking for. You can find an explanation here. In short you change the relationship between input and output levels in a more subtle manner than using brightness and contrast. You can find a tutorial here.

If you are using raw files (which is recommended if you wish to recover details from over or under exposed pictures) you can find an exposure slider in ufraw: http://people.zoy.org/~cyril/ufraw_highlight_recovery/

Ufraw is a raw converter which translates the raw data to a picture which can then be opened by gimp.

I have thought of a way to easily artificially change image like as if you were playing with exposure/ISO of the image.

What you do is let's say your image is exposed for 0.5 second.

To simulate exposure of 1 second (double the exposure/ISO), you create a copy (by duplicating) of your image layer put it on top and set mode to Addition. And play with opacity of top layer to simulate variation between 0.5 second to 1 second.

Most likely, when you double the exposure, it'll look over exposed so playing with opacity of this addition mode layer is crucial to get the exposure you want.

My guess would be that Gimp doesn't have an exposure settings cos it is not working on High Dynamic Ranges. Only on low - black to white. And in that low range you can call it exposure settings but it will only be a brightness adjustments nothing else.. If you over exposed image in LDR you will not get any additional information from the white spots by messing with "exposure" or brightness.. it will just look darker..

6
How do I effectively split an outdoor image across an uneven horizon in Gimp?
10
Does Gimp have a Match Color function similar to that in Adobe Photoshop?
7
How can I reproduce this effect I created?
37
Is there a software to automatically crop a scan of multiple images?
3
Photo Processing - What am I doing wrong?
6
Resource for guidance on achieving specific styles and 'looks' independent of software
0
Do adjustments in Photoshop yield better results than similar adjustment in Lightroom?
7
Editing photos for this "milky" and "twinkly," vivid but nostalgic effect?