What to look out for in indoor restaurant photography?

I'm tasked with documenting a company event we are hosting in an restaurant. As you can see the place is lighted but I'm sure it's still consider dark for photography. I'm not a professional photographer, I only shoot as a hobby, so I'm not sure what to expect to document an event like this. What are some of the things I should prepare myself for?

I also want to add that, I have access to a Sony A99 full frame camera and the fastest lens of that system (1.4 primes).

Also, I'm expected to produce results suitable for the web only and no prints will be made.

If the light is not enough then you need a flash! If you have a full-frame body that can shoot high ISO with not so much noise then you might not need the flash but generally speaking indoor photography in the night needs flash.

You should point out the flash to the roof IMHO and let the reflection from the walls and roof light the environment.

Depends! If you are interested in people attending the event, then you need a zoom but also, it's always a good idea to have some wide angle shots for indoor. It gives a sense of the size and tells the story of the event. Long story short, you probably need both.

You probably will interrupt anyway! If you have to document the event, then don't bother yourself about interruption. You need a flash and your flash would be interrupting. If you are going to fire your flash every often, then forget about the interruption and stick to your photography duty. In other words, if you think you are going to have a good shot but you are afraid to interrupt, don't worry and take your photo! Obviously this last statement doesn't hold for privacy of the people attending the event.

I can suggest you three things.

it would be a very good idea to go to the place prior to the event and study the place, find your spots and plan your photography session.

If you are going to have group photo at the end find a good location for that as well. This is one of the very first things that wedding photographers learn. Finally, depending on the type of event you can shoot your photos with a warm tone (this is a matter of post processing if you shoot in raw). If you look at the commercial photos of restaurant they all have a warm toning to created a sense of friendliness. However this last suggestion is more a matter of personal preferences. 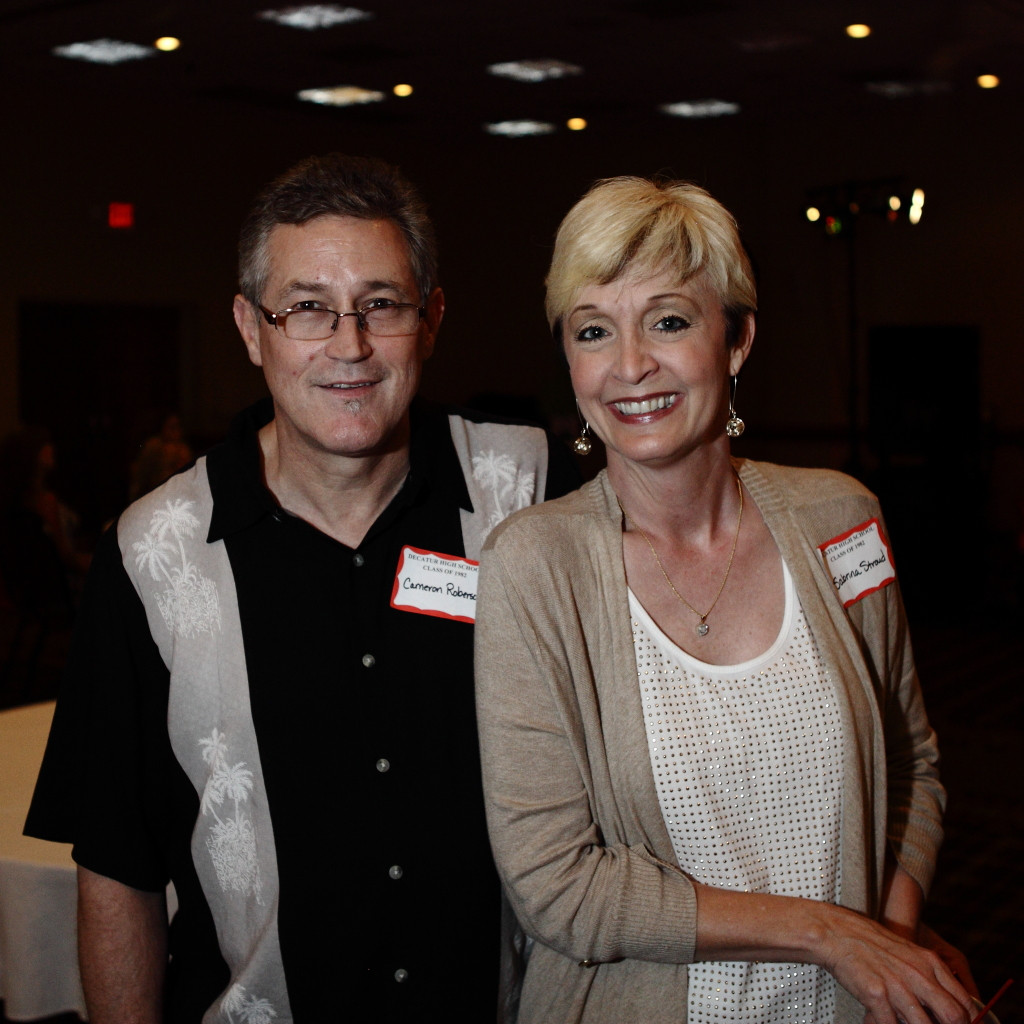 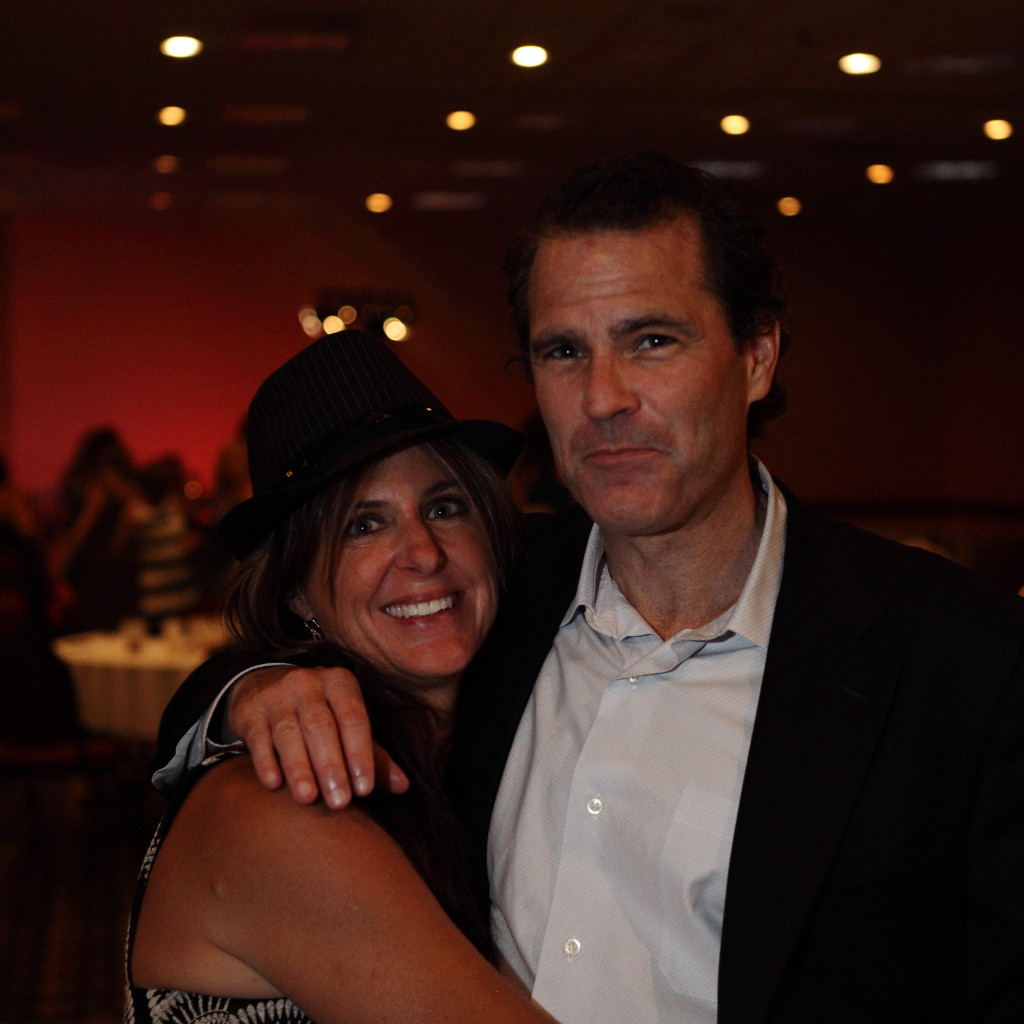 I would certainly say that it appears to be dark in that restaurant. I would highly recommend a flash unless you are using a very high end camera (and even then it would be a good idea.)

You aren't going to have much luck bouncing off the ceiling since the ceiling appears quite dark, so you'll need to use either diffusers, reflectors or soft boxes on the flash to prevent harsh shadows. I don't think gelling the flash should be necessary as the light appears to be incandescent rather than florescent. Michael Clark pointed out that an orange gel might be helpful to match the background lighting.

The focal length needed depends on what sensor size you are shooting on. For full frame, covering the 24 to 70mm range should work pretty well. If there are any presentations during which people will be seated, a good telephoto would also be a plus to have. If you are shooting on APS-C, adjust accordingly based on crop factor.

As far as deciding how far to shoot from, there are a few different philosophies. You don't want people's back's blocking the shot, but if you can get the shot from a distance, then you will be less obvious and in the way.

Play around with the flash power to get a good balance between room lighting and fill lighting too. The best balance point is going to depend largely on the capability of your camera, but I'd try to shoot with the room lighting having the most impact on the feel of the photos I could since it looks like an interestingly (if dimly) lit place. You want the flash to fill in the faces, not overwhelm the existing lighting, unless you can't get a sufficient exposure without using the flash as the majority of the lighting.

Other little things, be sure to bring extra batteries and have a comfortable camera strap. A decent monopod would also be a decent investment. Wear comfortable shoes with good support. You'll be on your feet a lot and holding the camera a lot. Depending on the size of your camera, it can take a toll after a while if you aren't prepared for it.

Not the answer you're looking for? Browse other questions tagged flash indoor event event-photography or ask your own question.

20
How do I prepare best for my first wedding photography event?
2
How to shoot a shot with the moon and city skyline?

6
What tips can you offer for indoor architectural photography?
5
What settings should I use when growing out of auto modes for indoor photography?
3
How do I best use a pop-up flash for indoor birthday parties?
7
What method can I use to create an indoor panorama?
0
Technology stack for event photography with multiple photographers
1
How Much Should I Ask for Photographing [School] Groups at an Outdoor Center and How Much Commission Should I Pay to the Outdoor Center?
3
Indoor flash photography in large auditorium...how to achieve excellent quality results?
2
How can I improve my indoor sports photography with Sony a6000