Where does the strange purple/blue glow around the headlight wearing subject's front come from?

I've found that a few of my recent trip photos have this odd artifact/ghosting resulting in a blue/purple glow around the helmet(see below pic): 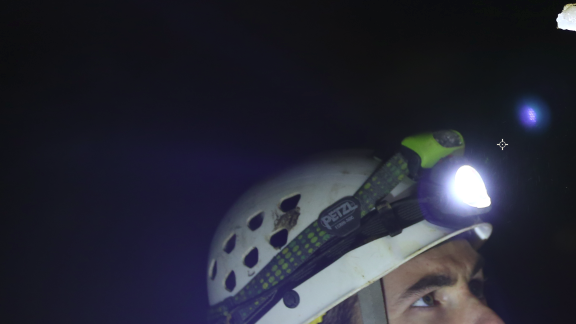 I've found this question which i think relates to what I'm experiencing, I undersand the bright spot in front of the head torch, but I don't understand why the area behind the helmet is lit up like this?

This is the original image: 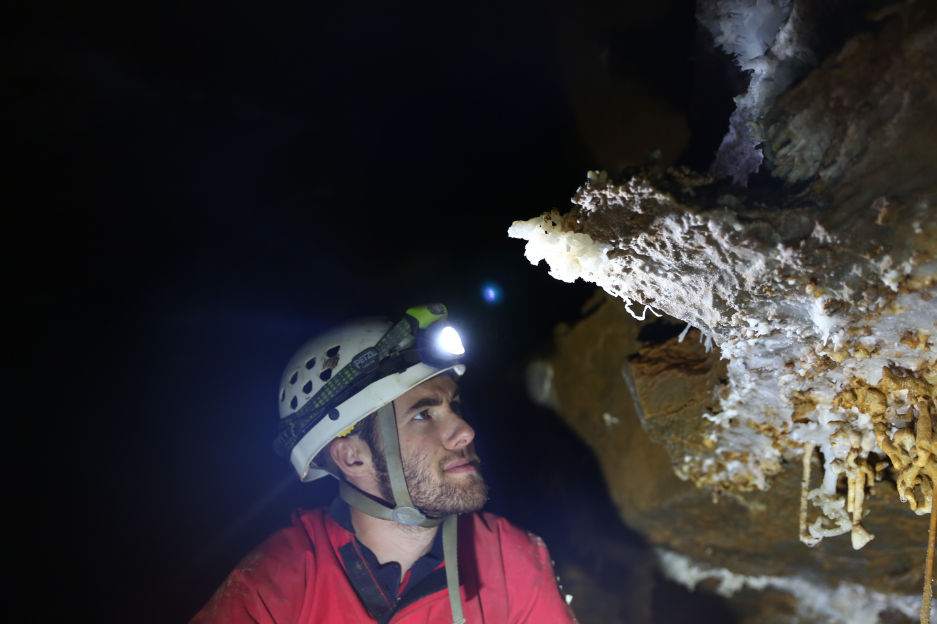 If the index mark on your photo was at the center of the original image, the purplish blotch above and to the right of it is a ghosting of the bright light source the same distance to the lower left of it.

Ghosting is caused by the light from extremely bright sources (relative to the rest of the scene) reflecting off the front surface of a lens element or even the IR filter on the front of the imaging sensor and then bouncing back to the sensor from the rear surface of an element further forward in the optical path. The most likely culprit when using modern lenses with multi-coated elements designed for digital use is the back side of a screw on filter placed on the front element of the lens. Film was not as reflective as the front of a digital sensor assembly and lenses created during the film era often did not have anti-reflective coatings on the back of lens elements which can also lead to ghosting.

The more diffused glow in the lower left of the photo was probably caused by some form of localized moisture between the helmet light and the camera. It could have been patch of air supersaturated with moisture, similar to fog, or it might have been the lower left portion of the front element of your lens had a small spot of condensation on it.

This looks like some form of lens flare to me, it could be caused by one of the coatings in the lens in effect "glowing" as it is struck by light at an angle.

I believe this is known as "veiling flare" or Haze

Do you have a protective filter attached with your lens? Most of the time they are the most common factor of lens flare. Most Lens especially those expensive lens are multi-coated and cannot create flares at all.

First just to say: This is great picture :)

I think that blue spot is definitely result of lens flare.
Really interesting area is around helmet. You were too close to the rock, and your light source (probably LED) was so strong, which caused light to reflect from rock, and then it reflected from your white helmet around the area, and together with dust particles, it created this blue effect.

Not the answer you're looking for? Browse other questions tagged canon artifacts canon-5d-mark-iii lens-flare ghosting or ask your own question.

5
What creates this strange flare and how to prevent it?
1
Why is there a secondary image of a light bulb in my image?

12
Where does this reflection come from in a long exposure shot?
3
Why is there a subtle shadow glow around the subject with large aperture?
5
Where do these “redshifts” and “blueshifts” come from?
11
What's the reason for this exceedingly blue reflection from buildings in this image?
3
Are these weirdly-shaped purple stains really from particles under the first layer of the sensor, and if so, what can I do about it?
12
Why does this satellite image of an airplane in motion show red, green, and blue bands with strange artifacts?
7
What could cause this visible artifact which seems to a be a glowing inverse of something outside of the frame overlayed on this photograph?
0
What causes the “glow” around objects when turning down highlights and brightening shadows?
0
Where does this yellowish shadow artefact come from?